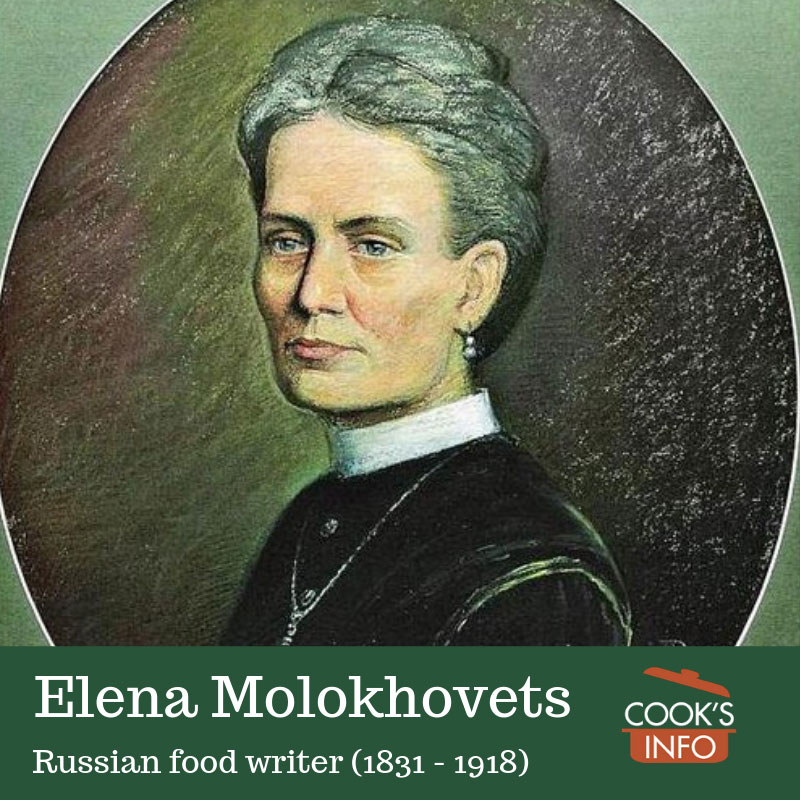 Elena was born in 1831. Her father, whose last name was Burman, was a customs official in Arkhangel on the White Sea, and a minor noble. She was educated by the Imperial Educational Society for Noble Girls. She married Franz Molokhovets, an architect (died in 1909); together they had nine sons and one daughter. One son went on to become a general; another died in 1905 at sea during the Russian-Japanese war; the daughter died in the same year as her father.

In 1861, when she was 30, the family moved to Kursk, in south central Russia, near the Ukraine border, where her husband worked for the government there.

Elena’s husband was supportive of her being an educated woman with a writing career. She was able to move in society, and had access to minor Russian nobility.

The 1861 edition of her book had twenty-two chapters and 1,500 recipes. In the 1880s, she added sections on caring for domestic animals, health and hygiene, and caring for children and sick adults, but these were dropped in later editions. The book remained the handbook for middle-class and upper-class women in Russia until the revolution of 1917; she herself kept revising it herself up until 1917, by which time it had over 4,000 recipes in it.

After the Russian Revolution, it disappeared from print, with only hand-copied versions available, until it re-appeared in print in 1989. An English translation by Joyce Toomre (Bloomington: Indiana University Press, 1992) covered 1,000 of her recipes and summarized her advice. 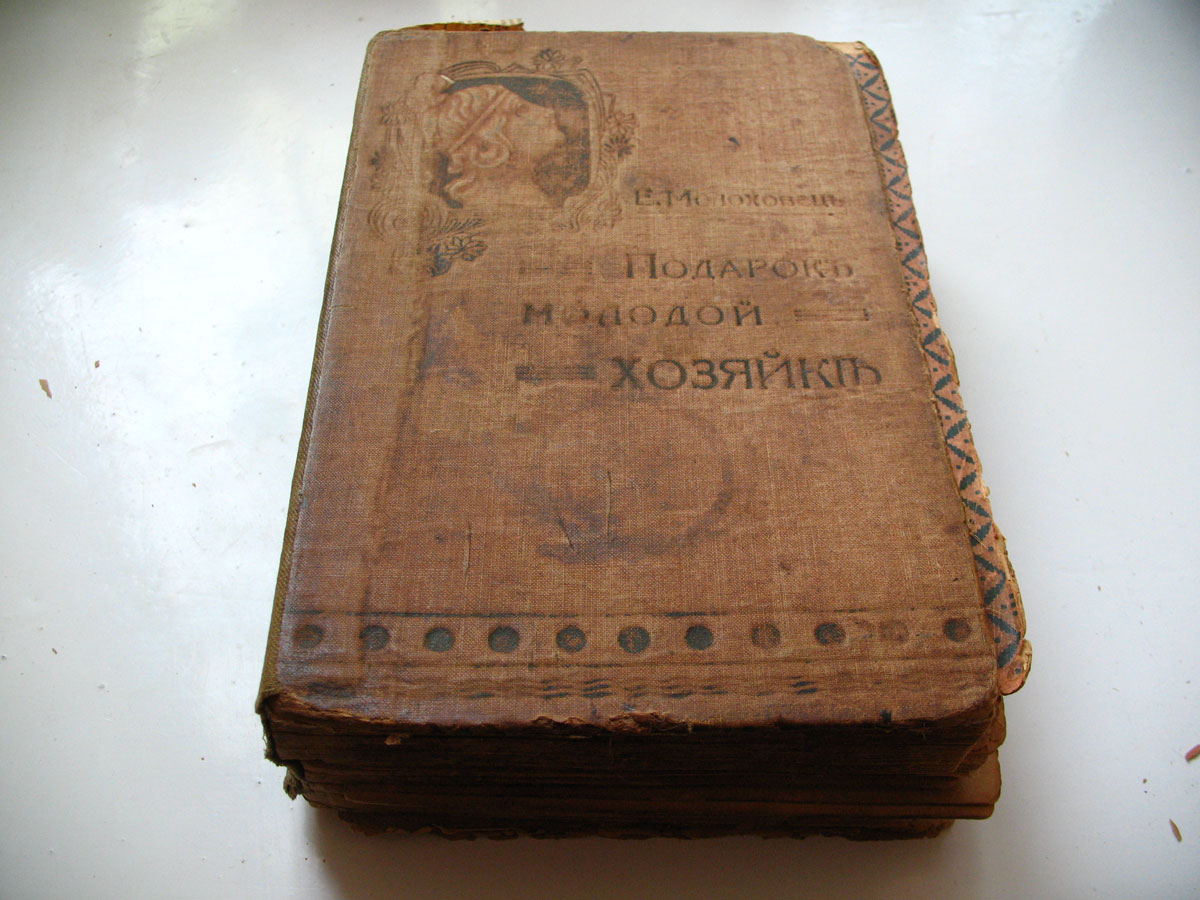 Elena included French cooking that was popular among the Russians, along with traditional Russian recipes that were used by the bourgeoisie. She used old Russian measurements (Russia did not begin switching to metric until after the 1917 Revolution) such as “buckets” (the Russian bucket was 12.3 litres, whereas the British Imperial bucket was 18 litres.)

She advises the reader how to set up a household, covering from picking a place to live to choosing kitchen equipment to how stoves work. Some of her recipes assume kitchen help, in calling for 70 egg yolks to be beaten for an hour, or boning 40 quails. But she tells the reader how to manage servants and serfs, and counsels that housewives should give the bones from their roasts to the servants to make soup for themselves from. 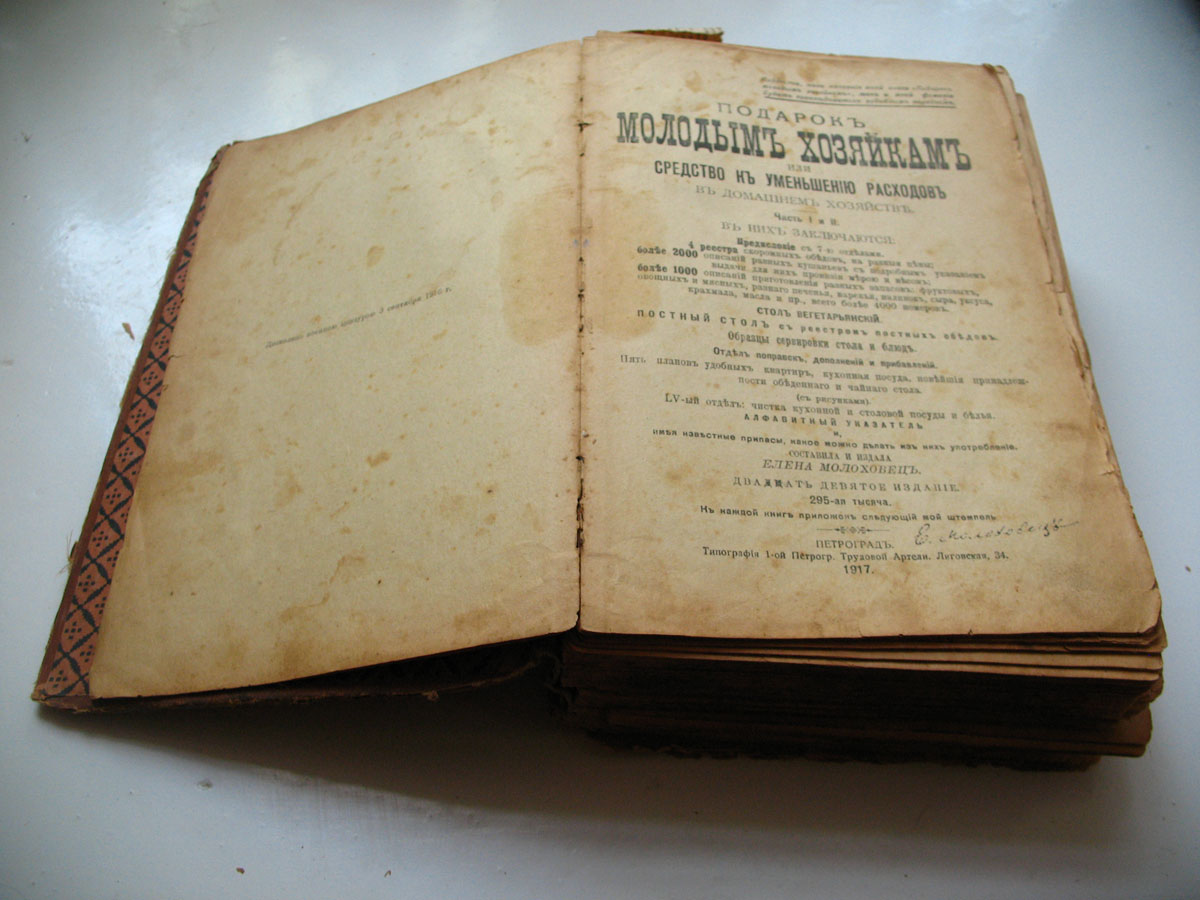 She assumes that the housewife’s stores will be in the same house rather than ten minutes away by car — for unexpected guests, she advises going to the cellar and getting a hindquarter of pork. She also covers shopping, however, and the difference between obtaining food in the city versus obtaining food in the country. She would even specify what kind of water to use, hard versus soft water, and of water safety, and when different types of water were available (e.g. what water sources would be frozen when.) She distinguishes between rain, river, well, pond and river water.

She shows the reader how to preserve food, including herbs, and gives recipes for making over thirty-five different kinds of flavoured vodka. Her recipes mention three different types of butter: table, Russian and Finnish. Some of the ingredients she calls for are no longer available anywhere.

Beef Stroganoff recipe, first appeared in 1871 edition of A Gift to Young Housewives. From 1887 edition. Wikimedia / 2015

She covers food preparation during Lent. For Easter, she prescribed a table set with a white tablecloth, the best porcelain, the best cutlery, decorated with centrepieces of fruit, hyacinths, lilies of the valley, and narcissus; for food, a lamb rubbed with butter and roasted, baked ham and venison. And in front of each guest, a painted Easter egg.

The food historian Margaret Visser says of Molokhovets: “It’s an enormous book, and very lavish. The Russians themselves, in recent years, have treated Molokhovets either with disdain or envy — they can’t believe how well they used to eat.”

Despite the luxuries that are available in her book, it’s important to understand that Elena had two guiding principles: economize for the family, spend lavishly on guests.

She died in St Petersburg (some sources say 1918; others just say during the turmoil of the Revolution.)

Russian culture is slowly starting to remember her, though she was suppressed during the Soviet years. A restaurant has now (as of 2006) opened in St Petersburg called “Mechta Molokhovets” (Dream of Molokhovets), featuring traditional Russian food.

Elena was not the only woman who wrote about food in Russia in the 1800s — there were others such as Ekaterina (Katerina) Alekseevna Avdeeva (1789 to 1865), who published 4 cookbooks between 1842 and 1848 — but she was perhaps the most influential. 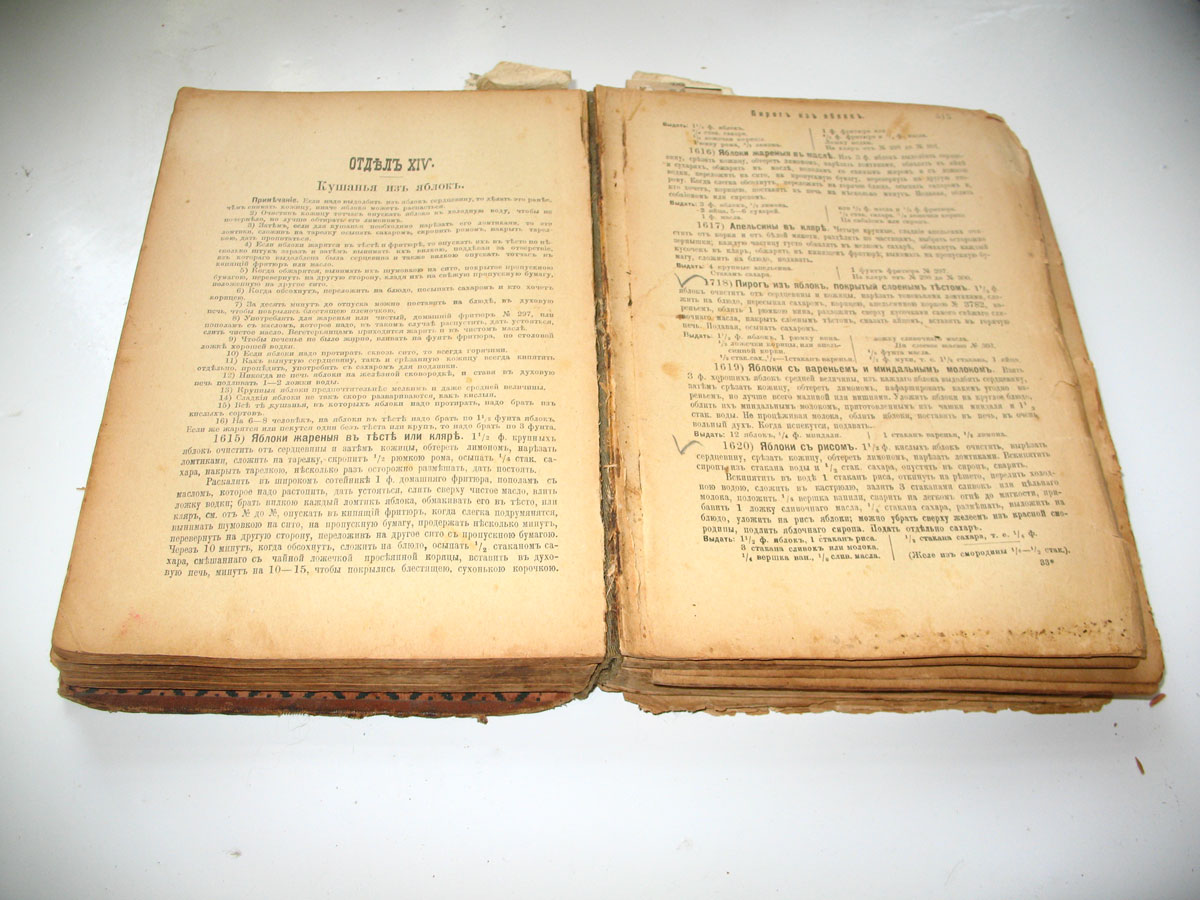 This web site generates income from affiliated links and ads at no cost to you to fund continued research · Information on this site is Copyright © 2023· Feel free to cite correctly, but copying whole pages for your website is content theft and will be DCMA'd.
Tagged With: Russian Food