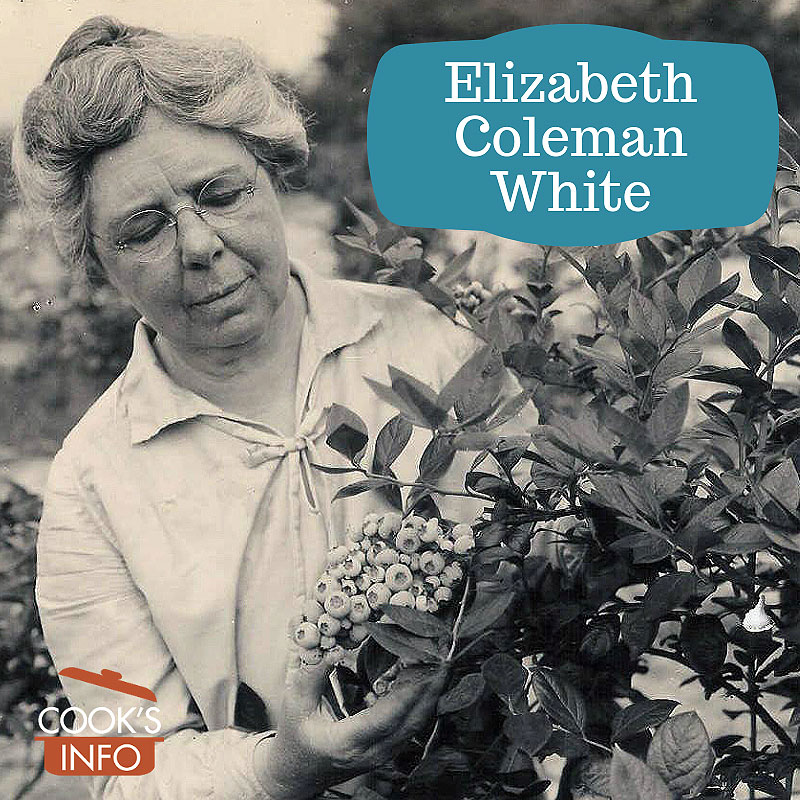 Elizabeth Coleman White was the first person to grow cultivated blueberries for commercial production. She did this in partnership with Dr Frederick V. Coville, who would later become a well-known plant breeder in his own right.

She was born 5 October 1871 in New Lisbon, New Jersey. Her parents were Mary Fenwick and Joseph J. White, both Quakers, who ran a business called “J.J. White” on a 3,000 acre cranberry farm they called Whitesbog. She was the first of four children to be born to them, all daughters.

In 1887, Elizabeth graduated from Friends Central School in Philadelphia and went to work on the farm. Over the next few years, she also did courses at Drexel University in topics such as first aid, dressmaking, etc., but decided she was actually really was interested in the farm business.

In 1910, she went up against the National Child Labor Committee who said that children helping harvest cranberries were poorly treated industry-wide; in 1914, she got them to print a retraction.

In 1911, Elizabeth read USDA Bulletin #193, “Experiments in Blueberry Culture,” a 1910 report by the United States Department of Agriculture (USDA) on the work of Dr Frederick V. Coville. Colville was a botanist at the U.S. Department of Agriculture. In the bulletin, he was discussing the question of raising blueberries domestically. [1]Buchan, Perdita. Blue Heaven. Morristown, New Jersey: New Jersey Monthly. 16 June 2016. Accessed August 2019 at https://njmonthly.com/articles/historic-jersey/blue-heaven/

She persuaded her father to offer Colville some fields on the farm for testing, and then when her father agreed, she set about inviting Colville to do some of his research at their farm; he accepted.

“The Whites signed a contract with the USDA, which gave them the right to half of the propagating material during its four years of testing. At the end of that period, it became the property of J.J. White, Inc.” [2]Buchan, Perdita. Blue Heaven.

She hired some wild blueberry pickers to locate blueberry bushes which had relatively large fruit that tasted good. It’s interesting to note that owing to the time of the year (July / August) when she first got pickers to scout out plants for her, all the plants she would end up developing from this first effort would end up being late season plants.

They gave each picker a kit. A small gauge to measure the berries with, some jars for the fruit, and some wooden markers to label the plants with.

Elizabeth and Coville took cuttings of these bushes back to the farm and started growing them and crossing them. They named the bushes after the pickers that found them. One of the most famous varieties they developed they named the “Rubel” because it was found by a person named “Rube Leek.”

In 1916, she and Colville got some cultivated blueberry bushes to produce a crop of 600 quarts.

Elizabeth at first had been shipping blueberries to market covered with brown paper to stop them from spilling out of their baskets. But after seeing cellophane on candy, she realized cellophane would do the same job, and allow consumers to see the fruit. She was the first one to ship blueberries in this way. She also ran a blueberry bush nursery and sold the bushes.

She was also interested in holly plants and sold them through a separate business, Holly Haven, Inc.

Even though she was the business person in the family and clearly astute, her father didn’t leave the business to her when he died, because she was a woman. Instead, he left it to one of the men one of her sisters had married.

In 1927, she organized the New Jersey Blueberry Cooperative Association.

Elizabeth died of cancer 11 November 1954, aged 83. Her ashes were spread on the farm. She never married.