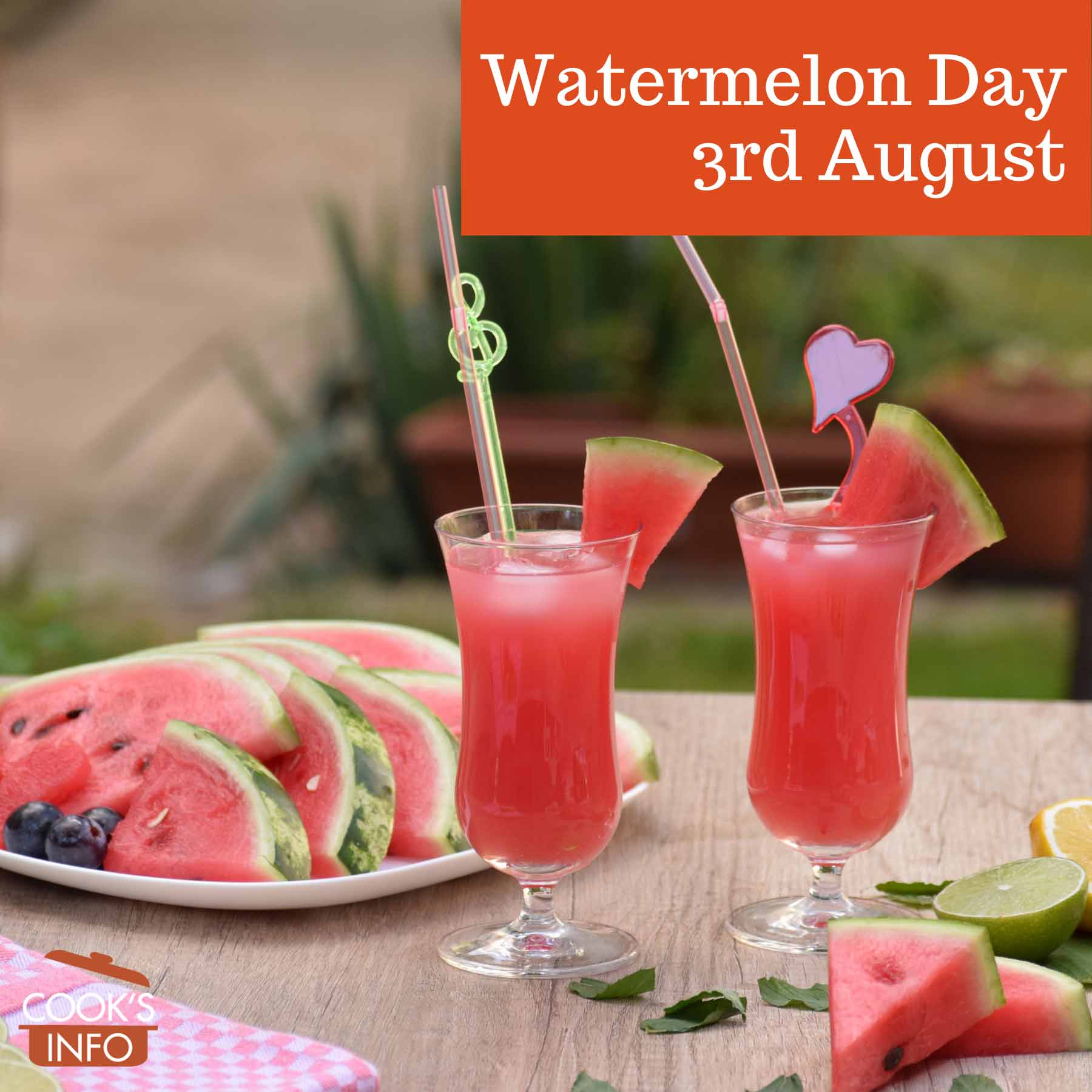 The 3rd of August is Watermelon Day.

What a refreshing, sweet and juicy day it is!

Eating watermelon provides one of the few occasions in Western dining when you are allowed to spit in polite company while eating.

When you slice watermelon, do you cut it into wedges or triangles? However you slice it, the rind provides a natural handle for the slices. Before you slice it, remember to wash the outside well, with a produce brush even if you have or, or your knife will press any bacteria on the outside into the interior of the watermelon.

Do you like to sprinkle a bit of salt or extra sugar on your slices?

Most watermelons seem to come big enough to feed a small crowd. If a whole one is too much for you, your local supermarket may offer them in sections.

Typically we think of watermelon as being a vibrant red inside, but depending on variety the colour can range from pink to orange. Have you ever had a watermelon that is a different colour inside.

The Japanese play Suikawari, in which a watermelon is swung at like a piñata.

The Japanese have mastered the art of growing square watermelons; have you ever seen one?

Watermelon safety caution: watermelon is a low-acid fruit. That means that if any home canning is attempted with it, an update-to-date, tested recipe from a credentialled source should be used to ensure that sufficient acidification to avoid botulism has been provided for.

The earliest print mention that CooksInfo is aware of for a Watermelon Day on the 3rd of August dates from 1997 in Pennsylvania:

“National Watermelon Day is August 3. Nothing says summer quite like a juicy slice of watermelon. Indulge yourself, it is even low calorie and fat. Savor the flavor, let the juice run down your chin, spit the seeds as far as you can (outside of course.)” — Feather. August a month to slow down and relax. Lebanon, Pennsylvania: The Daily News. Saturday, 2 August 1997. Page 1B, col. 3.

In earlier years, the 1980s, a watermelon tasting event had been held on Capitol Hill in Washington, D.C., at the end of July, and those days were said by the newspaper reporters at least to be National Watermelon Day.

“Tuesday [Ed: Tuesday, 30th July 1985] will be declared National Watermelon Day in ceremonies from noon until 2 p.m. in Washington. Members of Congress are slated to participate as well as federal officials and representatives of the National Watermelon Growers Association.” — Bozman, John. Action Picks up at Farmer’s Market. Salisbury, Maryland: The Daily Times. Monday, 29 July 1985. Pages 1, 8. 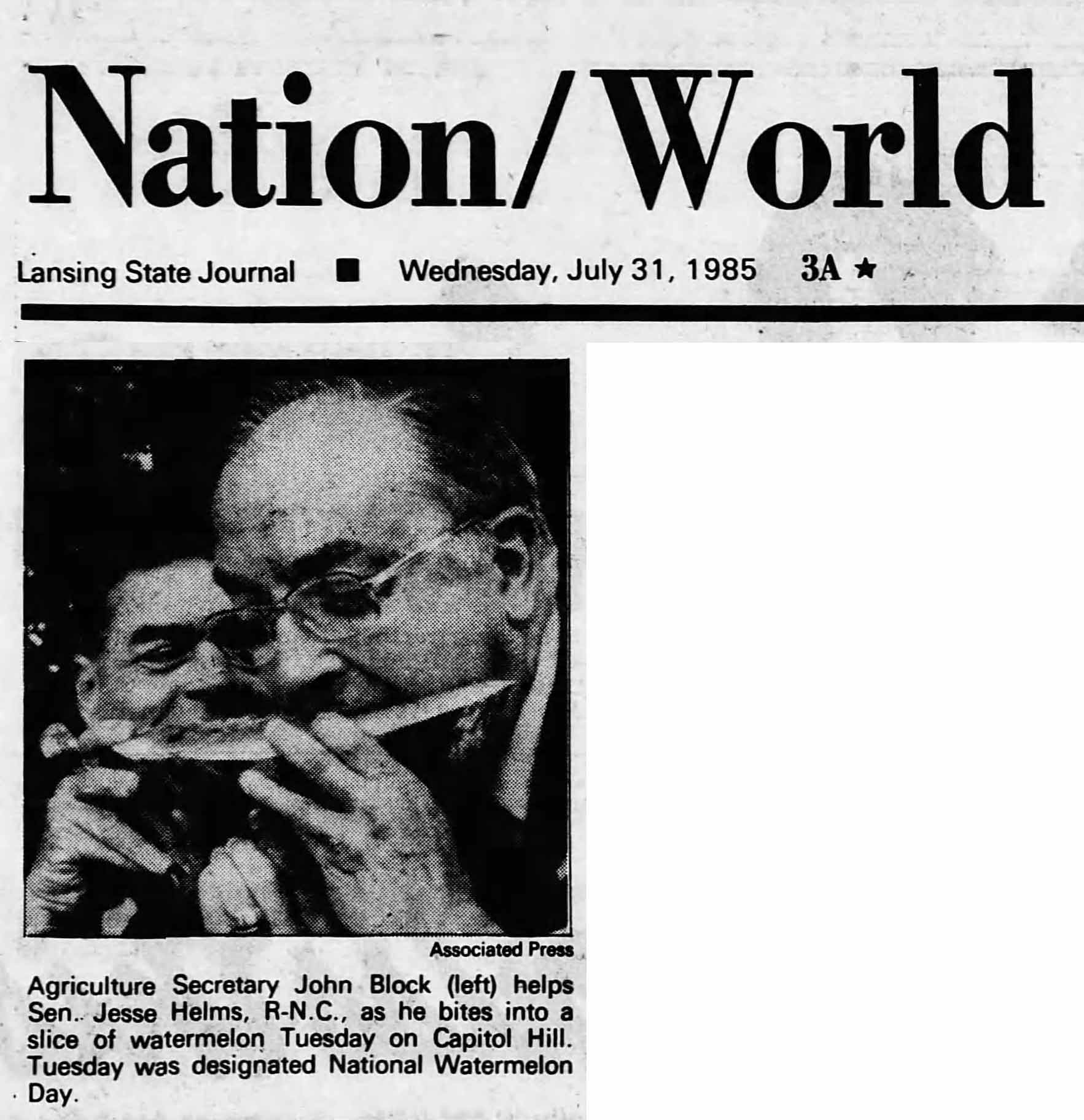 Wright, Bruce C.T. How Did National Watermelon Day Become A Thing, And Why? No One Seems To Know. Silver Spring, Maryland: NewsOne. 3 August 2020. Accessed June 2021 at https://newsone.com/3988252/national-watermelon-day-elusive-facts-history/

This web site generates income from affiliated links and ads at no cost to you to fund continued research · Information on this site is Copyright © 2022· Feel free to cite correctly, but copying whole pages for your website is content theft and will be DCMA'd.
Tagged With: Watermelons