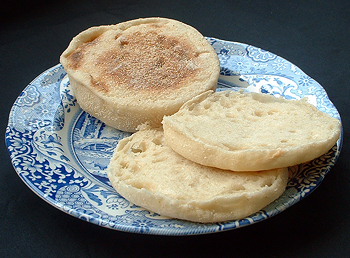 English Muffins are round, flat, yeast-risen breads about 4 inches wide (10 cm) and half an inch to an inch thick (1 to 2.5 cm.) They are not baked in an oven but cooked on top a griddle. They have a soft, coarse, bread-like texture to them, with lots of small holes inside. They are solid though on the top and bottom.

The dough used to make them is firm enough to hold its round shape on its own. The dough is let rise, then its rolled out and cut into rounds. It’s then let rise again until double in thickness. The top, bottom and sides may be slightly floured, or more typically, dusted with cornmeal to stop them from sticking to the griddle. They were cooked on a griddle, as not many people had proper ovens.

To use, they are cut in half horizontally then toasted till parts of them are crunchy, then buttered and eaten warm. They are sometimes sold “pre-split”, making them easier to separate. Some people feel this is cheating and argue vociferously that you won’t get as many hills and valleys to trap and hold butter as you would if you used a fork to do it completely yourself.

English Muffins always seem stale when cool. That’s why you have to toast them, unless you are lucky enough to be standing by a griddle that they are coming fresh off of.

Cornmeal would, of course, be a relatively modern innovation to the recipe.

Have you seen the muffin man who lives in Drury Lane?

This web site generates income from affiliated links and ads at no cost to you to fund continued research · Information on this site is Copyright © 2022· Feel free to cite correctly, but copying whole pages for your website is content theft and will be DCMA'd.
Tagged With: British Food, English Breads