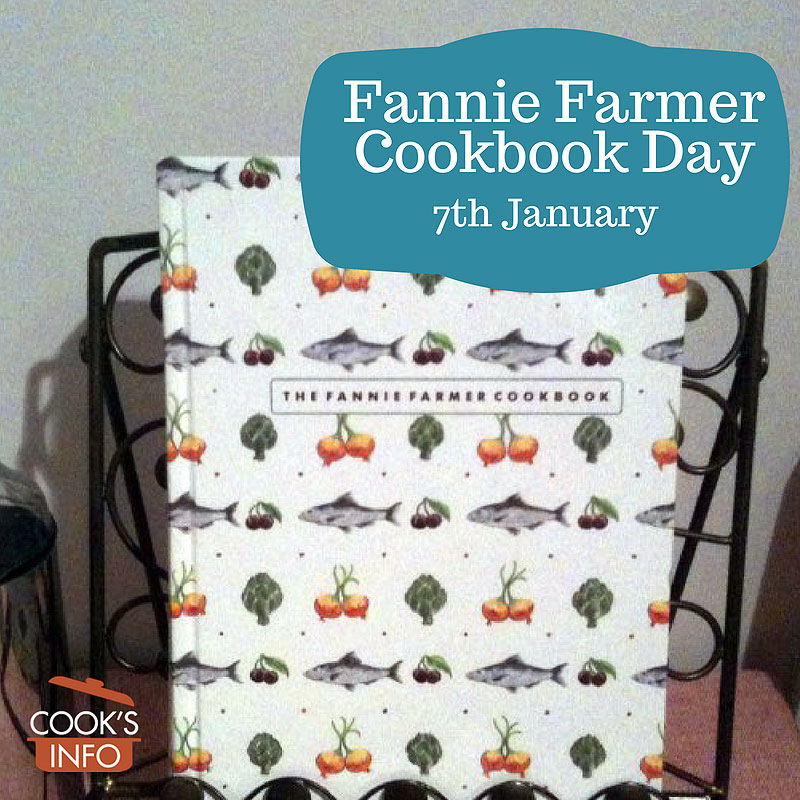 The 7th of January commemorates the 1896 publication of the Boston Cooking School Cookbook, now simply referred to as the Fannie Farmer Cookbook after its author. [1]CooksInfo has been unable to determine exactly who decided to designate today, and if the 7th of January 1896 was perhaps the actual day of first sale rather than literal actual publication date. But a writer in the Boston Magazine in 2016 asserted the 7th January date: “The format of a modern recipe — teaspoons and all — has roots in Farmer’s influential cookbook, The Boston Cooking-School Cook Book. Published on January 7, 1896, it was one of the first cookbooks to emphasize the importance of standardized measurements — and millions of copies later, it’s still in print.” —  Bilis, Madelaine. Fannie Farmer’s Revolutionary Cookbook Was Published Today. Boston, MA: Boston Magazine. 7th January 2016. Accessed December 2020 at https://www.bostonmagazine.com/news/2016/01/07/fannie-farmer-cookbook

Written by Fannie Merritt Farmer, the cookbook would remain the definitive cookbook in the American kitchen until the Joy of Cooking by Irma Rombauer started to displace it in the 1940s.

A cooking school teacher, Farmer even taught her readers how she wanted her measurements done.

She covered the basics — from white sauce to Sauce Béarnaise — in a simple, no-nonsense manner.

A single woman who never married, she was a feisty redhead who overcame partial paralysis as a teenager to become successful professionally and financially.

This web site generates income from affiliated links and ads at no cost to you to fund continued research · Information on this site is Copyright © 2022· Feel free to cite correctly, but copying whole pages for your website is content theft and will be DCMA'd.
Tagged With: American Food, Cookbooks