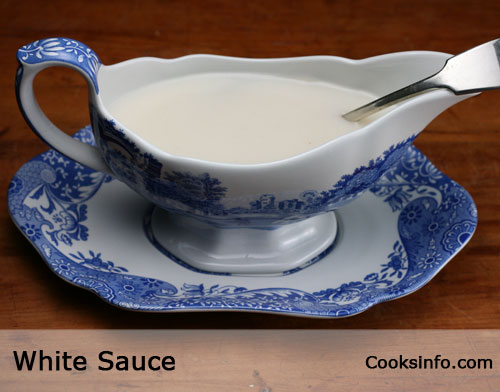 White Sauce is the English term for what the French call “Béchamel” sauce, a simple foundation sauce whose liquid is milk.

A white sauce is very easy to make. It has just three ingredients: flour and butter and milk.

All you have to do is memorize this table of proportions, and get yourself a whisk, and you’re set for life. You can print it out and tape it somewhere in the kitchen until it becomes second nature. This makes 1 cup / 8 oz / 250 ml of white sauce. Note that the portion of milk doesn’t change; you just use more butter and flour (in equal portions, too, which is a bonus for easy memorization) to make thicker versions of the sauce.

Use this much flour and butter, depending on how thin or thick you want the sauce to be:

(Note that what the French call “white sauce”, “sauce blanche”, uses another liquid instead of milk such as stock, water, etc. In French cooking, white sauce becomes a “Béchamel” when you use milk as the liquid. To make a French “sauce blanche” use water or stock in place of the milk above.)

Plop the butter in a saucepan, over a medium heat. When the butter has melted, stir in the flour, and cook the flour for 1 to 2 minutes. You want the flour to cook so it doesn’t give the sauce a raw taste, which it would otherwise. When white, floury froth starts to appear in spots the flour is cooked enough. At that point, you spring into action with the milk, because you don’t want the flour to brown. Pour in a bit of milk, and whisk it all in in. Pour in more milk, and whisk it all in, too. Repeat until all the milk is in — all in all, adding the milk in 5 or 6 pours. Now, lower the heat right down to a simmer, and let the sauce cook for about 10 minutes. Give it a whisk a few times in the first couple of minutes, but there won’t be much action at that point. However, as you approach the 6 or 8 minute mark, it’s going to thicken all at once. (If you really curious as to why, see entry on Thickeners.) At this point, you really need to be there with your whisk to keep it all smooth. Once all the action has happened, you can relax a bit with the stirring. After 10 minutes, your sauce is done. Season it to taste, and use it as required. 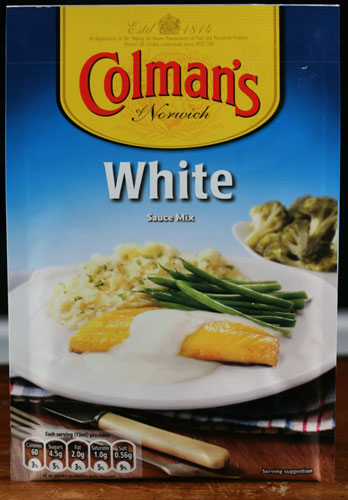 Some people report that using an aluminum pan can turn the sauce grey.

Neither the butter nor the ensuing roux should be allowed to brown.

You need a whisk.

Don’t even think of using shortening or lard instead of the butter. You might get away with margarine.

If you are not going to use the white sauce right away, in order to prevent a film forming on top, take a tablespoon or so of butter, cut it into small pieces and scatter them over the surface. As the butter melts, use the tip of a fork to spread it out over the surface. The melted butter will form a protective surface until you use the sauce; when are you ready for the sauce, just whisk the surface butter in.

To make in a microwave, make your roux in there first in a large measuring jug. Then whisk in the milk all at once. Zap a few times for a minute each time, whisking after each zap. Doing a white sauce in a microwave helps avoid any dreaded scorching at the bottom.

Jacques Pépin recommends making a white sauce like this: take the (unmelted) butter and the flour, and massage them together until blended (you have just made a beurre manié.) Heat the milk, then add the beurre manié all at once. Let simmer for 4 to 5 minutes, whisking frequently.

The nutritional levels depend on what kind of milk you use and whether you are making a thin, medium or thick sauce.

Béchamel Sauce was reputedly named by the chef François Pierre de La Varenne (1615 – 1678) in honour of Louis de Béchameil (1630-1703), chief steward for Louis XIV of France. Béchameil became the Intendant of Tours in 1680, and the marquis de Nointel in 1685, on the death of Charles-Henri-François-Olivier. He also was superintendent of the house for the Duke of Orleans, a food lover and an art lover, and a wealthy tax collector for the Crown. Giving backing to the idea that it is named after him is a quote attributed to the Duke of Escars: “That fellow Béchameil has all the luck! I was serving breast of chicken à la crème more than 20 years before he was born, but I have never had the chance of giving my name to even the most modest sauce.” (“Est-il heureux, ce petit Béchameil ! J’avais fait servir des émincés de blancs de volaille à la crème plus de vingt ans avant qu’il fût au monde et, voyez, pourtant je n’ai jamais eu le bonheur de pouvoir donner mon nom à la plus petite sauce.”)

La Varenne certainly included the sauce in his book Le Cuisinier Francais (1651.) It was called Béchameil at first, then became Béchamelle, then béchamelle (lower-case by the end of the 1700s), then béchamel. Sometimes you will still see it referred to as “béchamelle”.

As well, there is the usual claim of its having been brought to France by Marie de Medici.

The original béchamel sauce isn’t the béchamel we make today. Originally, it was made from a thick velouté that had a good deal of cream added to it. That’s how Carême made it, finishing it with more cream and egg yolk. Escoffier simplified it close to the milk-based white sauce we know, but included veal that was strained out.