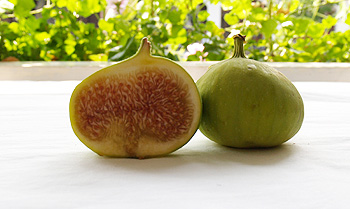 Figs are a soft fruit with edible skin and many small edible seeds inside. In the West, we have mostly known and used them as a dried fruit.

Figs need to ripen on the tree and be ripe when harvested. Figs that are going to be dried are allowed to stay on the tree longer, so that more sugar can develop.

Fresh figs bruise easily, so they need to be handled gently. Choose fresh figs that are plump, somewhat firm and brightly coloured.

Figs are related to mulberries.

Figs contain a protease enzyme that breaks down proteins, which gelatin contains, so if you are planning to use fresh figs in a jellied recipe, the fruit must be boiled first to destroy the enzyme or your jellied salad will end up jellied mush.

To use fresh ones, trim off the stem end, wash and eat out of hand. They can also be poached.

Figs are valued for their sugar content, which is up to 55%.

Store fresh refrigerated for up to 2 to 3 days. Store dried figs in a sealed container up to a year. 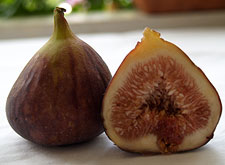 They were a very important fruit in the ancient world. For most of history, people in the Middle East used figs as a sweetener, because honey was very expensive and sugar was unknown.

The Egyptians, who began growing figs as early as 4000 BC, considered Phoenician figs a delicacy, though they weren’t quite as fond of them as the Greeks and Romans would be later.

The Greeks and Phoenicians spread them around the Mediterranean, with the Greeks bringing them to Italy. In Rome and Greece, they were a part of ordinary people’s diets.

Figs were brought to California by the Spanish in 1769.