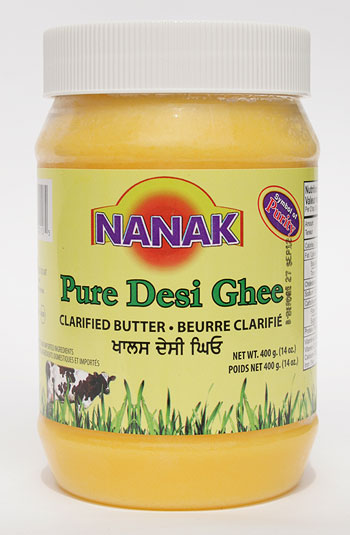 Contents hide
Ghee is butter that has been clarified, then browned a bit, then strained of the browned milk solids at the bottom, resulting in pure butter fat with a high smoke point. The browning of the milk solids gives the Ghee a nutty, caramelized flavour and taste.

Traditionally, people in India would collect the cream off the top of buffalo milk and the cream from the top of boiled cow’s milk (all milk in India is boiled before using.) This skimmed-off cream is called “malai.” The malai is stored up until there’s enough to do anything with. Some yoghurt is added, which provides friendly bacteria to store it safely, and help it develop a slightly sour taste. When there is several days worth of collected cream they churn it for butter, then heat it to make ghee from. The butter includes lots of milk solids, included the solidified cream skin that was skimmed off the boiled milk. This provides lots of bits to carmelize on the bottom while making the ghee, more than would be present commercially, giving it a very pronounced nutty taste, like the French Beurre Noisette. But even though this homemade taste was better, most Indians don’t bother anymore, they just buy it already made in cans imported from Australia, which is made from cow’s milk.

This is real Ghee — Ghee made from butter, as described below under cooking tips.

A Ghee made not from butter, but from hydrogenated vegetable oils. It is cheap, convenient, and popular in India. You buy it at stores, but with what we know about hydrogenated fats now, not as good for you as the real thing. Indians say, though, that the taste is very close to the “Usli Ghee.”

To make Ghee: melt butter then simmer over very low heat for about 10 minutes. After 10 minutes, there should be a thin crust on the top. Skim that off. Stir, and cook until the milk solids brown at the bottom of the melted butter — this may take another 10 minutes. Pour off the melted butter (strain through muslin or paper towel, if you wish) into a jar or dish, being careful to leave the browned bits behind. Discard them.

Many people suggest that unsalted butter should be used.

Ghee stores better than butter, because the water and dairy solids are removed. Though in India many people store Ghee at room temperature, it will keep better refrigerated in a sealed jar for up to 2 to 3 months.

This web site generates income from affiliated links and ads at no cost to you to fund continued research · Information on this site is Copyright © 2022· Feel free to cite correctly, but copying whole pages for your website is content theft and will be DCMA'd.
Tagged With: Fat, Indian Food