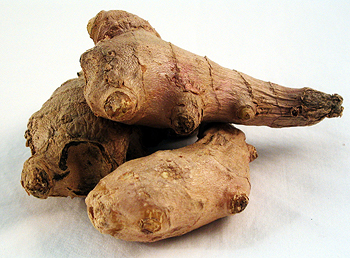 Ginger is the root (actually the rhizome) of a plant that grows in tropical countries. The plant is a perennial related to Turmeric. There are different varieties of ginger: some are very mild, some are very hot.

Above ground, the plant grows a green stalk up to 3 feet tall (1 metre.) The plant has narrow, long leaves up to 1 foot long (30 cm), and blooms with white or yellow flowers.

A whole root of ginger, with several pieces attached together is called “the hand.” The little pieces that make it up are called “the fingers.”

Ginger root harvested in mid-spring will be tender. The next best harvest is in July. Ginger harvested in early fall tends to be more woody.

The root can be used fresh, sliced, chopped or grated, or it can be dried and ground. Whether dried or fresh, the root will have a sweet but hot flavour. When fresh, however, the root will have citrus notes as well that are missing in the dried. In Western cooking, ginger is mostly used dried and ground. Pickled ginger is used a lot in Japanese cooking.

When buying fresh ginger, choose pieces with tight skin and no wrinkles.

Very young Ginger roots don’t need peeling because the skin will be so tender. The roots that reach Western supermarkets, however, tend to be mature ones with tough skin, and do need peeling. If you are just using a piece of Ginger to flavour heated oil, but then are going to discard it, you don’t need to peel first.

You can peel with a paring knife or a vegetable peeler. Remove just the skin. Don’t go any deeper than that, because a lot of the flavour is just below the skin. Peel only as much as you plan to use at that time, because the skin helps to keep the rest fresh. Some people suggest peeling ginger instead with a teaspoon from the drawer that has a sharpish edge: you just scrape the skin off, minimizing waste.

Some sources suggest cutting or grating Ginger across the grain to minimize the stringiness. This tip may be better reserved for those who have the time to stand at a window with a magnifying glass trying to determine which way the grain is going in the first place.

Some sources suggest soaking Ginger in cold water for about ten minutes, then squeezing it dry, to reduce its bite. You could also just use less Ginger when you don’t want to pronounced a flavour.

For fresh Ginger, galangal (not that that’s likely going to be any easier to get). For powdered Ginger, another dried spice such as nutmeg or mace.

To store fresh, wrap unpeeled in plastic wrap and refrigerate up to a month.

You can also store it in a sealed jar, peeled, sliced and covered with sherry, in the refrigerator for up to a year.

It was very popular again towards the end of the Middle Ages, with those who could afford it, and for use in flavouring beer.

The Spanish brought it to the Caribbean in the 1500’s.

In the 1800s, preserved or crystallized Ginger began to appear. Up until then, Ginger had just been available dried or powdered.

“I have a gammon of bacon and two razors of ginger, to be delivered as far as Charing-cross.” — Second Carrier. Henry IV, part . Act II, Scene 1. Shakespeare.

In Indian cooking, “Inji” refers to the root; “sukku” refers to Ginger that has been dried or ground.