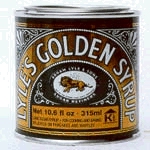 Golden Syrup is made by boiling down sugar cane juice, after the sugar that is going to crystallize has been removed, until it is a thick, amber syrup. Some flavouring and colouring may be added.

Ounce for ounce, It is not as sweet as sugar because it contains some water. Technically, Golden Syrup is a mixture of invert sugar, sucrose, water, and salts.

“GOLDEN SYRUP is a viscous, golden-red liquid of characteristic flavour and aroma. It is produced by decolourisation of a partially hydrolysed sugar syrup. Manufacturers Golden Syrup is a similar product to Golden Syrup but it is produced at a lower solids concentration and is therefore less viscous which allows it to flow more readily than Golden Syrup. These two syrups are widely used in baking and fillings where their flavour and high sweetening power (relative to sucrose) are especially advantageous.” [1]Liquid Sugars. Sugar Australia. Accessed August 2020 at https://www.sugaraustralia.com.au/sugar-australia/products/industrial-products/liquid-sugars/

“Lyle’s Golden Syrup” is the best known brand in the UK. It is actually made by Tate & Lyle. It retains the pre-1921 merger name of just “Lyle.”

In New Zealand, a brand called “Chelsea” is also popular.

“Flavour syrups, particularly golden syrup and treacle are quite stable and have a useful life in excess of 2 years and thus do not require a ‘use by date’. There may be some darkening of golden syrup over time.”  [2]Liquid Sugars. Sugar Australia. Op. Cit.

“First” molasses or corn syrup. Or, if you want to be more exact, because Golden Syrup is sweeter than corn syrup, use ½ corn syrup, ½ honey.

Golden Syrup was invented in England in 1883 by Abram Lyle, whose name is now on “Lyle’s Golden Syrup.”

“Lyle’s policy at his Plaistow Wharf refinery was to produce a few types of sugar as cheaply as possible. He specialized in Golden Syrup, a low-price sugar product designed to resemble honey (packaging that highlighted a bee motif enhanced the identification). It was said that the poor of the industrialized cities of England lived on bread and cheap sugar products such as Golden Syrup and treacle.” [3]Tate & Lyle PLC. Accessed August 2020 at https://www.referenceforbusiness.com/history2/39/Tate-Lyle-PLC.html

This web site generates income from affiliated links and ads at no cost to you to fund continued research · Information on this site is Copyright © 2022· Feel free to cite correctly, but copying whole pages for your website is content theft and will be DCMA'd.
Tagged With: Syrups