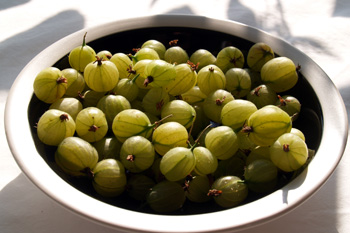 Most Gooseberries are, like rhubarb and cranberries, too tart to eat raw: they need to be cooked with sugar.

There are native species of Gooseberries in Asia, Europe and North America. The berries vary in size from that of a black currant to the size of a large cherry. The skin can be smooth, rough or prickly, and in colour can be white, green or purple. They are usually propagated by cuttings.

Though popular with the colonists, Gooseberries have faded in popularity in America, though they remain very popular in the UK. In England you can start picking them about Whitsuntide, and they are available throughout June and July.

Smaller Gooseberries hold their flavour better when cooked than do the larger ones. Purply ones are less tart. Early picked ones will be small, sour and green and good for cooking. Ones harvested later can be eaten fresh, but as they are very soft, they don’t travel well, so you don’t see them in markets or at stores much. There is one variety called “Leveller” which is sweet enough to eat raw.

Gooseberries from New Zealand are quite large.

Wash, and remove stems. To “top and tail” gooseberries, use a pair of kitchen scissors. It goes much faster than with a knife.

Store for up to two weeks in refrigerator.

The French word for currant, “groseille”, is one possible source of our English word “gooseberry”. One of the older German names, Jansbeere, was probably derived from its ripening in Germany around the time of the feast of St John (beginning of July).

This web site generates income from affiliated links and ads at no cost to you to fund continued research · Information on this site is Copyright © 2022· Feel free to cite correctly, but copying whole pages for your website is content theft and will be DCMA'd.
Tagged With: British Food, German Food