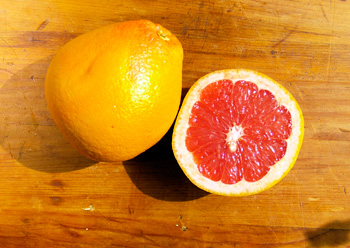 There are many different varieties of grapefruit, but all are divided into white or pink categories.

Inside, there will be 11 to 14 fruit segments inside, with an average of 12. The fruit has a taste that is both sweet and sour. The membranes inside are quite bitter and not eaten.

Grapefruit won’t ripen any further after picking. They are usually waxed before shipping

Grapefruit naturally has a compound called “naringin” in it. It’s naringin that gives a Grapefruit some of its bitter taste.

To make a grapefruit juicier, roll it on the counter pressing down before cutting open.

Will keep in fridge for several weeks or up to 6 days at room temperature.

Grapefruit was first noted in 1750 in Barbados by a Griffith Hughes; then in 1789 in Jamaica by a Patrick Browne. It was mentioned again in Jamaica in 1814 by John Lunan in his book Hortus Jamaicensis, a copy of which is now in the Thomas Fischer Rare Book Library in Toronto, Canada.

Grapefruit probably arrived in Florida by 1823, brought to Safety Harbour near Tampa, Florida by Odet Phillipe, who claimed to be a Count and the personal surgeon and good friend of Napoleon. Odet settled there at Safety Harbour (William C. Cooper, In Search of the Golden Apple).

In 1837 James MacFayden in “Flora of Jamaica”, gave it a separate Latin botanical name (despite the name of the book, the grapefruit appears to have originated in the Barbados). Up to then, people had thought it was just a pummelo variety. He thought it might have been a spontaneous sport (mutation) from the pummelo, but by 1948 studies had made it clear that it was a cross between the pummelo and an orange.

The tree was grown as a novelty in Florida until the mid-1870s, when they took note of the fact that New York had imported 78,000 grapefruits from the Caribbean in 1874, all of which had sailed right on past them. By 1880, Florida growers were sending the first small shipments north.

After World War I, it gained popularity as a breakfast fruit.

The pink grapefruit emerged in Florida in 1913 as a sport; the Ruby grapefruit was also developed from a sport found in Texas in 1929.

Tinned grapefruit disappeared from the shops in Britain during World War II, not reappearing until 1952. [1]

In the 1970s, a weight-loss diet based on eating grapefruit was very popular.

Grapefruit was named “grapefruit” only because it grows in clusters like grapes (as does, by the way, so much other fruit). At the time that the name grapefruit was starting to be used, people thought it would be too confusing, as the fruit had nothing to do with grapes.

They tried to change the name to “pomelo”, but instead people just confused that with “pummelo” and “pomelo” became another name for “pummelo”. In 1962, the Florida Citrus growers tried changing the name again, but they didn’t succeed.