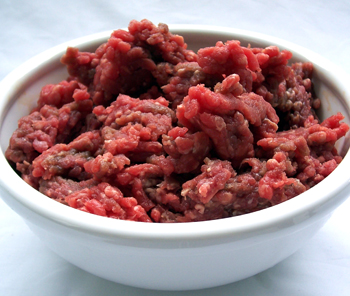 Many people in North America use the terms ground beef / Ground Hamburger / Hamburger interchangeably. For producers, in the US at least, there is a legal difference they must adhere to: any fat in ground beef must be the fat already adhering to the meat content they are adding; for ground hamburger, additional beef fat other than what was on those pieces of meat can be added.

When beef is ground, far more surface area is created on all the minute pieces of meat than existed on a single hunk of meat. Combine this increased surface area with the extra handling and equipment that the ground beef has had to go through, and the ground beef gets lots more chances to pick up bacteria during processing. The cow may have already had E. coli in its intestines, but the processing increases the chances of bacteria coming in contact with the meat.

Consequently, ground beef must have no pink inside when cooked. Colour alone, though, isn’t an indication of safety: sometimes hamburger can appear browned before it is safe to eat. It must reach an internal temperature of 71 C (160 F). If you’re nervous about this, instant-read meat thermometers are very inexpensive now.

But what does regular, lean and extra-lean mean? The labelling laws can be unclear.

Canada’s ground beef laws are more updated than those of the UK and the US:

In any other kind of food labelled 10g fat per 100g serving, the math would indicate that the fat content was 10%. But the 10% in that extra lean above isn’t actually 10% — it’s higher.

On the surface, that 10% number is reasonably accurate. It’s the percent of fat, by weight, that the processor of the ground beef has either added to the ground beef or left in that was already part of the meat. In addition, ground beef naturally has a lot of water in it. That’s not the producer adding water, we’re all made of water. Ground beef is 55% water. When ground beef is cooked, the half the weight that was water evaporates away in steam. The fat content didn’t go anywhere, though, so with the overall weight of the cooked product having gone down, your ratio of fat to product has now doubled to 20% if you pan fried your hamburger (a bit less if you barbequed or broiled it, allowing fat to drip off.) A pan-fried hamburger patty from 10% fat ground beef will still end up deriving 47% of its calories from fat.

You can’t assemble one tidy table comparing the fat content of ground beef in the UK, the US and Canada.

In 2004, the British Food Standards Agency (FSA) found that many packs of “extra lean” minced beef sometimes contained more fat than regular ground beef. While there is no maximum fat content for minced beef in the UK, there is a maximum of 7% if the minced beef packaging bears the words “lean minced meat.” If, however, the seller changes the wording to “minced meat lean”, or labels it extra lean, etc. then the 7% maximum doesn’t apply, though the consumer is still under the impression that s/he is getting a lower-fat product. The FSA found this not to be true, and consequently in 2004 decided to start work on clearer labelling guidelines for minced beef in the UK.

Sometimes, in North America, ground beef will be labelled to indicate that it has been made purely from one specific part of the animal. Here is the fat content on those varieties:

Chuck is considered the optimum “cut” of meat meat for ground beef. The reason is that ground sirloin and Ground Round can end up tough and dry. When hamburger is really lean, what fat there is in it will have finished dripping out too soon, leaving the meat to shrivel and dry over the heat. As a result, people are going to cook it less well-done the next time, bringing back the basic health safety issues of undercooked ground beef. Instead, if you are using a ground beef made from something like ground chuck, or with a high enough fat content, it has enough fat in it to keep lubricating the ground beef for the entire cooking process, so that people won’t complain about their ground beef being over-cooked. If you are pan-frying ground sirloin or ground round, you may wisth to have some olive oil, or olive oil spray, (or canola / rapeseed oil) at hand to help prevent the meat from sticking.

You may have noticed that all three sources (Chuck, Round, Sirloin) are pretty tough areas of the cow: why the hamburger still ends up tender is that the grinding process breaks down the tissue of the meat, effectively tenderizing it.

What colour should my ground beef be?

Beef is normally more of a purple colour. It only turns rosy red when it comes into contact with oxygen. The rosy red colour, however, is the colour that consumers have come to associate with “safe to eat.” Consequently, retailers oblige consumers by packaging the fresh ground beef (and all other fresh beef) in plastic wrap which is actually specially selected to let air through to the meat, to keep the surface of the meat that rosy red colour. That’s why home economists have been saying to us all along, don’t freeze your meat in that home packaging: instant freezer burn. Should you happen to see ground beef on which the dates are good, but the meat is a bit more purply, that simply means it’s been packaged with proper plastic wrap, and because of that will probably actually be fresher than the rosy red stuff. When you expose purply colour beef to the air, it should turn red in about 15 minutes.

Making your own ground beef

Some people use their food processor to grind their own ground beef. To do this, cut the meat first into 2 to 3 cm (1 inch) hunks, then put it in the fridge to cool it down again. Then process in small batches in the food processor. Use “pulse” rather than continuous run; continuous run will give you beef liquid. If you want 100% lean ground beef, you can make it at home yourself this way. People who’ve tried, however, seem to reluctantly admit that you should add back that fat you had just trimmed off: the optimum figure seems to be at least 10% fat, something the food industry seems to have currently settled on as well, given that the leanest ground beef is still 10% fat. Cover and refrigerate right away until you need the ground beef, or freeze. Make sure you wash any items that you used in making the hamburger before you use them for anything else, including the cutting board and the counter.

Ground beef must be cooked to an internal temperature of 71 C (160 F). This is past the pink stage inside, but you can’t guess that it’s necessarily at that temperature just because it’s no longer pink — sometimes hamburger may be completely browned before it reaches a temperature at which it is safe to eat. A quick poke of an instant read food thermometer will ensure safety.

Some people suggest that to reduce the fat content of ground beef, cook the meat, then rinse with hot water in a colander. Others argue that this coincidentally rinses all flavour away at the same time. Instead, you could just turn the cooked ground beef out onto paper towel, pat the excess fat off, and then proceed with your recipe.

Don’t cook any ground beef at too high a temperature, as that results in too much fat running off, leaving you with dry, flavourless and toughened meat.

When you’re pan-frying something such as patties or meatballs made from extra lean ground beef, chances are the meat may stick to the pan. Spray the pan lightly first with a cooking spray.

When substituting ground turkey or ground chicken for Ground Beef (amount for equal amount), you may wish to consider compensating for the weaker taste by increasing by a tidge whatever flavourings you are using. You may also want to hold back a smidge on any liquid, until you see how the meat is taking it up.

Store fresh Ground Beef in refrigerator for up to two days. At that point, use or freeze it.

To freeze, remove from store packaging (which is designed to let air in, keeping the ground beef the rosy colour consumers expect). Package in portions that you can reasonably expect to use at one time. Freeze. When freezing patties, separate with plastic wrap (waxed paper and parchment paper can stick.)

It’s not clear how far back in time ground, or minced, beef goes. Beef Tartare, the recipe, has been around since at least the Middle Ages. Placing a raw egg on top the mound of raw chopped beef is a modern innovation.

The original “hamburger” was a piece of meat pounded until it was tender, so even though it probably looked the same as a patty pressed together from chopped meat, it wasn’t actually chopped. It was a “hamburg steak” (reputedly named for Hamburg, Germany, though the actual evidence is feeble.) Cube Steak is probably our closest equivalent today.

Some say the hamburg steak first showed up on a menu at Delmonico’s restaurant in New York City in 1834, but there is no actual backing for this claim. What North Americans know as “hamburger” is minced beef, and mincing and grinding machines weren’t invented until the 1870s in Britain. The meat would have had to be minced by hand, which is possible granted with enough kitchen staff.

The earliest documented occurrence of the phrase “hamburg steak” in print is 50 years later, in the Boston Evening Journal in 1884. One year later, in 1885, it showed up as part of a sandwich, being placed between buns both at the Erie County Fair in New York State and at the Outgamie County Fair in Seymor, Wisconsin. At this point in time, though, it was still a pounded piece of meat.

By 1904, patties made of ground beef had replaced the pounded pieces of meat as the “hamburger” in a “hamburger”. This was at the World’s Fair in St Louis. By 1912, the idea of a hamburger patty on a bun had caught on to the point that they could just be called “burgers”. The first dedicated hamburger stand in the world was opened in 1921 in Wichita, Kansas by what became known as The White Castle hamburger chain. The White Castle chain was also the first one to sell hamburgers in the UK, though hamburgers didn’t take off in the UK until after the end of WWII.

This web site generates income from affiliated links and ads at no cost to you to fund continued research · Information on this site is Copyright © 2022· Feel free to cite correctly, but copying whole pages for your website is content theft and will be DCMA'd.
Tagged With: Ground Beef