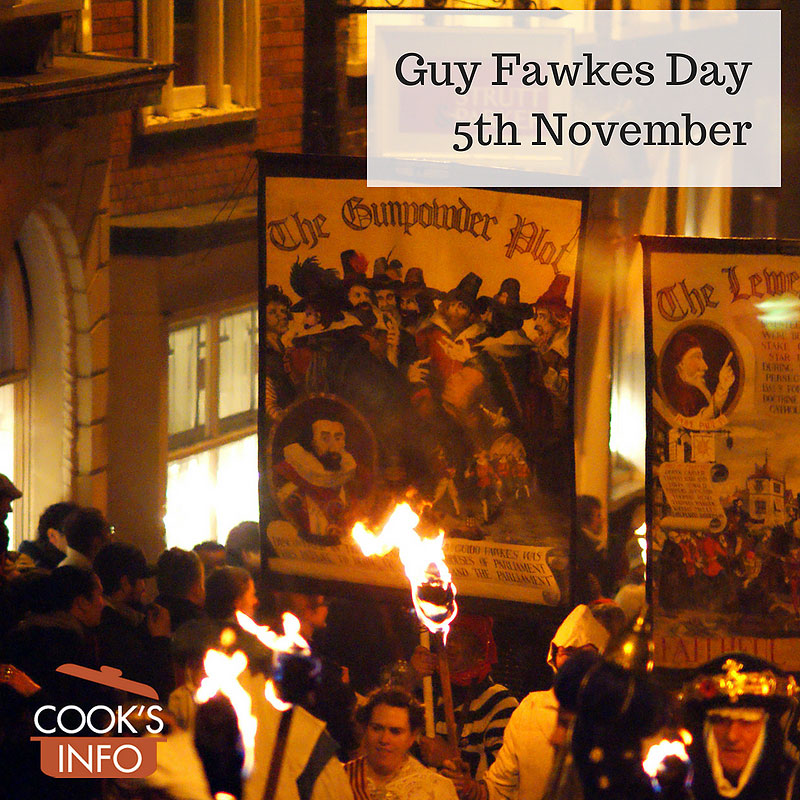 The 5th of November is Guy Fawkes Day. At night, there are torchlit processions, bonfires, fireworks, and foods that can easily be cooked and served outdoors, such as baked potatoes.

The story of Guy Fawkes

In 1605, Catholics in England were angry.

Under Queen Elizabeth I, harsh laws had been passed against Catholics in England. Catholics backed James VI of Scotland as her successor, noting that he was more sympathetic to Catholic causes.

In 1603, Elizabeth died and James came to the throne of England (and Ireland) as King James the First. Not only did he not change the laws, but he ordered all Catholic priests out of the country (note that for James that was a compromise: many were pressuring him to have the priests put to death.) A large group of Catholic plotters felt that if they could knock off the King (and along with him, Parliament, which had had no small hand in pressuring him), then they could appoint the King’s daughter to the throne and see that she was raised as a Catholic.

A group of these plotters learnt that a house next to Parliament had cellars that went under Parliament. A plan was hatched to blow up Parliament and the King on the day Parliament was set to open that year, the 5th of November 1605, by placing barrels of gunpowder in that part of the cellar.

The leader was a man named Robert Gatesby. Guy Fawkes was just one of the men, the one who was given the task of staying behind and lighting the explosion. (He mustn’t have been all that bright.) 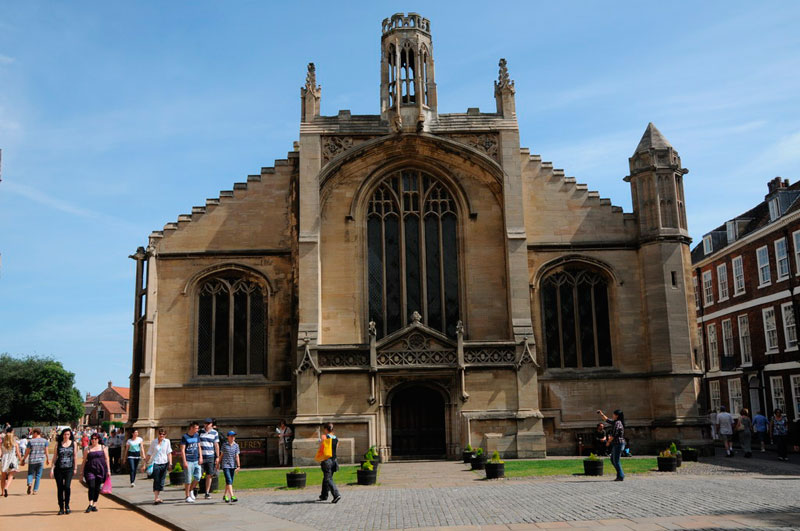 There were many people involved in the plot, and inevitably, someone snitched. Fawkes was discovered before he could set off the explosion. He was captured and tortured until he revealed all the names, but then hanged all the same on 31 January 1606 outside the old Palace of Westminster. Many of the conspirators were executed in the Tower of London. This had actually been the third Catholic plot against James in three years. 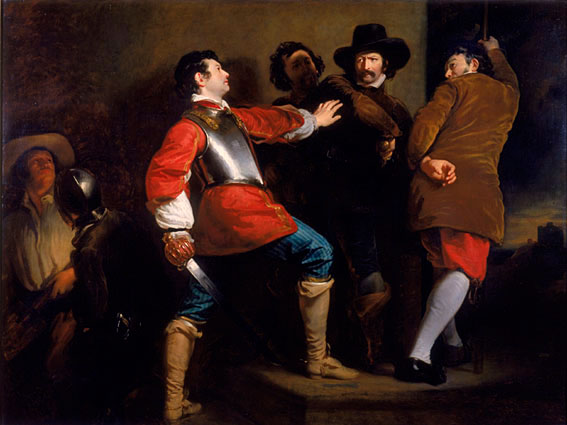 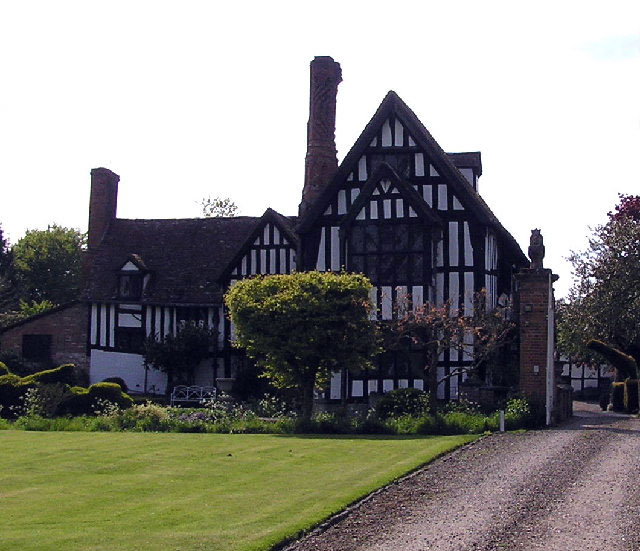 Huddington Court, Worcestershire. Guy Fawkes and fellow conspirators spent their last night of freedom here, while fleeing. They would be caught the next day, having gotten only a few miles further. Richard Dunn / http://www.geograph.org.uk/photo/9068 / 2005 / CC BY-SA 2.0 CC BY-SA 2.0

A celebration was proclaimed by Parliament, which continues to take place today on the 5th of November. There are bonfires and fireworks, and an effigy of Guy Fawkes is usually burned in the bonfire. Children used to go around before Guy Fawkes day asking for wood to help build the bonfire with and for small change to help buy fireworks. They would often drag along the effigy they had made. The expression they used was “a penny for the Guy.” Some children also blacken their faces on this night at the bonfire celebrations. 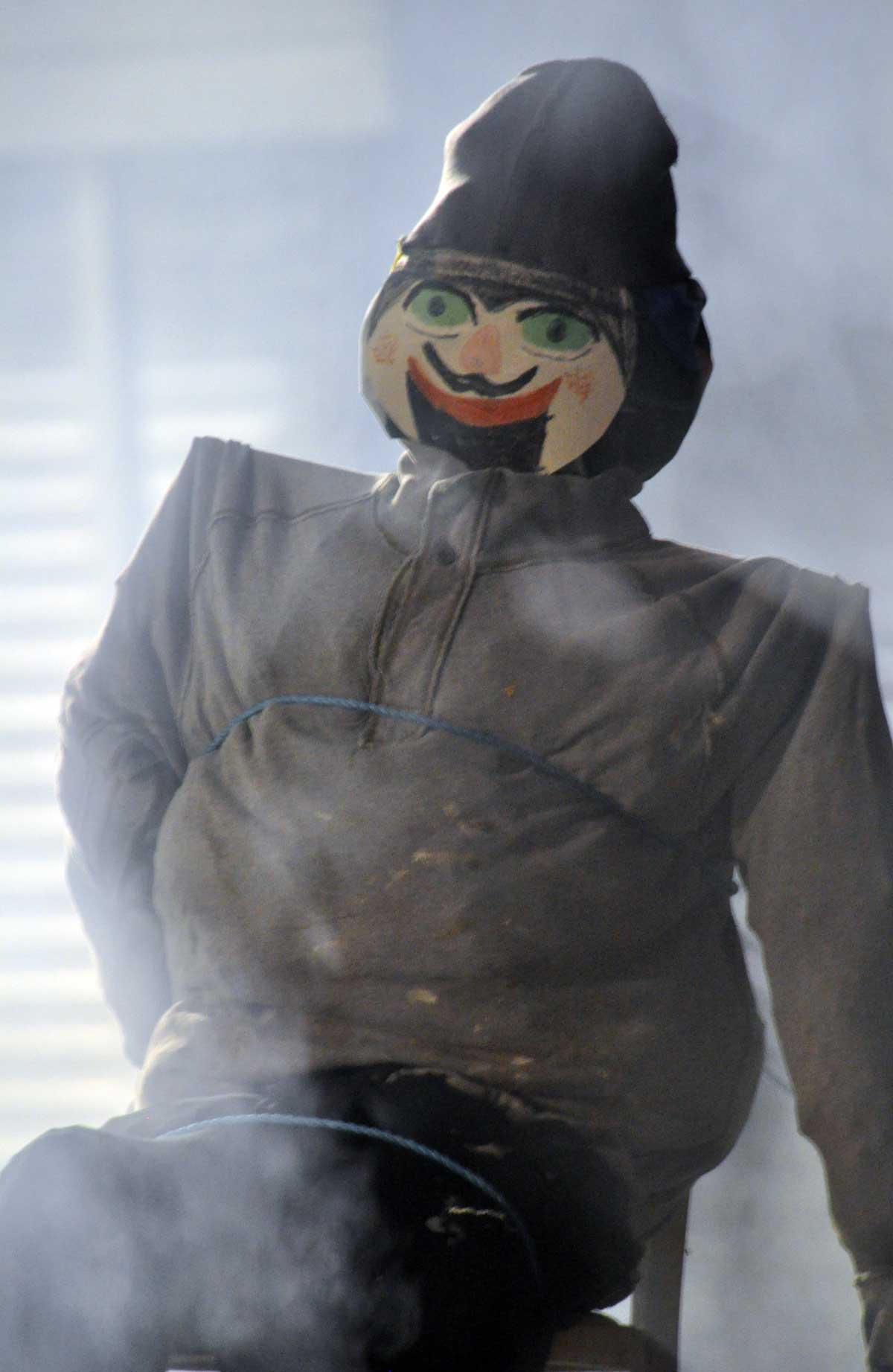 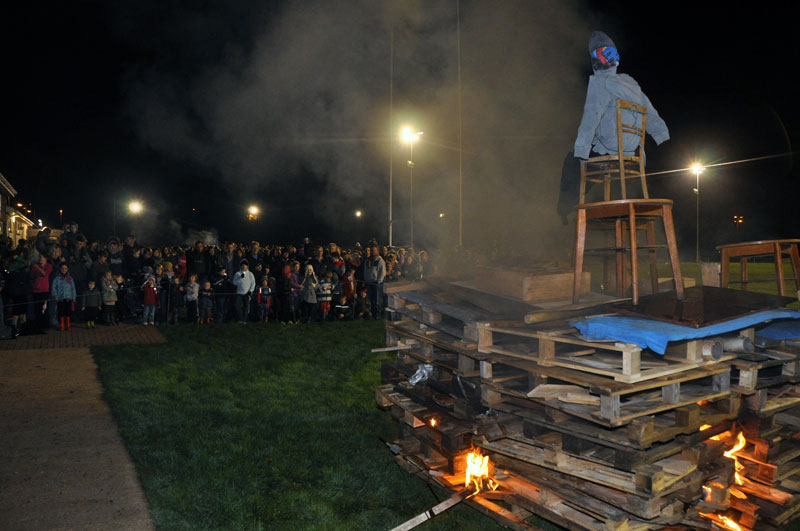 Guy Fawkes Day observance was included in the Book of Common Prayer until 1859. [1]Until the year 1859 modern editions of the Book of Common Prayer contained four services for special days of the year, which were commonly called “State Services,” because they commemorated certain public events connected with the political history of the country; and because the use of them was enjoined by the State alone rather than by the Church and State together… The Form of Prayer for the Fifth of November. The Act of Parliament 3 Jac. I., cap. 1, provided for the annual observance of this day in commemoration of the discovery of the Powder Plot, and ordered that all ministers in every Cathedral and Parish Church should say Morning Prayer, and “give thanks to Almighty God for this most happy deliverance,” and that all “persons inhabiting within this realm of England and dominions of the same” should resort to some Church and be present during such service. — Blunt, John Henry, Ed. The Annotated Book of Common Prayer. London: E.P. Dutton & Co. 1884. General Appendix, I. The State Services: The Form of Prayer for the Fifth of November. Page 578.

Guy Fawkes went to school at St Peters in York. To this day, the school does not celebrate Bonfire Night.

The bonfire is also put to a more practical use. Jacket potatoes (aka baked potatoes) are wrapped in tin foil and cooked in the fire, as well as baked bananas (slit the banana skin, stuff chocolate inside, close the skin back up, wrap in tin foil, and place in fire for about 10 minutes until gooey.) Pots of soup can also be heated in the bonfire for the crowd. It’s also traditional to serve parkin cake at the gathering.

If you are thinking of making a pot of soup to heat up next to the fire, consider making a creamed soup that can be served in cups and sipped out of them, as it’s tricky even trying to eat a baked potato with a fork while standing up amongst a crowd. Other easy foods to eat might be toasted marshmallows, roasted wieners, or sausages in a bun (even though that might be dangerously close to turning Bonfire Night into a 4th of July wienie roast).

Shops in Bury St Edmunds, Suffolk, sell cooked pigeon peas in cups with a splash of vinegar on them in the lead-up to Guy Fawkes Day. 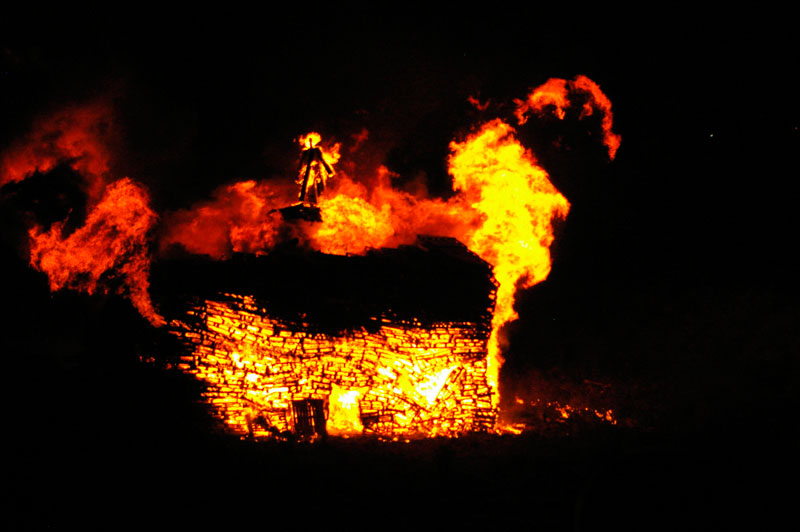 The night was also celebrated for nearly a hundred years in Nanaimo, British Columbia, Canada. The custom was brought over by English coal miners that came to Nanaimo in the mid 1800s. They built very tall bonfires — often 40 feet (12 metres) or taller, sometimes from “spare” railroad ties that they’d come across. Over the years in Nanaimo, by the 1960s the effigy of Guy Fawkes had disappeared, and so had the name — it’s just called “Bonfire Night” by the local children. By the early 2000s, the public tradition has largely been lost altogether, and the few remaining celebrations that are held are mostly in private backyards. 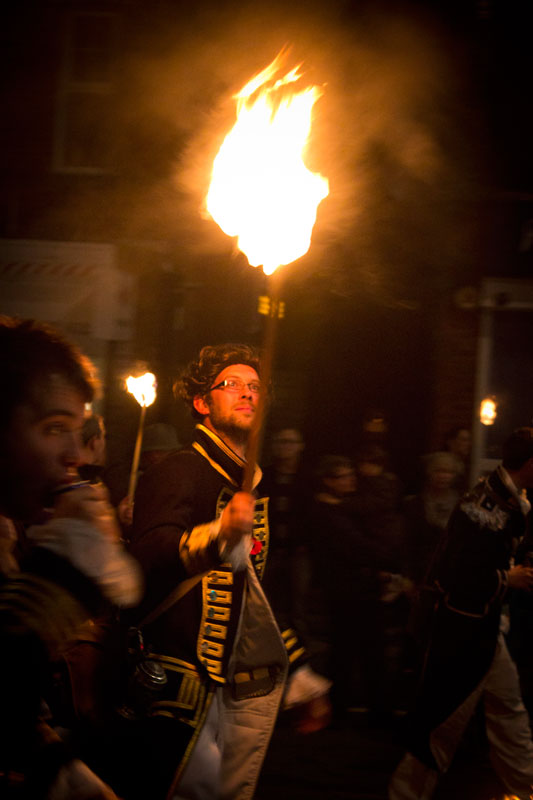 Guy, guy, guy
Poke him in the eye,
Put him on the bonfire,
And there let him die.

Remember, remember the fifth of November
Gunpowder, treason and plot.
I see no reason, why gunpowder treason
Should ever be forgot.

Remember, remember, the fifth of November,
Gunpowder, treason and plot!
A stick or a stake for King James’ sake
Will you please to give us a faggot
If you can’t give us one, we’ll take two;
The better for us and the worse for you! 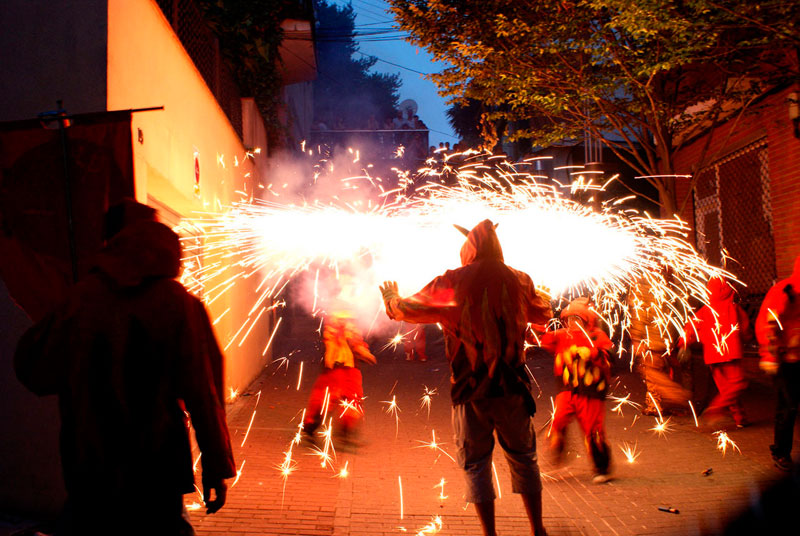