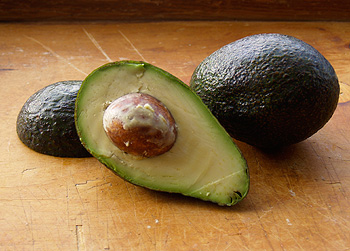 The Hass Avocado has rough, medium-thick skin that turns from green to purplish black as the avocado matures. The darker the skin, the riper this avocado is. The skin peels off easily. The tough skin helps protect the fruit during shipping, and the darkness helps to mask any blemishes.

Inside, the avocado has a medium-sized stone, and pale green flesh that is very low in fibre.

Owing to the range of geographical places it is grown in — places such as California, Mexico, Chile, Peru, the Dominican Republic and New Zealand — it is available year-round to consumers. 95% of the avocados grown in California are Hass Avocados (as of 2012.)

Owing to its rough, reptilian looking skin, the Hass Avocado might not look as appealing as a smooth-skinned avocado, but its flesh is far creamier.

The tree will start to bear fruit after about 1 ½ years of age, and produce for about 30 years in total. The tree is more open than tall in nature, growing to about 25 by 20 feet (7.6 by 6 metres), and can withstand temperatures down to 26 F (-3 C.) The fruit clings well to the tree during high winds.

The Hass Avocado is the current (2012) favourite avocado in the UK and in North America, perhaps partly because it is available year round, but probably also owing to the ease of peeling and its creaminess. 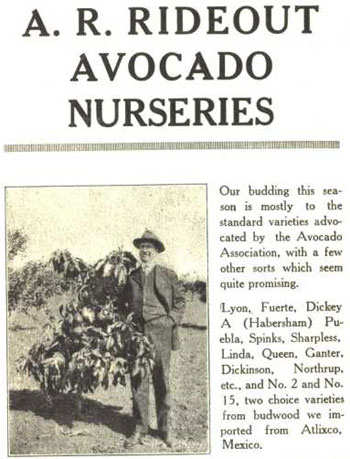 Hass Avocado is a hybrid descendant from the Guatemalan type of Avocado.

A.R. Rideout of Whittier, California, was an avocado enthusiast and proprietor of A.R. Rideout Avocado Nurseries. He’d often take a chance on a random avocado seed he found, and plant it to see what would come of it. He would even collect avocado pits out of restaurant garbage bins.

In 1925, a postman named Rudolph Hass purchased a 1 ½ acre piece of land at 430 West Road in La Habra Heights, California. Hass, who was barely getting by on his 25 cents an hour postman job, had read a magazine article that said growing avocados was going to be a profitable undertaking, and so decided to try to get into the business. On the grove that he purchased were already growing a few Puebla variety avocados, a few Nabals, a few Lyons, and some Fuertes.

In 1926, he hired a professional grafter named Caulkins to switch the Puebla, Nabals and Lyons to Fuertes by grafting. At the same time, Caulkins advised him to buy some Guatemalan type avocado seed from A.R. Rideout nurseries. Caulkins’ idea was to grow some seedlings, then graft them to be Fuertes, too.

Hass went to Rideout nurseries to purchase seed. Returning to his land with the purchased seeds, he followed Rideout’s instructions that, wherever he eventually wanted an avocado tree, to plant three seeds together. The strongest seedling that emerged would be used to graft a variety such as Fuerte onto; the two weakest would just be pulled up and discarded. So Hass planted his grove out, planting three seeds together in a hole, with the holes 12 feet apart. One of these seeds that Hass planted in 1926 would become the Hass avocado tree.

When the time came for selection and grafting, Hass hired a professional grafter Caulkins to do the grafting. Caulkins weeded out the two weakest seedlings from each of the holes, and grafted cuttings from the existing Fuerte trees onto the seedings that had been deemed the strongest. The following year, Hass and Caulkins found that the grafting hadn’t succeeded on three of the trees, so they regrafted those three trees. The year after that, there was only one tree left that was still rejecting being grafted.

This was 1931 now, and Hass was ready to cut the tree down, as he was after something to graft Fuerte onto, but Caulkins advised that as it was a good, strong tree, they might as well let it grow of its own accord and see what came of it. The tree was producing fruit, and a lot of it. When the fruit grew large and matured, Hass picked them, let them ripen, then the family and friends tasted them, pronouncing them excellent and perhaps better than the Fuerte that Hass had been aiming for. [1]

Hass found that this “problem” tree seedling grew faster, and grew more upright than Fuertes — the latter meaning that more trees could be planted per acre. He also found that it was a more reliable and very abundant bearer. Overtime, as the tree grew and produced more and more of this new avocado than the family needed, he started selling them 4 or 5 to a bag for $1.00 to fellow workers at the post office. He was able to sell at work all that he could bring in, so he grafted out more of the trees, and set up a roadside stand by the orchard, enlisting wife and five children to help harvest and do sales at the stand. He also sold them to the “Model Grocery Store” on Colorado Street in Pasadena, California. Customers of this store were affluent, and paid $1.00 US for these new avocados (equivalent to $15.00 US in 2007.) 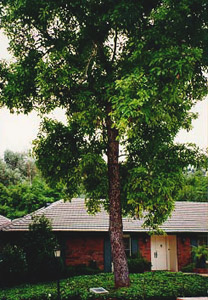 In 1935, Hass applied for and received a 17-year plant patent for Hass Avocados, naming the tree after himself. In the same year, he arranged with a local nurseryman, named Harold H. Brokaw, to grow and sell the trees, with a split of 25% for Hass and 75% for Brokaw. Sales started in 1936, with 300 trees that Brokaw propagated. The selling price was $5.00 a tree.

The tree was very popular with buyers, but Hass only made $4,800 [2] US in total directly from tree sales because other avocado growers would buy one tree, then use cuttings from that one tree to re-graft their whole existing avocado groves.

The tree was introduced into Israel in the late 1940s.

In 1952, the patent expired, and Hass died shortly afterward.

Over the decades, Hass’s original small grove became a housing suburb, but the original tree survived until 2002 when it succombed to root rot (phytophthora) despite efforts by Harold Brokaw’s nephew, Hank Brokaw, to save it, and was cut down on 11 September 2002, aged 76 years. Wood from the original tree was stored in Hank’s nursery, Brokaw Nursery Inc. of Saticoy, California. Some wood was used by Richard Stewart, nephew of Rudolph Hass, to make keepsakes for some members of the Hass family and of the Avocado Growers Association. A plaque now marks the location of that original tree.

“Avocado growers in La Habra Heights were told they could expect at today’s prices to increase their profits by $200 to $1000 per acre if they would have their Fuertes topworked to Hass. Avocado production figures from five La Habra groves, each having both Fuerte and Hass, were presented by James Beutel to show the greater production and profits from Hass as compared to Fuerte.” — “Record Attendance at 26th Annual Avocado Institute.” Farm News. University of California Agricultural Extension Service. Corona, California: Corona Daily News. Friday, 29 October 1954. Section Two, Page 3.

Hass Avocado is spelled “Hass”. Many people misspell it as “Haas”, which is the name of a fruit company in Washington State, and the name of an apple.

[1] “By 1931, he was planning to cut it down….. Joseph E. Upton was living with his wife, Robbie, in the small house on the Hass place in exchange for taking care of the avocado trees. As Upton, 86, recalls, he and his wife had been eating the fruit from the uncooperative seedling tree, which was then 5 years old, and thought it was delicious. True, the skin was dark purple, almost black, thick and rough, not like the thin green skins of the then-dominant Fuerte avocado variety. But the flesh of the fruit was creamy and not fibrous, with high oil content and a nutty taste. “I told him: ‘Mr. Hass, that’s good fruit,’ ” Upton said. ” ‘You should try it.’ ” Hass did and realized the Uptons were right.” — Dillow, Gordon. Family Tree : Hass’ 1st Avocado Seedling Still Stands and Bears Fruit. Los Angeles Times. 29 Marcy 1992.