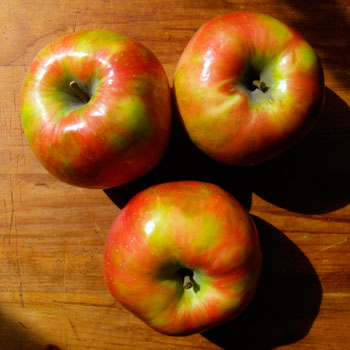 The skin is yellow and green covered with red blushes. The cream-coloured flesh is very crisp and juicy, with a coarse texture and a slightly tart taste.

The tree stands up well to very cold winters, and starts producing fruit in 3 to 5 years. The branches need thinning.

The stem needs to be hand-snipped during harvesting to avoid bruising.

Producers are betting big on this apple and planting the tree heavily, so expect to see lots of it. Problems are cropping up, though: in storage, the apples develop what is called “soft scald”, which is mooshy brown patches on and under the skin.

In Europe, the apple is marketed as ” Honeycrunch”.

Can be used for salads, cooking, or eating fresh.

Stores well. You can even store up to 12 weeks in the refrigerator.

Developed at the University of Minnesota, from a 1960 cross between Macoun and Honey Gold. One of the developers was a man named Jim Luby. [1] Introduced to breeders in 1991 and released in 1992.

In the fall of 2005, a man named Waldo Walsh, president of the Nova Scotia Fruit Growers’ Association (Canada), announced that many members of the association were hoping for government funding over the course of the next 5 years to help finance the tearing out of 10% of the trees at that time in their orchards and replacing them with Honeycrisp plantings. Their orchards had consisted mostly of McIntosh apple trees.

The patent on Honey Crisp expired in 2008.

[1] “It was 1982, and my colleague David was checking apples out in the field one September,” he says. “He came across the Honeycrisp tree, which had just started fruiting but was tagged for removal. He tried one of the apples anyway and thought it was really good, and I agreed. So we decided to put it on the market without much advertising or anything, and it took off.” — Farquharson, Vanessa. The invention of an apple: The Red Prince. Toronto: National Post: 20 February 2010.