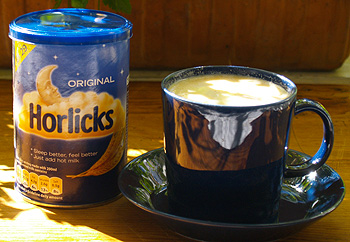 Horlicks is a malted milk powder that you mix with warm milk to make a drink. It is wheatier, and less malty-tasting than other such drinks.

The basic ingredients Horlicks is malted barley, wheat flour and evaporated milk. It is now available in many flavours including original, chocolate, banana, strawberry, light, etc.

Horlicks is served in some Chinese restaurants as a snack, usually sweetened with sugar. They serve it hot or cold — to serve it cold, they make it first with the warm milk, then add ice to chill it.

It is very popular in India, where special flavours and formulas have been developed for the market there.

It is also very popular in Malaysia, where it is present in 70% of Malaysian kitchens where it is used as a drink for children.

Horlicks is owned by GlaxoSmithKline (current as of 2007.) The largest markets for Horlicks are, in order, the UK, India and Malaysia. It is GlaxoSmithKline’s top selling product in Malaysia.

To use Horlicks as a drink: 2 or 3 tablespoons in a mug, add warm milk or water, and stir.

Horlicks is currently (2007) marketed in the West as helping to promote sleep at night.

James Horlick and William Horlick were from Gloucestershire, England. James was a chemist, working for a company that made dried baby food. He invented some food formulas for the company, and got the hankering to set out on his own. William, his younger brother, had previously emigrated to America in 1869. In 1873, James decided to join him in Chicago. That same year, they started their own company (J&W Horlicks) to make a malted milk drink for infants. They called their product “Diastoid.”

By 1875, they needed to move to a place that was larger, so they moved to Racine, Wisconsin. Their new factory was a small, one storey wood building, with seven windows in each side.

Their slogan was that they made ” Horlick’s Infant & Invalids Food.”

At various points, Horlicks biscuits and Horlicks ice cream have been made.

The first Horlicks bottles had the product information imprinted right on the glass.

Promotional mixing sets used to be sold consisting of a box that contained a jar of Horlicks, a tall, relatively slender plastic mixing pitcher, and a whisk-like thing made of a relatively flat disk with holes on it, attached to a long handle, that you used to stir and churn the Horlicks in the mixing pitcher before you poured it into your mug. Called the “Horlicks Easy Mixing Set”, it sold in England for 3 shillings. The plastic pitchers said on them, “HORLICKS MIXER: See mixing instructions on Horlicks Containers. The graduations are for seven and fourteen ounces respectively — one or two drinks. DO NOT USE BOILING LIQUIDS”

“Bollocks” is a term in the UK which is roughly equivalent to the North American slang word “bullshit.”

The word “Horlicks” has entered popular vocabulary in the UK as a polite replacement for the word “bollocks.” No one is quite sure how it started, but in the 1990s, the company decided to make it look like a parade and get in front of it with a TV commercial in which a housewife says “Horlicks” instead of something like “bollocks.”

In 2003, Jack Straw, the then British Foreign Secretary, used the phrase “a complete Horlicks” to mean a “complete cock-up.” But at the time he used it, the phrase was already so well known that it was out of fashion.

Nevertheless, in October of 2004, the new management of Horlicks, GlaxoSmithKline, not sharing the sense of humour that the earlier management of the product did, hired a public relations consultant, Mark Borkowsk, to advise on how to discourage the slang usage of the word Horlicks.

The Horlick Mountains in Antarctica were named by Admiral Richard Evelyn Byrd (25 October 1888 to 11 March 1957) in honour of William Horlick. William Horlick helped to sponsor Byrd’s 1933 to 1935 expedition to Antarctica, both with money and supplies of Horlick’s.

Reynolds, Nigel. Steaming Horlicks fed up with slang use of its name. London: Daily Telegraph. 18 October 2004.

This web site generates income from affiliated links and ads at no cost to you to fund continued research · Information on this site is Copyright © 2022· Feel free to cite correctly, but copying whole pages for your website is content theft and will be DCMA'd.
Tagged With: Soft Drinks