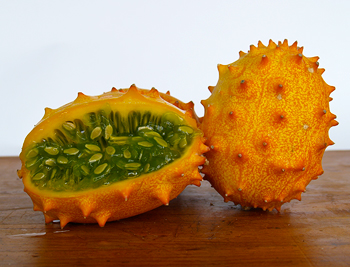 Inside, the flesh looks like lime-green jelly, and has a somewhat grassy smell to it.

This is a problematic melon. Unless there are two varieties floating around, then it appears that in eating this melon two genetically different taste bud genes are emerging in humans.

Some food writers say the seeds are edible, and that the wonderful sweet and sour taste is a complex combination of banana, cucumber, lime, mango pineapple and watermelon flavours.

To others, the seeds are technically edible, but they are as appealing as the tough, bitter and stringy seeds found in a cucumber that is past it. And it could be that to people in this genetic camp, the taste is so complex that they can’t detect it: to these people, there is no taste at all. Zip-dee-doo-dah flavour. These people seem to be in the same camp as most mammals, because most mammals won’t even touch it.

It is grown in California and New Zealand. Its copyrighted name is “Kiwano.”

The shell is not edible. You eat it by cutting the fruit in half and spooning the green goo out. Not appropriate for slicing into wedges.

Never store in refrigerator. Don’t store near bananas or apples or any fruit that produces a lot of ethylene ripening gas.

Native to South-west and Central Africa. Introduced to Australia and New Zealand in the 1930s as an ornamental plant, which escaped cultivation and became a weed.

Scuttlebutt has it that this is the fruit used on Star Trek when they want to portray alien fruit. You may have seen it in the series either in a bowl or scurrying about.

This web site generates income from affiliated links and ads at no cost to you to fund continued research · Information on this site is Copyright © 2021· Feel free to cite correctly, but copying whole pages for your website is content theft and will be DCMA'd.
Tagged With: New Zealand Food