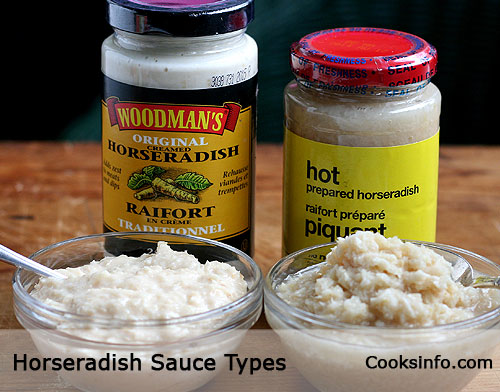 There are two types of Horseradish Sauce, Creamed and Pickled (aka “Prepared Horseradish”.)

The pickled / prepared version is more popular in North America and is what people tend to mean by horseradish sauce; the creamed version is more popular in Britain and tends to be what people there mean by horseradish sauce. Hardcore fans anywhere in the world will distinguish between the two types and often have both on hand at once.

The pickled version of horseradish tends to have a more pungent taste, to be coarser in texture, and, is often in the chiller sections of supermarkets because it always requires refrigeration.

The creamed is smoother, with a milder taste and creamy texture, and tends to be shelf-stable, not requiring refrigeration until opened. It will also generally be a bit more expensive.

To make pickled horseradish (prepared horseradish), grated horseradish is pickled in a mixture of vinegar, sugar and salt. It is sometimes sold mixed with grated beetroot added, giving it a red colour and a sweeter taste.

To make horseradish sauce, grated horseradish is stirred into a dairy product such as sour cream or very thick cream (such as double cream) .

Either type of sauce is often mixed with mustards, both at home and commercially, and with gravies (at home.)

Bring to a boil the salt, sugar and vinegar, and whisk till dissolved. Remove from heat; let cool for a few minutes, then stir in the horseradish.

Store in sealed container in the refrigerator and use up within about 2 months.

Pickled horseradish is usually 0 Weight Watchers PointsPlus®; the creamed will cost a point after a tablespoon or two, depending on the brand.

Before peppercorns and peppers became affordable as everyday items in households, Europeans had to rely on horseradish — along with mustard — to give their food a “kick.”

This web site generates income from affiliated links and ads at no cost to you to fund continued research · Information on this site is Copyright © 2023· Feel free to cite correctly, but copying whole pages for your website is content theft and will be DCMA'd.
Tagged With: English Sauces, Horseradish