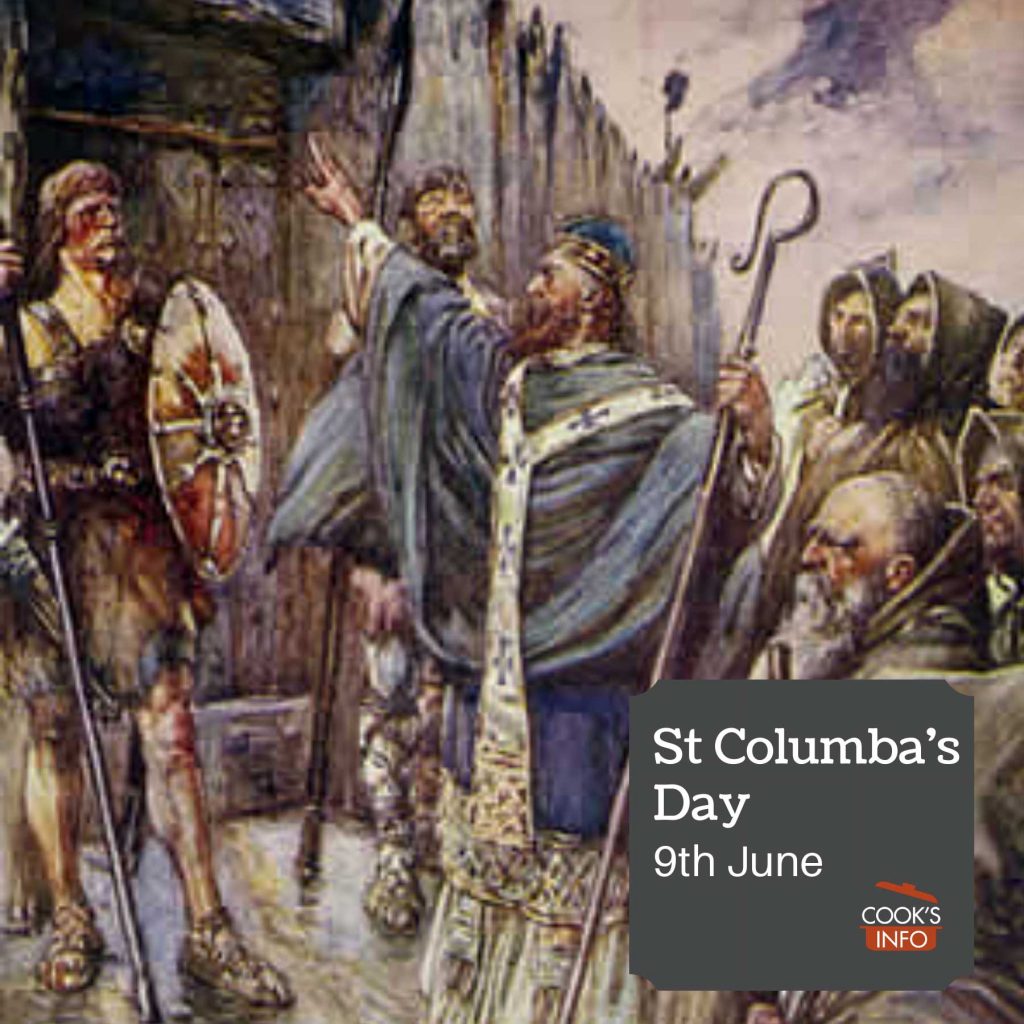 The 9th of June is St Columba’s Day. He was an Irish saint who founded the famous monastery of Iona off the west coast of Scotland.
Contents hide

Among St Columba’s food dealings were changing water into wine, causing water to come out of a rock, making a herd of cows increase miraculously, and exorcising a demon from a pail of milk (sic.)

A poor farmer had only five cows; Columba blessed them, saying that the farmer would one day have 105 cows. Adomnán recorded that this came true, but didn’t say how long it took. He did say, though, that the man never had any more than 105 cattle: whenever the cattle reached that number, something would happen to the extra.

Columba would not, though, allow any cows on the island of Iona. He said that women always follow cows to tend them, and thus, cows bring trouble. One time, five men were fishing in the river Sale and caught only five fish. Columba said “God will provide a bigger fish for me; try your nets again,” and they caught the biggest salmon they had ever seen.

According to one legend, he ate nothing but bannocks and water, and slept on rock.

He also reputedly either brought back to life a man killed by the Loch Ness Monster, or saved him by driving Nessie away with a cross — versions vary.

St Columba was reputedly born 7 December 521 in what is now County Donegal, Ireland. He founded a monastery on Iona Island, off the west coast of Scotland.

Most information about his life comes from the book “Vita Columbae” (“The Life of Columba”) written long after he lived by Adomnán, the ninth Abbot of Iona (died 704.)

In 560, while still a young man, he had been involved in trying to making an unauthorized copy of a Psalter that Saint Finnian had. Several monks were killed in the altercation that ultimately followed, the Battle of Cúl Dreimhne in 561. Consequently the Irish King had Diarmaid exiled to Scotland.

After a few months in Scotland, he got permission from a west Scotland kingdom called Dál Riata to establish his Iona monastery. Twelve followers joined him. In return for the permission, Columba gave the Scots education for their sons, and diplomatic services. From the island he brought Christianity to the heathen Scots.

He never returned to Ireland. He died 9 June 597 in Scotland.

Life of Saint Columba. CHAPTER XV. Of the driving out of a Demon that Lurked in a Milk-pail.

“AT another time, a certain youth, named Columban, grandson of Brian, came forward hurriedly, and stopped at the door of the little cell in which the blessed man [Ed.: St Columba] was writing. This same person, being on his way home from the milking of the cows, and carrying on his back a vessel full of new milk, asked the saint to bless his burden, as he usually did. Then the saint, being at the time at some distance away in front of him, raised his hand, and formed the saving sign in the air, which at once was greatly agitated; the bar, which fastened the lid of the pail, being pushed back through the two openings that received it, was shot away to a great distance, while the lid fell to the earth, and the greater part of the milk was spilled upon the ground. The young lad then laid down the vessel, with the little milk that remained, on its bottom on the ground, and kneeled down in prayer. The saint said to him, “Rise up, Columban, for thou hast acted negligently in thy work today, inasmuch as thou didst not banish the demon that lurked in the bottom of the empty vessel by forming on it the sign of the cross of our Lord before the milk was poured into it; and now, as thou seest, being unable to bear the power of that sign, he has quickly fled in terror, troubled the whole vessel in every corner, and spilled the milk. Bring the vessel, then, nearer to me here that I may bless it.” This being done, the half-empty pail, which the saint had blessed, was found the same instant, filled by divine agency; and the little that had previously remained in the bottom was at once increased under the blessing of his holy hand, so as to fill it to the brim.” — Life of Saint Columba, Founder of Hy. Written by Adomnán, Ninth Abbot of that Monastery, ed. William Reeves. (Edinburgh: Edmonston and Douglas, 1874)