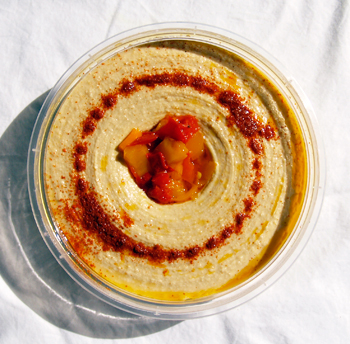 The version of hummus that we are most familiar with is made from cooked, ground chickpeas, garlic, lemon juice, and tahini (sesame seeds ground into a paste.) The ingredients are made into a thick, pasty purée that can be used as a dip for pita bread and fresh vegetables or as a spread for sandwiches.

Hummus originated in the Eastern Mediterranean, though it is so common throughout the area that there is no way of really knowing where it actually started.

Egyptian recipes tend to add cumin. Some variations in Syria don’t even use tahini.

Many modern takes on hummus now add any of the following: mashed avocado, roasted eggplant, roasted garlic, fresh ginger, green pepper, mint, red pepper flakes, roasted red pepper, sun-dried tomatoes, etc. There are also versions that, aiming to be lower-fat, are made from other beans such as soybeans.

Though hummus is often served in Greek restaurants in English-speaking countries, people in Greece actually don’t eat it as part of their traditional food — it really only became known in Greece starting in the 1970s, through tourists.

Some modern foodies will have you peel the cooked chickpeas before you mash them.

Very high in fat, but none of the fat is saturated.

Freezes well. If the oil from the tahini separates when you thaw the hummus, just stir the oil back in. Once thawed, you may need to adjust the consistency with a little added lemon juice or oil.

There are many possible ways to spell Hummus in English — such as Homos, Hummis, Houmous and Hummos. The bottom line is that there really is no proper English spelling. An English transliteration of the full name in Arabic would be Hummos bi Tahina or Hummos bi’l-Tahina. The word “Hummus” actually means “chickpea” in Arabic.

This web site generates income from affiliated links and ads at no cost to you to fund continued research · Information on this site is Copyright © 2022· Feel free to cite correctly, but copying whole pages for your website is content theft and will be DCMA'd.
Tagged With: Pastes