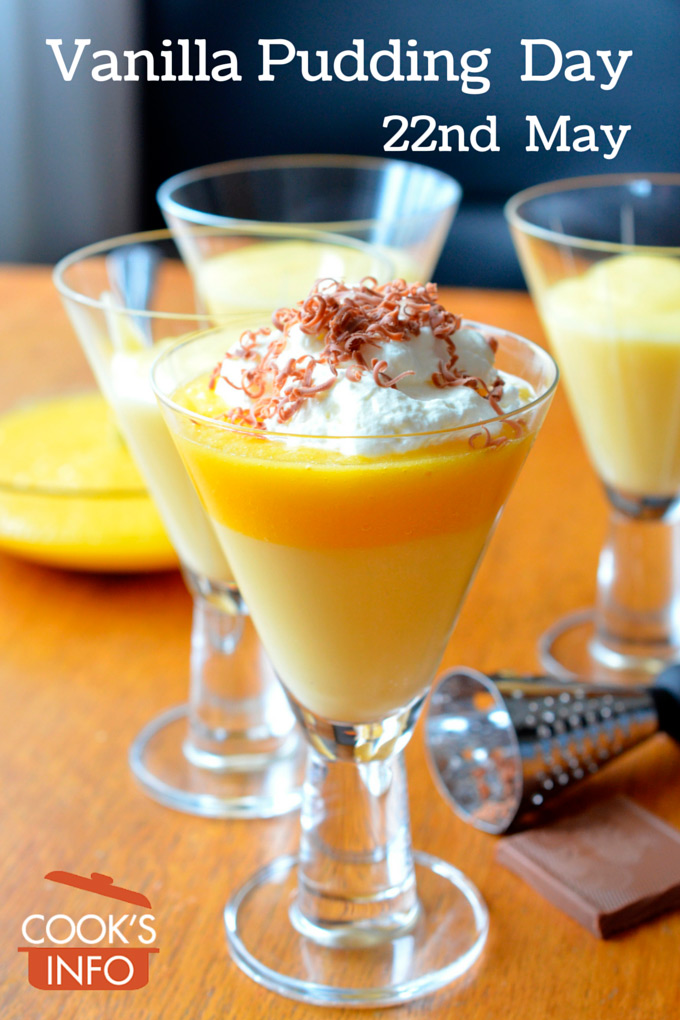 The 22nd of May is Vanilla Pudding Day.

You could celebrate by whipping up a vanilla pudding from scratch, or by cheating and using a powdered mix, or by just whipping open a “pudding cup” on the run.

Vanilla pudding is not really known in England. The closest thing is custard or Angel Delight. Some people say blancmange, but the stiff texture of that is not right.

You could also raise a glass today to the creator of Sherlock Holmes, English writer Sir Arthur Conan Doyle. It’s his birthday; he was born on this day in 1859.

The earliest print mention of a “Vanilla Pudding Day” in May that CooksInfo is aware of dates from 2012:

“Happy International Day for Biological Diversity! While pondering biodiversity issues like endangered species, climate and ecosystem change, have some vanilla pudding, then go pick up a new guitar, because it’s also Buy-a-Musical-Instrument Day and National Vanilla Pudding Day.” [1]Yorio, Kara. A day for every cause. Passaic, New Jersey: The Herald-News. 22 May 2012. Page B1, col. 1.

The holiday has been circulating on the Internet, though, since at least 2004, which is when CooksInfo first reported on it.

This web site generates income from affiliated links and ads at no cost to you to fund continued research · Information on this site is Copyright © 2022· Feel free to cite correctly, but copying whole pages for your website is content theft and will be DCMA'd.
Tagged With: Puddings