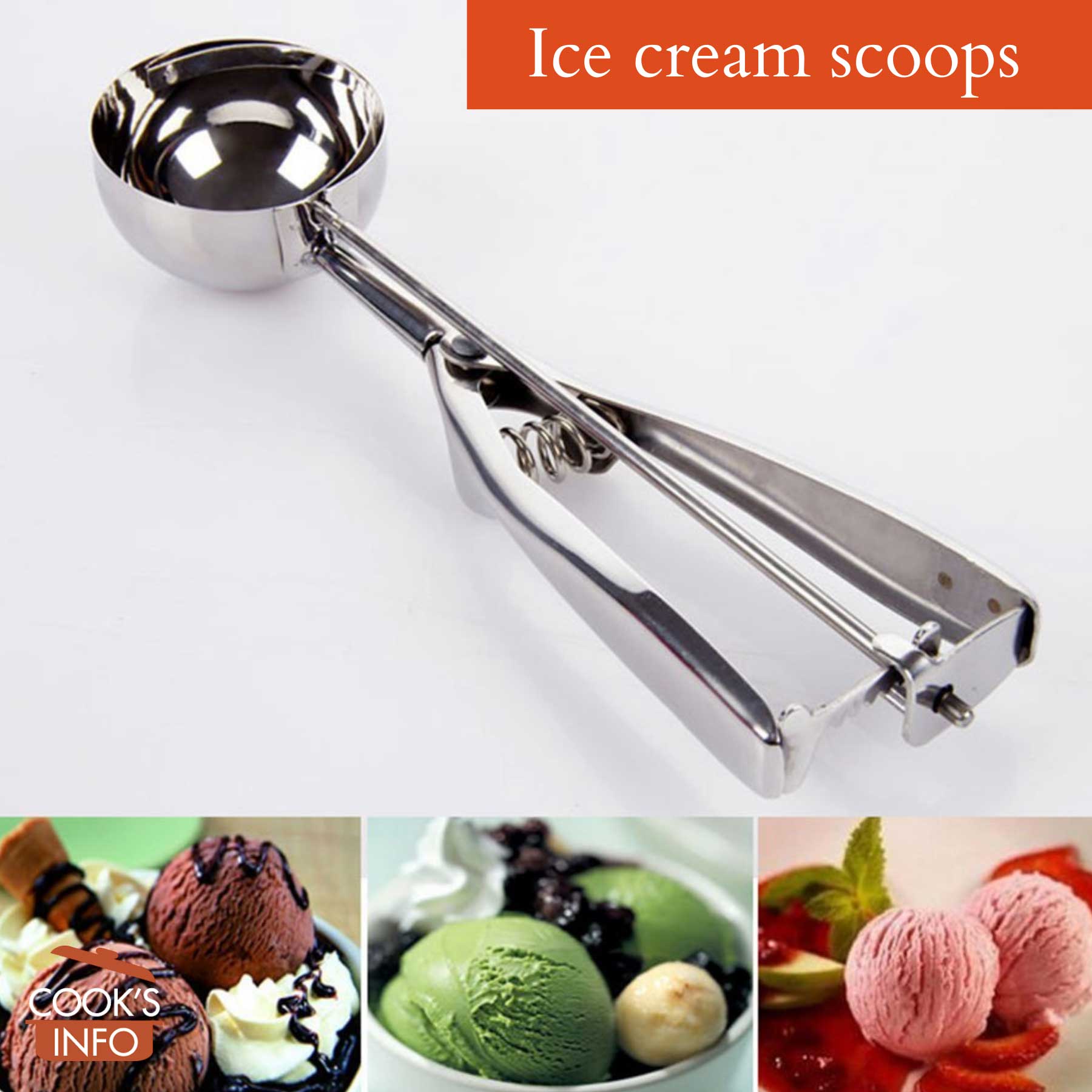 An ice cream scoop is a half-bowl attached to a long handle used for serving ice cream, frozen yoghurt, gelato, and sorbet.

The bowls come in different sizes. Small ones (1 inch / 2 ½ cm) mean that you have to make more scoops to make up a serving of ice cream, but they can do double-duty as melon ballers. Large ones will be about 7 to 8 wide (3 inches).

Sometimes ice cream scoops are numbered. The number indicates how many of these scoops would be required to equal an American quart (32 oz / 950 ml) in volume. One that you’d have to have 8 scoops to equal a US quart would be labelled a #8, and each scoop would be obviously 4 oz (8 x 4 equalling the 32 oz in a US quart.)

Some ice cream scoops have a squeezee mechanism on the handle. When you squeeze it, a spring-operated lever sweeps across the bottom of the bowl under the scoop of ice cream, causing it to more easily fall out. This saves having to shake it out (possibly detaching in mid-upward swoop causing it to land somewhere on the floor or ceiling.) A variation of this has two wires that start out in the middle of the bottom of the bowl, and sweep to their respective sides when a lever is pressed. Not all of these types have levers which are necessarily easily operated by left-handed people.

Some ice cream scoops are heated. Only the bowl heats up, not the handle. Some have batteries in them that heat them up — you have to turn them on and let them heat up first before using, Others, made of polymer, are designed to be heated up in the microwave. Still others have a chamber you fill up with hot water, then seal it with a plug, then start scooping.

Non-stick ones have antifreeze inside the walls of the bowl. The heat from your hands warms the handle, and presumably this heat passes into the bowl. Most of these are not dishwasher or hot-water safe.

Very few scoops are up to taking on a truly rock-hard tub or block of ice cream. Many people who have summer jobs scooping ice cream swear they build up gym-calibre muscles on their arms. Still, most ice cream scoops are better than using regular metal or plastic spoons, which will invariably break or snap on you.

Ones with sharp edges on the rims of the bowls can cut through hard ice cream more easily. Some have a pointy-ended bowl, to help dig into square corners of ice cream sold in boxes. Long handles also help with leverage.

Ice cream scoops can be used to serve mashed potatoes or cottage cheese in attractive mounds. 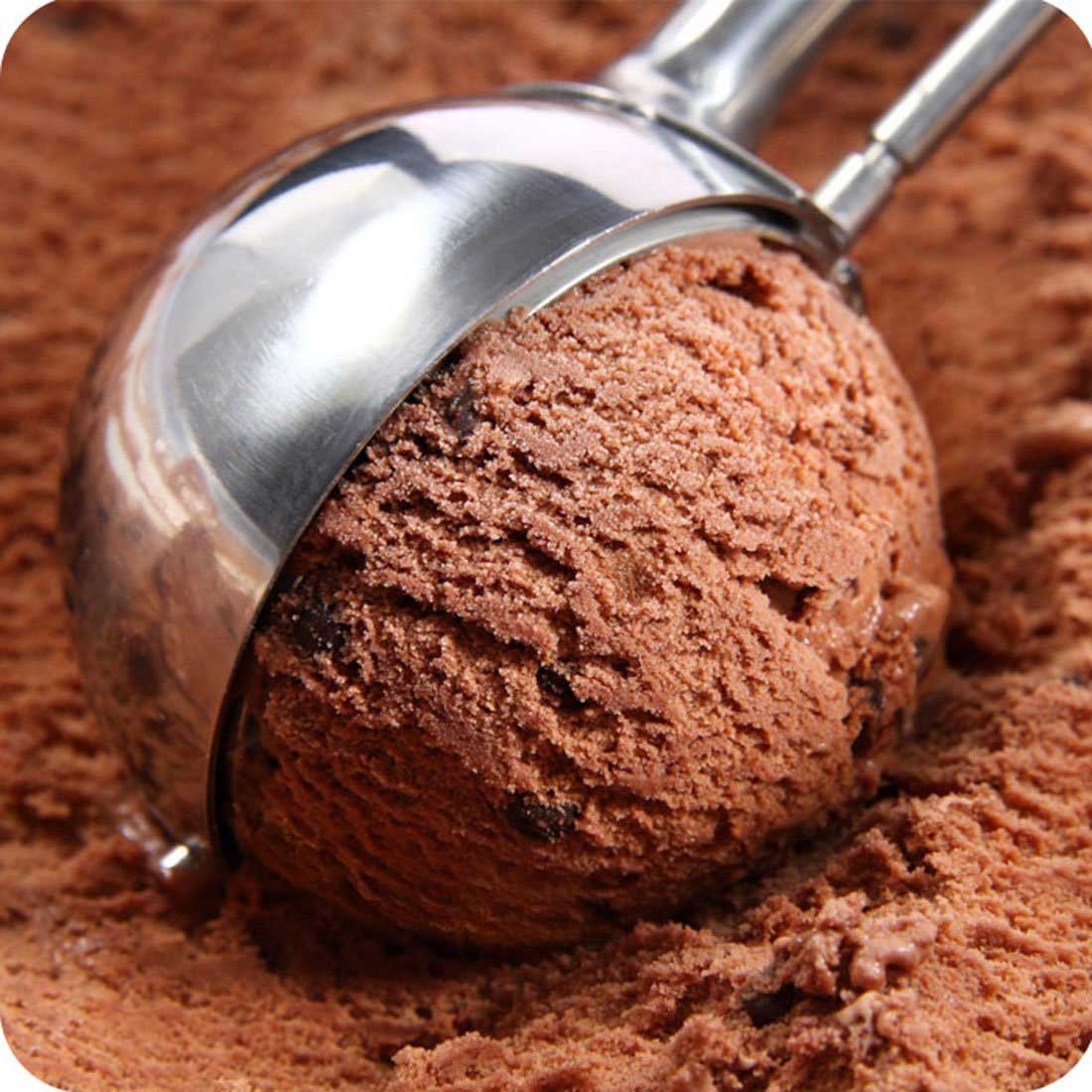 Ice cream scoops first appeared in England in the 1800s. They were known as “ice spades” (because ice cream was part of the emerging category of desserts known as “ices”), and they really were shaped like spades.

Victorian ones were made of sturdy silver, and they were shaped like spades, with just slightly raised edges. By the 1870s in England, the spade-like shape had disappeared, presumably replaced by ordinary spoons.

Ice cream scoops started to appear in America by the 1830s.

For a while, broad-bladed silver knives were used to serve ice cream with during the second half of the 1800s on both sides of the Atlantic.

Lever-action scoops were being sold by the early 1900s.

Some older models, known as “slicers” had a blade that went across the top of the bowl, to create a perfectly levelled-off scoop. These were popular during the Depression of the 1930s, when struggling shop keepers wanted to control costs through portion control. 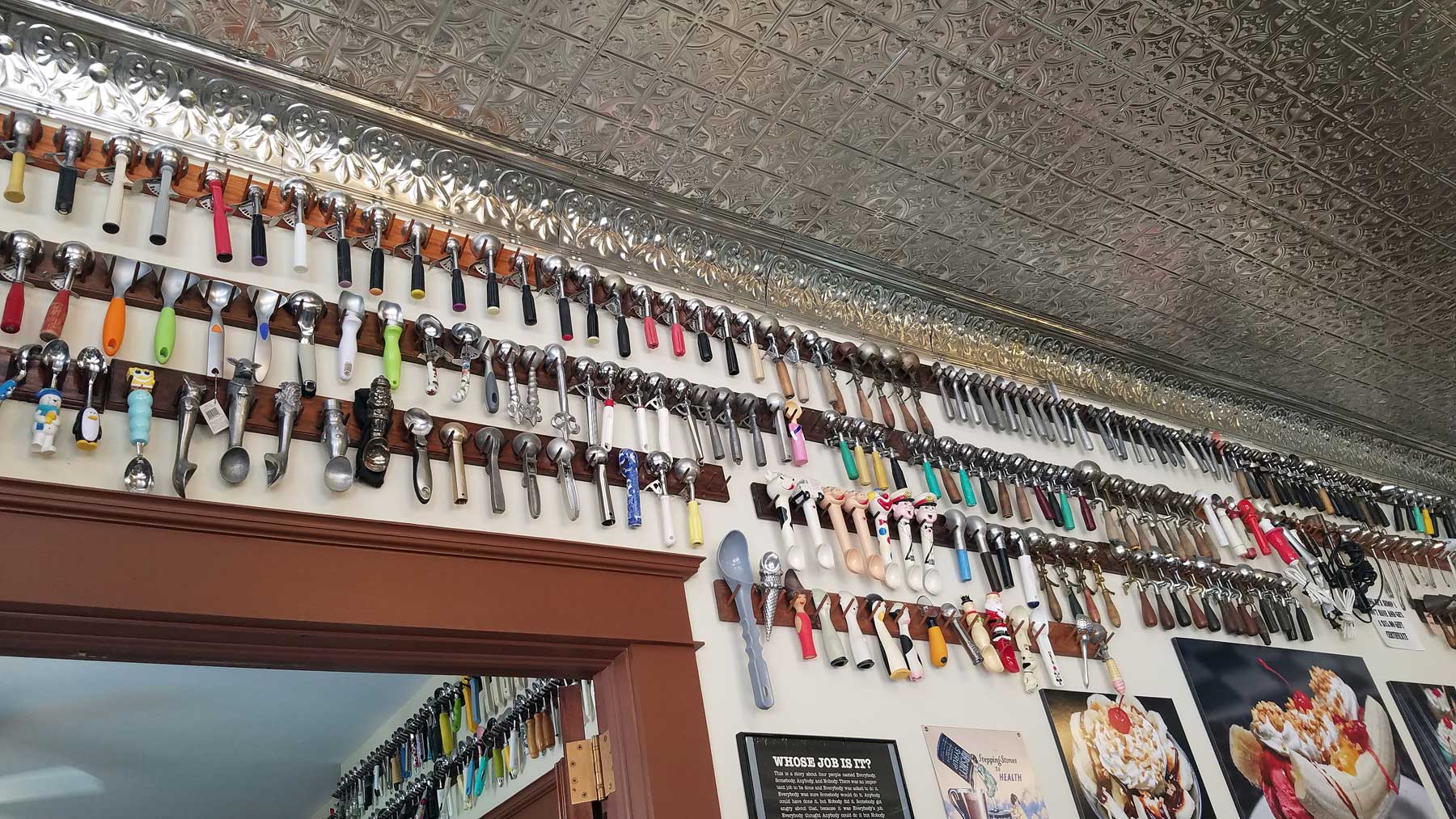