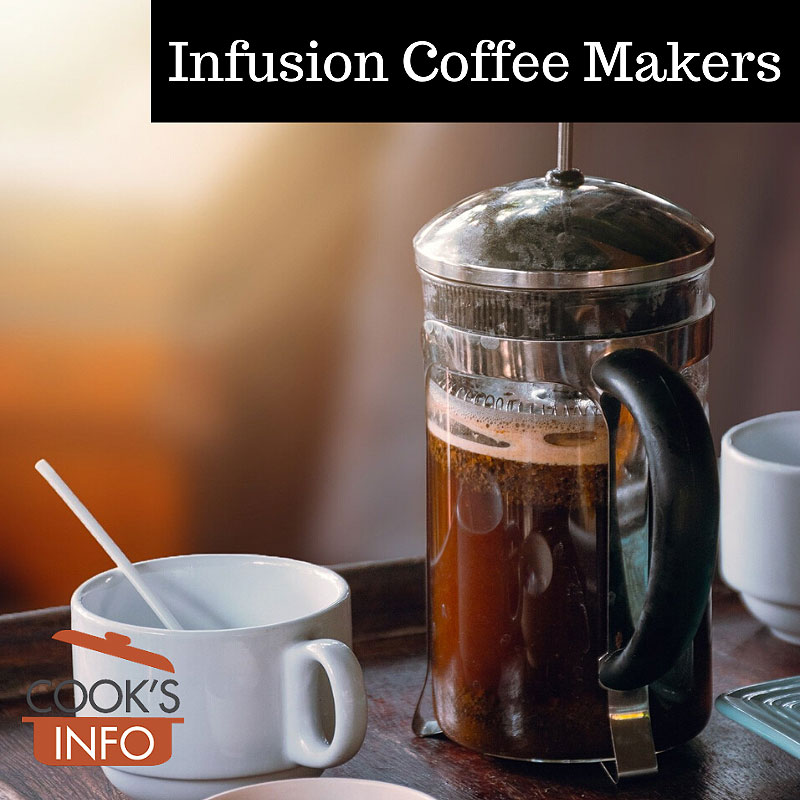 An infusion coffee maker has two main parts to it, a carafe and a plunger.

The coffee gets “filtered”, but without any paper to absorb some of the flavour oils away from the coffee, this method allows for more oils and suspended flavour particles in the coffee. It makes a denser coffee with more substance. Some people like the ceremony involved, which is a bit more elaborate than pressing a button on an electric drip-machine.

The plunger is a disk (sometimes referred to as a screen) attached to the bottom of metal rod that, at the top, has a knob on it. The metal rod goes through the centre of a lid, and has the disk at one end underneath the lid; the knob at the other end on top of the lid. The disk is a metal frame with a mesh screen cover on it. The mesh may be nylon or stainless steel; stainless steel lasts longer. The disk fits snugly into the carafe, so that as you push the plunger down, there’s no space on the sides for coffee grounds to escape upwards along the sides. As you press the plunger down, the ground coffee gets trapped underneath the plunger, and driven down to the bottom of the coffee pot.

The carafe can be metal, plastic or glass, but is usually glass. It is shaped like a tall cylinder, with a pouring spout at the top front. Glass carafes sit in a metal frame, with a handle attached to the back, Glass carafes are very fragile — many meet untimely ends by being vibrated off their resting places on top of fridges, or accidentally being brushed off a counter, leaving you with your plunger and stylish but now useless frame. They certainly aren’t something you’re going to want to take camping with it. Stainless steel carafes have the advantage of being unbreakable, and are usually insulated — but the disadvantage is that you can’t “see” how the coffee is coming along inside as you are brewing it.

Carafes come in different volumes, from personal to dinner-party size. A carafe won’t hold the amount of water that it seems to say it will. One that says, for instance, that it holds 32 oz of water, may just hold 28 oz of water once you have the ground coffee in it as well.

You boil the water outside the pot, either in a kettle (electric or stovetop), or in an ordinary pot on the stove. 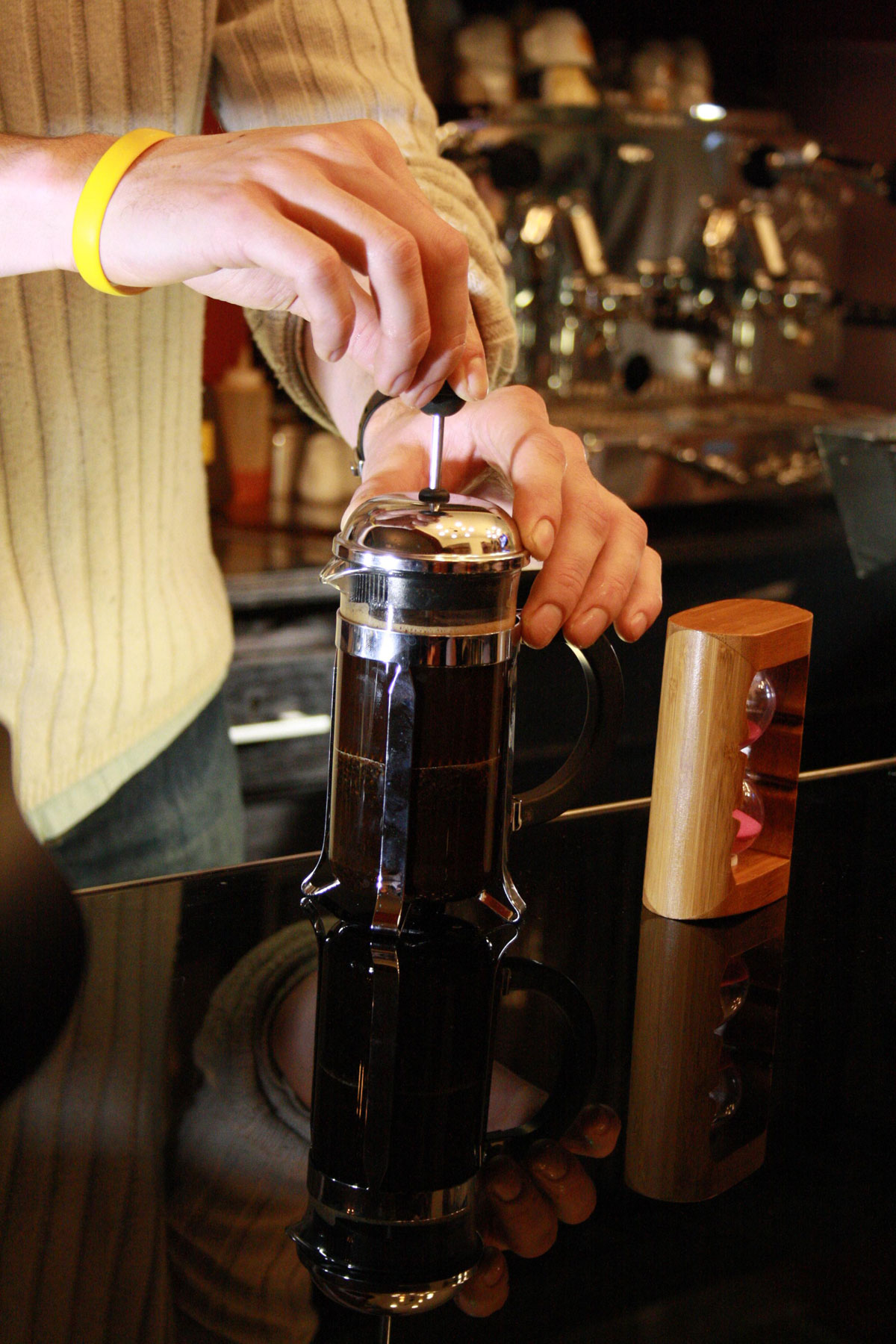 It is best to warm the carafe, with the plunger in it, first with boiling water in it for 1 to 2 minutes. Then empty out the warming water, measure in the coffee, and pour in fresh hot water. Ideally, the water should be just a bit below the boiling point — 90 to 96 C (195 to 205 F.) But admittedly, with all our electric kettles designed to tell us when the water has actually reached the boiling point, it’s hard to know when it’s less than that.

Some people like to stir it at this point before proceeding. Now, put the plunger in place, lid on, but only push the plunger down after the steeping time. Let coffee steep for 3 to 5 minutes, then push the plunger down slowly. If the plunger seems to get stuck and won’t go any further without a lot of force, pull it back up again a little ways, then try again. If the plunger just won’t go any further say than halfway down, you have either put in an insane amount of ground coffee, or have used coffee ground far too finely. When you press the plunger down when the jug has no coffee in it, the knob of the handle will come right down to the lid. When it has coffee in it, don’t expect it to, or try to make it to — it can’t, because the ground coffee is occupying space at the bottom of the jug.

For an average person’s taste, use 2 tablespoons of ground coffee per 175 ml (6 oz) of water. The coffee should be medium grind, similar to that for a drip machine, or medium-coarse.

You can now get electric ones. The coffee carafe itself is cordless, but it sits on a base that gets plugged in the wall. To use it, you fill the carafe with water, put it on the base, and turn it on, which causes the water to boil. Then when the water has boiled, you add your coffee, plunge and continue as usual.

Coffee won’t stay warm long in a French press. You can buy fabric covers which operate along the same principle as tea cozies designed to wrap around the sides, usually fastened with velcro, If you have one, put it on just before you pour the brewing water in, so that you are conserving the heat right from the start. If you don’t, you may wish to consider transferring it as soon as it is done into a heated thermos coffee pot. This will both keep the coffee warm, and get it away from the coffee grounds, which cause it to keep on steeping to the point eventually of bitterness. Many advise even to pour it out of the insulated stainless steel ones once brewed.

If you want coffee to last the morning, you can go one of two ways:

Stray bits of ground coffee can enter the coffee now and then. In fact, every cup of coffee will probably always have a bit of sediment settling in the bottom of it.

A popular brand name is “Bodum.” 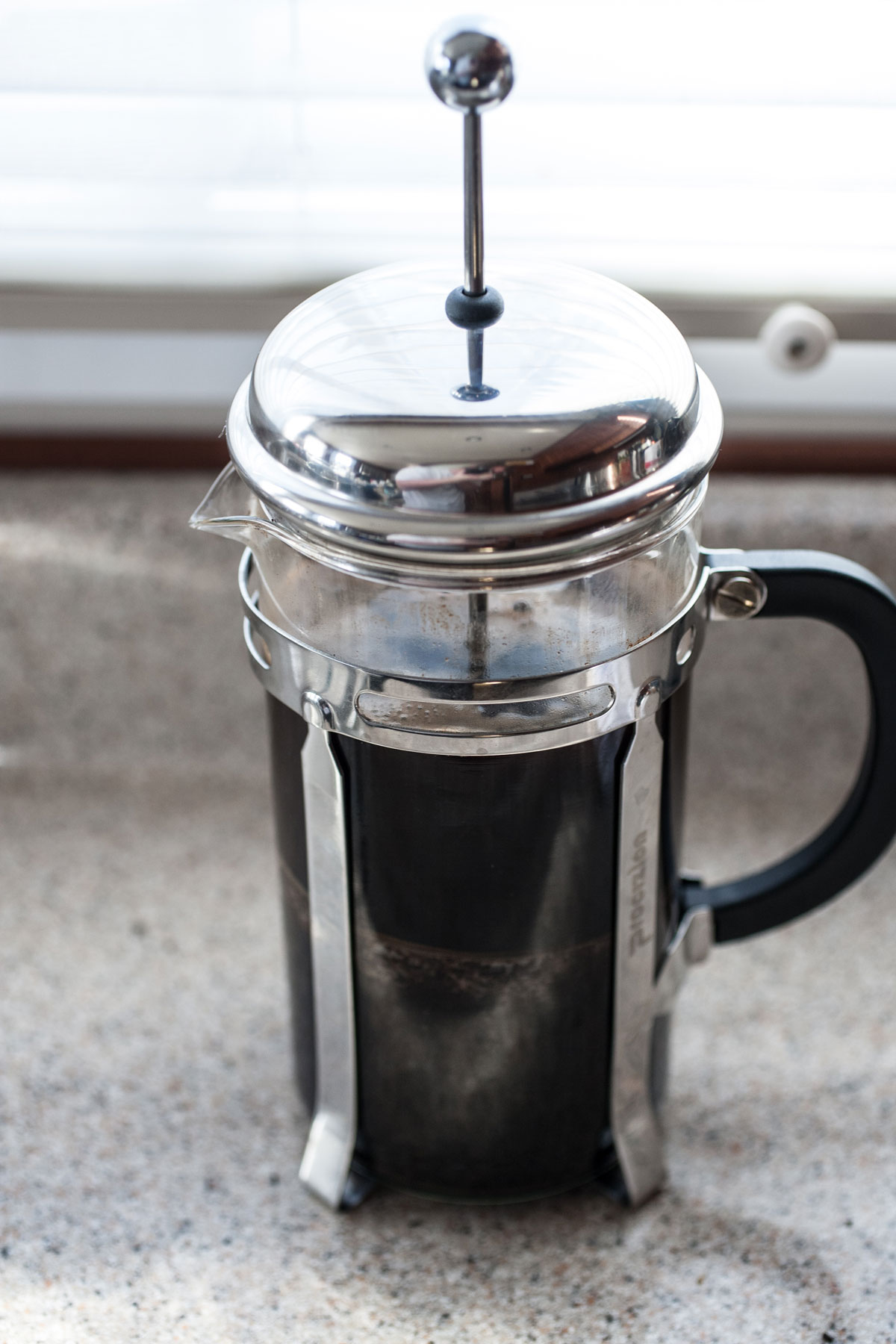 Put through dishwasher, or clean well after use with hot water and soap.

The coffee makers were made slowly throughout the second half of the 1800s, mainly of metal. The persistent problem was grounds escaping up around the edges of the metal screen.

Here is their description of their improvement from their UK request filed on 13 October 1932:

“[a plunger] characterized by the feature that the piston-like filter is provided around its periphery with resiliently deformable seaing means, such as one or more split rings of any form, a helical coiled spring or the like, or a solid or hollow rubber ring or the like, which prevent liquid from leaking past the periphery of the filter and permit the filter to be pressed down by a moderate amount of force…”

A patent for the design of a plunger closer to that used today was awarded in 1936 to “Bruno Cassol”, Milan, assignor to Gemma Barelli Moneta, Milan, Italy (the patent says that the application was filed in America on 26 February 1935, in Italy on 2 March 1934. US patent number 2,053,021 received on 1 September 1936). Cassol’s invention was a plunger that hugged the size of the jug, ensuring that the coffee grounds stayed below.

Fallero Bondanini (of Lausanne, Switzerland) was granted US patent number 2,900,896 on 25 August 1959 for improving upon Cassol’s design. He said in his filing request, “It is seen in Fig. 3 that the filter (6) has a turned up edge (6c) which assumes the form of the wall (8d) in order to dispose itself between this wall and the inner surface (2b) of the pot….. frame comprising two sheet metal disks formed with open work to define said perforations, one of said disks defining a dish-shaped until and said filter being mounted between said disks…”

Bodum started dominating the market outside the UK in the late 1970s with their sophisticated designs.

“In the particular case of coffee infusion, the advantage offered by vessels of vitreous or ceramic material is well known. However the filters thus far known do not completely solve the problem of maintaining the complete and continuous contact of the filter packing against the cylindrical wall of the vessel so as to secure a satisfactory tightness, owing to the inaccuracies in the internal diameter of the vessel which are unavoidable in the workmanship of vitreous and ceramic vessels.

Sometimes referred to in English using the French word “cafetière”, but that word means “coffee maker” as in, any kind of coffee maker that makes coffee. A more precise French term for it is actually “Cafetière à piston filtrant.”

In the 1960s, infusion coffee makers were introduced into the UK by the Household Articles Ltd company. They called their version “La cafetière.” They were still making it under that brand name as of 2020. 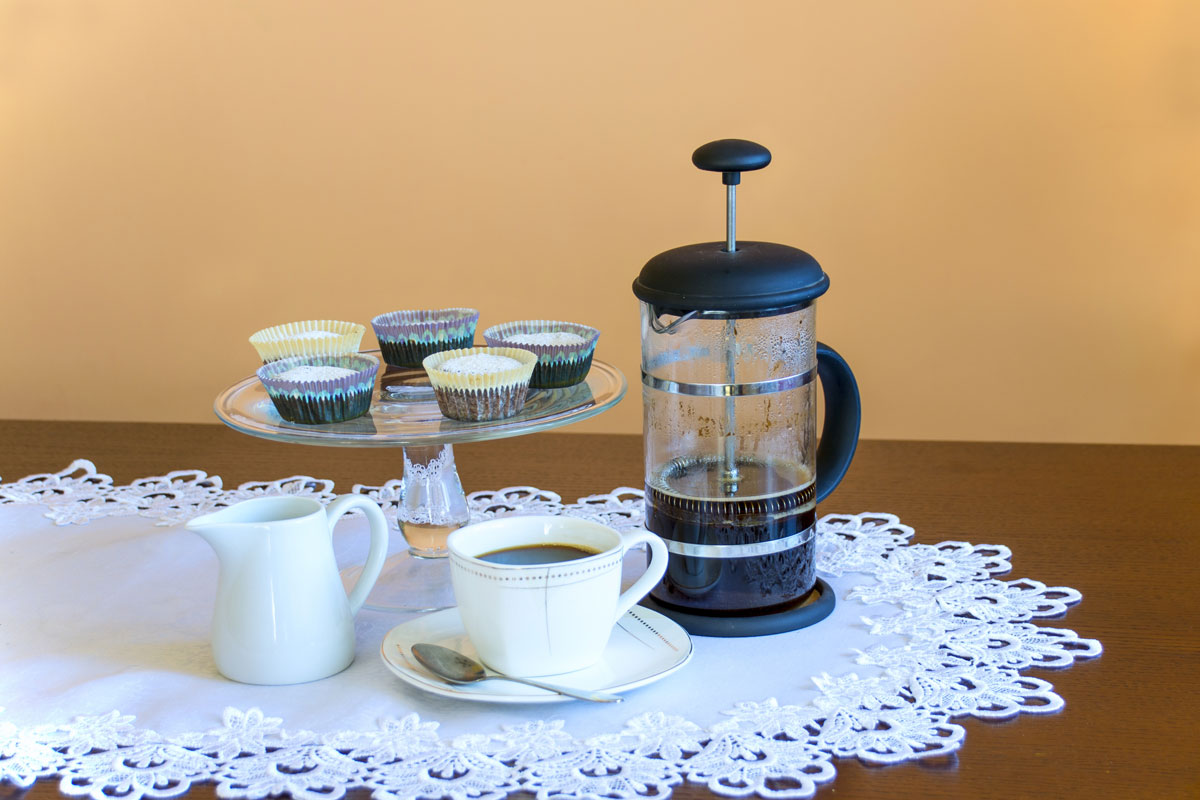