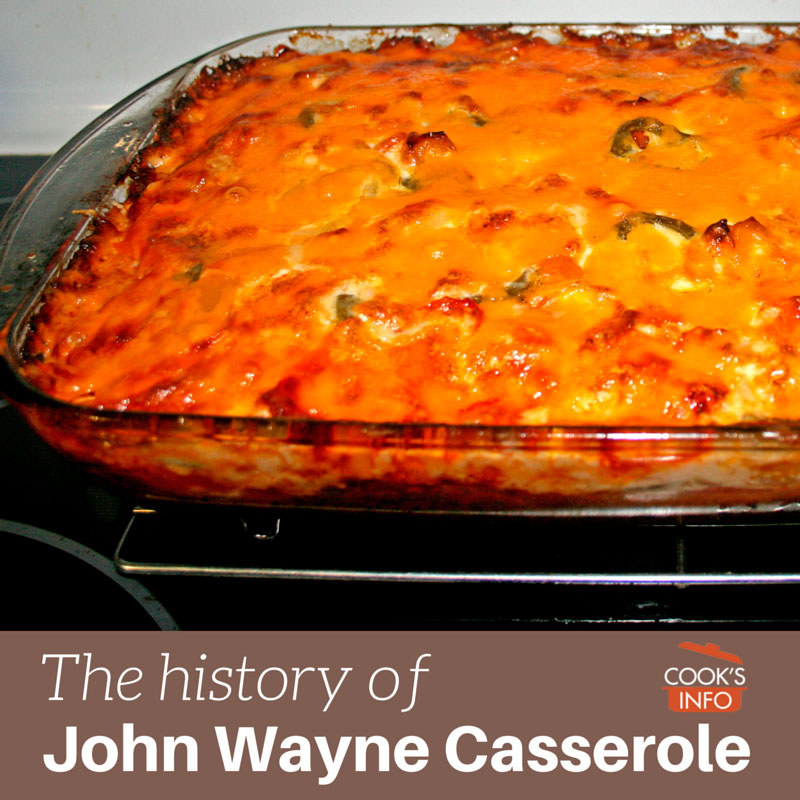 Contents hide
John Wayne Casserole is a crustless, vegetarian, cheese and egg casserole recipe. Its origins are traced back as far as John Wayne, the American actor (26 May 1907 – 11 June 1979.)

Wayne directly contributed the recipe to a 1979 cookbook titled, “Cooking with Love from Cara and Her Friends”, compiled by a Cara Connery. It is unknown where Wayne got the recipe from.

Over the years, a different casserole also named “John Wayne Casserole” has emerged, popularized by the University of Mississippi Medical Center Cafeteria version in Jackson, Mississippi. It is very different in composition from the original, having in common only three ingredients — jalepeno peppers, cheese, and tomatoes, and the “south-western” theme. This Mississippi version adds a crust and meat, drops the eggs, and cuts the amount of cheese down by three-quarters. This version is served every other Thursday at the cafeteria. They had stopped serving it at one point, but brought it back by popular demand from staff and faculty, who have nicknamed the dish “The Duke.”

“The John Wayne Casserole with Southwestern flavors quickly became a cafeteria favorite when it was introduced. ‘It was not unusual to see lines out the cafeteria door, and it has always been a top seller,’ says Williams [Ed: Resa Williams, food production manager at UMC for 22 years]. ‘We’ve tried putting other menu items up against it, but it still proves to be the one that people want.’ The spicy concoction is clearly a preferred dish and likely to be a part of UMC cafeteria’s offerings for years to come.” [1]

Neither version — the original 1979 version nor the Medical Center version — can be said to be “light and lively”.

The recipe for John Wayne Casserole was first published in a 318 page, softcover cookbook dated 1979. The book, titled “Cooking with Love from Cara and Her Friends”, was a compilation of recipes from various famous people, assembled by Cara Connery over the course of 2 years. The book was a fundraiser in aid of the American Cancer Society.

Cara Connery lived in Beverly Hills, California. She’d had several relatives die from cancer, which left her wanting to do something for the cause. She had an interest in cooking, so with the aid of her mother Jacquie (Jackie?) Connery, in January 1978 she started to assemble recipes for a cookbook to raise money for the American Cancer Society. Her idea was to assemble recipes from famous people. She was 10 years old at the time.

She wrote to 1,400 famous people in total, with her mother helping her look up all the addresses in their local library. She wrote asking them if they had a favourite recipe they’d like to contribute to the project.

The book had a few mishaps along the way. Some of the material was lost in a house fire in 1978. Despite that, the book was finished in the summer of 1979, but the manuscript was lost shortly after, so compiling and writing it had to start again. Cara wrote the commentary and did the art work. During the re-writing, the Connerys learnt that their presumption that the American Cancer Society would publish the book for them was false: the Society in fact had a policy against publishing such books. Consequently, she and her mother undertook to raise $20,000 to self-publish 10,000 copies of the book. Her mother took on two part-time jobs to help with this goal.

The first printed copies with their bright yellow soft cover were received by them ready to ship in December 1980; they had 1,000 pre-orders already, many of those being from the celebrities they’d contacted. The book sold for $10.60 a copy. About $4.00 a copy went to the Cancer Society, minus $6.00 for the costs of printing, mailing and taxes. She and her mother covered all the other expenses themselves.

By this time, Cara had started school at Beverly Hills High School in Beverly Hills, California (1980 to 1983.) She published a follow-up “Cooking with Love from Cara and Her Friends Volume 2” in 1981, and then, a children’s cookbook after that. The work on the cook books, plus the travel to promote them, disrupted her high school studies, but she managed to graduate all the same, and received a “Good Humanitarian Award” from Mayor Tom Bradley of Los Angeles in 1982 for her work.

After graduation, despite her demonstrated interest in food, she took jobs outside the food field for the next 20 years. By the end of 2003, though, she had moved from Los Angeles to Las Vegas, Nevada where she got a job as a prep cook at Bourbon Street Hotel in Las Vegas. In 2008, Cara started studies for a Culinary & Pastry Arts Degree from the College of Southern Nevada. She is still alive as of 2011.

Recipe contributors to Volume 1 of “Cooking with Love from Cara and Her Friends” included Alan Alda (whole wheat bread), Captain Kangaroo (pork chops with sauerkraut and apple), Ed Asner (noodle pudding), Golda Meir (chicken soup), Senator Hubert H. Humphrey (beef soup), President Jimmy Carter (5 recipes including strawberry cake and peanut brittle), John Wayne (egg and cheese casserole), Robert Redford (whole wheat bread), President Ronald Reagan (sweet-and-sour salad dressing, and veal scaloppine), and Walter Cronkite (meat loaf). Some of those who responded didn’t have a recipe to give her, but replied with greetings instead. George Burns sent in a tip “if there’s ketchup on the table, then I know the food is good”, and Pope John Paul II sent in a prayer. The book also included notes from David Bowie, the singer, and Mario Andretti, the sports car racer.

Q. I LOST my recipe for John Wayne Casserole. It’s a side dish made with two kinds of cheese and eggs and canned green chili peppers, and I used to serve it with barbecue. Do you think you can find the recipe?
A. I HAVE no idea why this casserole is named after the Duke, or where it came from originally. But enjoy.

Butter a 2-quart, oven-proof casserole dish. Preheat oven to 350 degrees. Toss the chilies with the cheeses and place into dish. Combine the egg yolks, evaporated milk, flour and salt and cayenne, and beat thoroughly. Whip the egg whites until stiff and fold into the yolk mixture. Pour over cheese mixture in dish and pierce with fork to allow liquid to absorb into cheese. Bake 40 minutes. Place tomato slices in a layer on top and bake an additional 10 minutes. Serves 8 to 10.

John Wayne Casserole – named after the famous movie star – can take top billing at any dinner table. The John Wayne Casserole was the request of a reader from St. Michael’s, Md., who had lost the recipe. The same responses came from Sue Gill of Stewartstown, Pa., Charlotte Logan, no address, and Joan C. Johnstone of St. Michael’s whose recipe came from “my daughter-in-law who lives in Albuquerque, N.M.”

Using a rubber spatula, gently fold beaten whites into egg yolk mixture. Pour this mixture over cheese in casserole and, using a fork, help it “ooze” through the cheese. Bake 30 minutes and remove from oven and arrange sliced tomatoes, overlapping around the edge of casserole.

Bake 30 minutes longer or until a silver knife inserted in center comes out clean. Garnish with a sprinkling of chopped green chilies if desired. Makes six to eight servings. 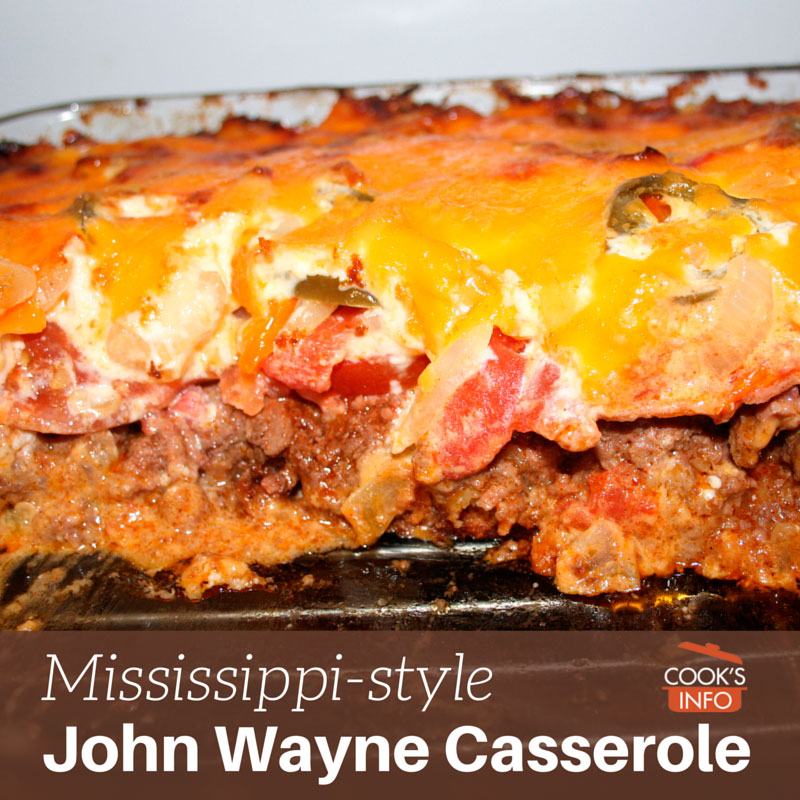 Brown ground beef and add taco seasoning and water, according to packet instructions, and set aside. In a separate bowl, combine sour cream, mayonnaise, 4 ounces of cheddar cheese, and half of onions, and set aside. Stir biscuit mix and water (directions on box) to form soft dough. Pat dough on bottom and one-half-inch up the sides of an 11×17-inch greased casserole dish. Saute remaining onions and bell peppers until slightly tender. On top of biscuit mix, evenly distribute ingredients in the following order: ground beef, tomato slices, green peppers, onions, jalapeno peppers, sour cream mixture and end with remaining shredded cheese. Bake in 325-degree oven for 30-40 minutes or until edges of dough are lightly browned.