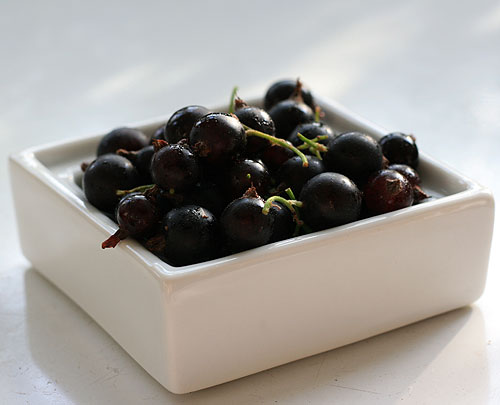 Jostaberries are a cross between black currants and gooseberries.

The Jostaberry’s thornless bushes reach 1 1/2 metres (5 feet) in their second year, and can grow beyond that up to 2 1/2 metres (8 feet) tall. They are more bushlike than gooseberries or currants, have glossy leaves and are very cold hardy. They are, however, still vulnerable to the same insect pest, sawfly, that gooseberries are.

The best yields are achieved in areas where summers are cool. They won’t produce much fruit in hot summers, and don’t grow overly well in California, USA as the summers there are too warm, and the bushes prefer a cold winter.

Sometimes, the Jostaberry bushes won’t bear good quantities of fruit until they are 4 or 5 years old. Many people give up on their bushes.

Even though Jostaberry bushes can pollinate themselves, some feel that the best yields are obtained when a black bush and a red bush are present in the same garden for cross-pollination.

Jostaberries are ready for picking in July. For the best flavour, they are best left to ripen until they are as dark as that variety will get before picking. They will have a mild black currant flavour, and be sweet with a tangy tartness.

Birds love the Jostaberries, so many home gardeners net the bush as the berries appear.

Each bush will yield about 5 kg (11 pounds) of berries.

There are very few commercial growers.

Both ends of the berry (stem end and blossom end) need to be trimmed if not being juiced.

The Jostaberry was developed from a cross done in Germany over a period of time between the 1930s and 1950s.