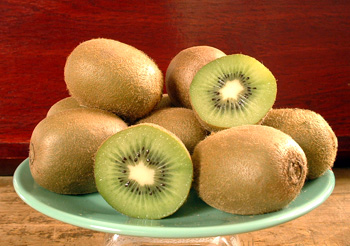 Kiwi is a fruit that grows on a woody vine and has a hairy, brown skin. But inside, when sliced, it has a striking green flesh surrounding a ring of small black seeds.

Everything inside, including the seeds, is edible. The rough kiwi skin is actually edible, too: it has a slightly bitter, lemony taste.

The New Zealand season for growing iiwi is exactly opposite that of California’s; the result is that, in tandem with each other, the two growing sources are able to keep North America supplied with Kiwi year round.

New Zealand has developed a new variety of Kiwi, ZESPRI™ Gold which has yellow-coloured flesh inside, and a hairless brown skin.

If you are just eating a Kiwi yourself (as opposed to slicing it for a salad, say), there is no need to peel it. Just cut it in half, and eat it just as you would a boiled egg, using a spoon.

Very rich in vitamin C. The skin is rich in fibre and anti-oxidants.

In June 2004, scientists at Southampton University, England, found that some children under 6 can have allergic reactions to Kiwi fruit.

Native to the Yangtze Valley in China, where it is called “Yang Tao”, it was never actually cultivated until a British botanist brought some samples to the west in 1900. By 1906, New Zealand began growing them as a commercial crop.

First become popular in North America starting in the early 1960s in California. It was called a Chinese Gooseberry at the time, but was then renamed Kiwi after the bird because of the fruit’s brown skin. The change of name was a marketing ploy, but it worked, and sales of the fruit skyrocketed.

By the mid 1980s, Kiwi had become the hot food item in both North America and the UK.