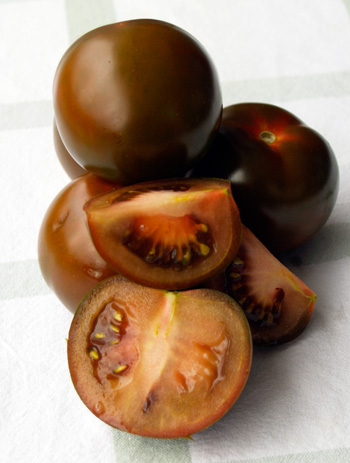 Kumato Tomatoes are described as black, but they are actually more of a dark brown.

The tomato was developed over six years by Damien Flores, a Spanish grower in Aguilas, southern Spain (100 km from Murcia) for Syngenta Seeds Europe.

The company was looking for a tomato that would grow in salty soil. According to marketers’ press releases, the tomato was developed from a variety from the Galapagos Islands. However, there are actually no black tomatoes in the Galapagos Islands. Syngenta may have used some tomatoes from the Galapagos, which are “Lycopersicon cheesmanii”, in the cross-breeding that was done, but those tomatoes are not black — the black actually comes from tomatoes that have been in Europe for hundreds of years, through selection.

Kumato seed is not available on the retail market to home gardeners; it is only available to commercial producers, and Syngenta has said it will not be released to the public.

Kumato is the black tomato that has received the most press to date (2007), perhaps because it was the first to be sold commercially.

Kumato Tomatoes were trialed in Sainsbury’s stores in the UK in spring 2004.

This web site generates income from affiliated links and ads at no cost to you to fund continued research · Information on this site is Copyright © 2022· Feel free to cite correctly, but copying whole pages for your website is content theft and will be DCMA'd.
Tagged With: Black Tomatoes