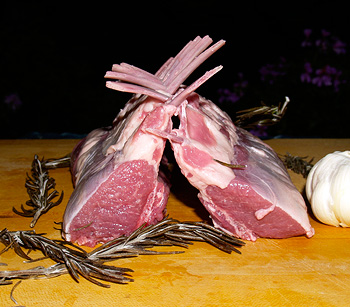 Lamb Guard of Honour is a fancy way of presenting a Rack of Lamb.

It is composed of two racks of Lamb (aka Best Ends) tied side to side, with the bones arching inwards to each other (e.g. interlaced) to form an arch.

Some butchers will have a few already assembled for sale; others will do it for you, or you can do it yourself at home.

The rib ends are often Frenched to make the interlacing easier, and for more dramatic effect.

You can stuff the space that’s created between them. It is very easy to carve, so it is usually carved at the table.

Remove the string as the first part of carving.

Named after the effect of an honour guard on either side of a walkway raising their rifles to each other to form an arch.