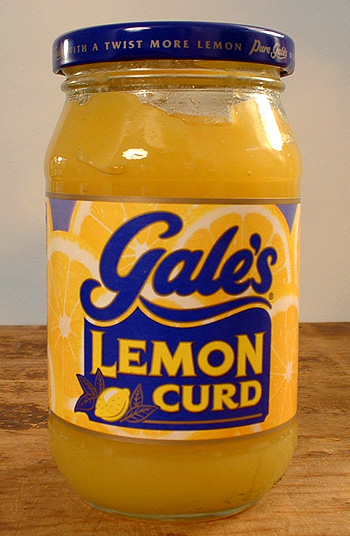 Lemon Curd is made of sugar (you don’t want to know how much), butter, eggs, and lemon juice and zest. It’s almost like Lemon Pie Filling, except because it doesn’t use a powdered thickener such as cornstarch, it is less jelly-like.

It is thick and spreadable, and a light to medium yellow colour.

It’s usually described as a custard flavoured with lemon. You can also buy (or make) Orange Curd or Lime Curd.

You can use it as a filling or topping for baked goods (good as a topping for a plain cheesecake, for instance). It can be used as a filling for tarts, but it’s not quite firm enough to use for something bigger such as a pie — use Lemon Pie Filling instead for that. It is also spread at the table on buns, muffins, scones or toast.

As of 2004, Gales Lemon Curd has been made by Premier Foods in Histon, Cambridgeshire (currrent as of 2006). Previously, it was made in in Hadfield, near Glossop, Derbyshire.

This web site generates income from affiliated links and ads at no cost to you to fund continued research · Information on this site is Copyright © 2022· Feel free to cite correctly, but copying whole pages for your website is content theft and will be DCMA'd.
Tagged With: British Food, Desserts