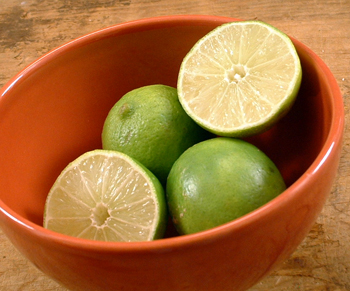 A Lime tree is a small evergreen tree about 8 feet tall (2 ½ metres) that blooms with small, white flowers. While lemons will grow in some warmer climates, Limes will definitely only grow in the tropics.

There are two main varieties of Limes, Persian Limes and Mexican Limes.

Mexican Limes are also called “Key Limes.” Though Persian Limes look more promising, because they are bigger, their juice is not as flavourful as Mexican Limes.

Limes are picked when they are fully grown, but still green and unripe. If Limes are allowed to fully ripen on the tree, they actually turn from green to yellow. Because of this, some people believe (erroneously) that Limes are just unripe Lemons. Whereas, truth to tell, even the Lemons that we buy are unripe Lemons.

Limes have more sugar and citric acid than do lemons.

Choose Limes that are heavy for their size. Small brown russet patches on the skin don’t affect the quality of the juice inside.

Store in fridge for up to two weeks in a plastic bag to help slow down their drying out. 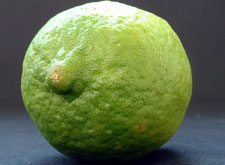 Limes are native to the East Indies. They were brought to the Mediterranean by the Arabs, to the New World by the Spaniards, and up to California from Mexico.

In the Middle Ages, Lemons and Limes were mixed up in people’s minds.

Limes were distributed as part of rations to sailors in the British Navy to prevent scurvy — thus their nickname “Limeys”. The British Navy got their Limes in the West Indies.

The Limehouse basin and docks in London don’t take their names from fruit Limes, but rather from kilns there in the 1300s that produced Quicklime for mortar.

The name probably comes from the Arabic word for lemon, “limun”.