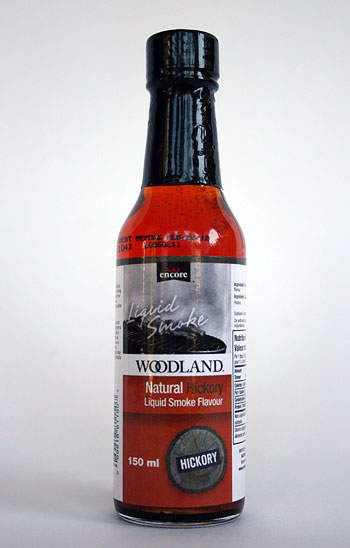 Liquid Smoke is a seasoning liquid that adds a smoky flavour to food.

Wood chips or sawdust, often from hickory, is burnt to produce smoke; the smoke is captured in water. Other woods used include apple, mesquite, and pecan.

Some of the better brands contain just water and smoke concentrate. Other brands contain water, smoke flavour and other ingredients such as vinegar, molasses, caramel or caramel colour, salt, spices, sugar and vegetable protein.

Liquid Smoke is used a lot commercially, especially in making smoked meats such as bacons. Some manufacturers offer commercial buyers the option of purchasing their liquid smoke in water, in oil-based liquids, or in powder form.

Use sparingly as it’s very easy to use too much. Use just a very drops — seriously, just 2 or 3 drops. For flavouring a large quantity of meat, 1 teaspoon will flavour 5 pounds of meat (2 kg).

If you get any on your hands, they will smell for days as though you just came in from a campfire.

Some people suspect that Liquid Smoke is carcinogenic. You have to remember, though, that at one time, things as diverse as apples and the interior smell of a new car were also labelled carcinogenic.

The European Union is currently doing its own study on the safety on liquid smoke (2004).

Some wonder if, because of its association in cooking with meat, whether Liquid Smoke is vegetarian. Yes, it is.

Store after opening at room temperature for 2 to 4 years.

Liquid smoke is not a new product: witness this advertisement from 1919, which also claimed preservative properties: “Smoke Your Meat the New Way Cheaper — Quicker — Better. Wright’s Condensed Smoke or Liquid Smoke Smokes All Kinds of Meat. Yet gives it the same delicious flavor much desired in home-smoked meat. Wright Condensed Smoke keeps the meat solid and sweet indefinitely. You can smoke your meat — either beef or pork — by simply applying Liquid Smoke with a brush. It imparts to the meat the same smoke flavor that is obtained when meat is smoked over a fire, in the ‘old fashioned way.’ It preserves [sic] the meat so that it keeps solid and sweet as the ‘old fashioned way.’ Its [sic] cheaper because, one dollar size bottle will smoke a barrel of meat. Its quicker, because there’s no smoke house needed. Simply take time to apply with a brush. Is fine in cooking beans, cabbage, fried eggs, or anything where the flavor of smoked meat is desirable. One bottle smokes a whole barrel of meat. Price $1.” — Advertisement in The Decatur Daily Review. Decatur, Illinois. Thursday, 23 January 1919. Evening Edition. Page 8.

“Same firm [E. H. Wright Company] offers a bottle of smoke. Yes, smoke condensed from choice hardwood and put into liquid form, nothing added. The principal use of this product for many years was by farmers for smoking hams and bacon. But with the popularity of the backyard barbecue and of oven-barbecued food, people everywhere are buying smoke to dash over meat. It’s easy to use and inexpensive.”