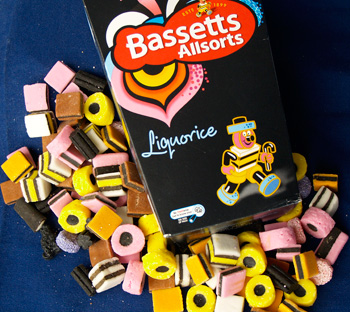 Contents hide
Liquorice Allsorts is a candy mixture. On average, there are about 10 different types of candies in an all-sorts mixture, depending on which brand you buy. Some of the candies in the mix are pure liquorice, others are constructed from both liquorice and paste (fondant) candy. Some are circular with coconut, some are layered squares, etc.

Everyone has their favourites in the bag, and sometimes you can every buy bags of just the one type that is your favourite. The rosette shaped one, which is pure liquorice with no paste, is the one most likely not to get eaten.

Everyone who likes them has a brand that for them is “definitive.” Bassetts is the original and the brand that some people consider the best. You can also now buy “Fruit Allsorts”, in which the layers that would have been liquorice are fruity-flavoured instead.

Allsorts were introduced by the candy firm Bassetts in England in 1899. 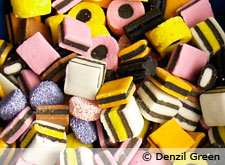 The story goes, (and it is probably myth, but who can be a stickler when it comes to a fun topic like Liquorice Allsorts) that a salesman was carrying around various sorts of candies to deliver had a mishap that caused them all to get mixed up.

The customer asked him what kind of candies these were, and the salesman replied stoically, “All sorts, by the look of it!”

The mixture proved popular, the shopkeeper ordered more, and the new product took off.

This web site generates income from affiliated links and ads at no cost to you to fund continued research · Information on this site is Copyright © 2022· Feel free to cite correctly, but copying whole pages for your website is content theft and will be DCMA'd.
Tagged With: British Food, English Food, Liquorice