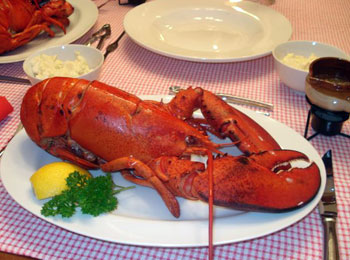 Male Lobsters will have thick small fins on their abdomens, while females will have finer, thinner ones. Female Lobsters have a bit more meat, and some people feel that they are often somewhat sweeter and juicier than male Lobsters. While that may be largely subjective, female Lobsters do often, however, have in them red eggs, which some people like. This is called either the “roe” or the “coral.” It turns orange when cooked.

The green stuff inside is called the “tomalley.” It’s the same as the “mustard” of a crab; it’s the Lobster’s digestive system. Zealous Lobster fans relish its very rich flavour. Like a crab though, eating it may be less and less a good idea, as any pollution in what the Lobster has eaten will be concentrated in there.

Lobsters have eyes but really can’t see, and clear blood that turns white when cooked. They have one very large claw, the “crusher”, and one smaller one, “the pincer.” Both can be referred to collectively as “chelipeds.”

The claws are connected to the body via the “knuckles.” The meat in the knuckles is very sweet. Most of the meat, however, is in the tail. The carcass, what’s left when the claws and tail are removed, is also called the “carapace.” The only things edible from the carcass are the roe, the “tomalley”, and the meat inside the walking legs. The meat inside these is very good. It needs to be sucked or squeezed out.

A “cull” is a Lobster that just has one claw (meaning the other one has been lost somehow, either before being caught or after.)

In America, Lobsters are labelled according to size:

You can also buy cooked Lobster meat separately, but it is more expensive.

When a Lobster is being purchased, it should put up a fight when it is taken from the water. Choose ones whose tail is still tightly curled under. Ones that have relaxed tails, or that just move a little bit, are on their last legs, as it were (which is fine, but it means you need to get them straight home and shorten the poor little blighters’ life spans even further.) Buy them the day you are going to use them, or at the very most, a day and a half ahead.

Even though the claws on live Lobsters are usually fastened with a rubber band, sometimes the rubber bands do come loose. Pick them up in such a way that their claws can’t get you.

Putting a Lobster in any kind of non-seawater will kill them right away. Don’t store them directly on ice (as any ice you’re likely to have will be made of fresh water), but storing them near a bag of ice is fine. The best thing, though, is to put them in the fridge wrapped in wet newspaper or paper towel. Wrap each separately, or they may fight.

Check on them frequently. If any stop responding to being poked or prodded, or respond only very little, then they have almost had it. Cook them on the spot.

Handle carefully. Never stick your hand right into a bag of live Lobsters or you have no one to blame but yourself for creating a Kodak moment in your kitchen. 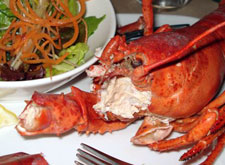 Each Lobster will give you 25% meat at the most; the rest is waste. Cooked Lobster meat turns opaque.

If meat from a cooked Lobster isn’t firm, don’t eat it: it means the Lobster was dead too long before being cooked.

Turn the cooked Lobster on its back. Pull off the tail. Split the body down the centre with a knife.

Discard the black vein & small sac at the base of the head.

Take out the green tomalley and roe, if any. Remove white meat.

Crack claws and knuckles and eat meat. Remove legs and suck meat out.

There are many opinions on the order in which the above steps should be performed.

See Other Entries below for separate entry on Spiny Lobster.

Consequently, though Canadian Lobster is now being sold in the UK (2003), most cooks there advise against buying it.

“Lobster Boils” are informal but lavish feasts held in late summer up and down the eastern seaboard of North America. Though lobster is the centrepiece of the meal, other seafood such as clams and mussels is usually served as well. Many are annual gatherings of friends and family.

These Lobsters are also called “Brittany Blue Lobster” because their shells are tinged with blue. They are far more flavourful than most other Lobster. Connoisseurs who’ve had them will often only settle for the Breton afterwards. This Lobster shouldn’t be confused with “Cape Breton Lobster” (see North American Lobster above.)

Bring salted water to a boil. You need lots of water; the Lobsters will need to be fully covered by it. Add about 1 teaspoon of salt per quart / litre of water.

If you have kitchen scales, they’ll come in handy now. Weigh each Lobster, and plan to cook according to the following guide:

Lower the Lobsters into the boiling water head first. The Lobster’s shell will turn red the second it hits boiling water. Cover the pot, return the water to the boil, and simmer. Start your cooking time count from when the water returns to the simmer. Don’t overcook, or the meat will toughen.

When done, remove from the water. With a skewer or tip of a knife, punch a hole between its eyes, tip the Lobster over the sink, and let liquids drain out. Serve.

Instead of boiling, you can steam for same time lengths above. Lobster doesn’t broil or grill well: it’s too dry.

If you cleaned the meat out of a Lobster in the kitchen, don’t discard the shells: freeze them for fish stock.

If you have any qualms about dumping the live Lobster into boiling water, a more humane method is now being suggested of freezing them first. You pop the live Lobsters into the freezer until there is no movement from them when poked. This may take up to 1 ½ hours, but don’t leave them in there longer than 2 hours. This also is considered a “humane” way of killing them, because — or so the theory goes — they painlessly slide into unconsciousness.

To broil, wash live Lobster under running cold water. While Lobster is still alive, use a large French knife to split it lengthwise down the middle. Douse each half with some white wine and melted butter, and cook several inches below broiler / grill until done.

You can freeze Lobster for up to 4 months. Pop them in the freezer live (sic).

Lobsters used to be considered poor people’s food. They’d just be used as fertilizer and bait. Now, they are always seen as a luxury food.

Lobster Newberg was reputedly invented by Charles Ranhofer (1836 to 1898) in New York, while he was chef at Delmonico’s restaurant from 1862 until 1896.

“…These dishes can, of course, also be done with prawns, or with the cheaper, frozen Canadian Lobster, which is finding its way more and more into the shops in this country. You can always tell a Canadian Lobster because its head is a different colour red, a more brick red, and it has a triangular shape rather like an old flinthead arrow. If people try to sell these to you as British Lobsters, get extremely stroppy with them indeed, because they are not the same thing and should not be charged at the same price.” — Clarissa Dickson Wright, “Two Fat Ladies Obsessions”, 1999.

“Please don’t ever waste your money on Canadian Lobster — the flavour is as elusive as a check-out packer on a Saturday morning…. Unfortunately, Canadian Lobsters don’t look very different from British Lobsters, although the colour is perhaps a little darker red (when cooked), and the shell is slightly more plastic-looking.” — Ruth Watson, The Really Helpful Cookbook, 2000.

“I rang Roy Brett, who used to work for Mr Stein in Cornwall and now runs the lovely new fish restaurant in Edinburgh, Ondine. He said he wouldn’t have Canadian lobster in his kitchen. “The difference between them and British lobster is night and day — I’ve tried cooking them and it’s like eating plastic. Interestingly, I get American and Canadian customers in here, and they try our Eyemouth lobster and say that they’ve never tasted lobsters anything like it or as good.”” — Renton, Alex. It’s wrong to charge only £3 for lobster. London: The Times. 13 May 2010.

“Live lobsters hermetically scaled into cans will soon be traveling to kitchen doors by express and by air. A method has been developed by the Live-Pak Seafoods, Inc., of Boston, Massachusetts, for keeping canned lobster in perfect condition for six days to two weeks. The cans contain a treated water plus oxygen and a material to absorb the waste product. During shipment the lobsters must be kept at forty degrees Fahrenheit to slow down metabolism and the oxygen requirements.

We read about live lobsters in tins and immediately ordered a sampling. Came a 30-pound box, lined in a shock-absorbing paper, two cans, each holding two medium-sized lobsters with two extra cans in the box, these scaled with a refrigerant. When the tins were opened, the lobsters seemed sluggish but a few moments later were traveling in a hurry down the kitchen table with every intent of going back to the sea. They cooked sweet, with a flavor reminiscent of lobster we have eaten at down Boat beach parties, fresh-trapped beauties boiled in sea water over a bed of spruce coals.” — Paddleford, Clementine (1898 – 1967). Food Flashes Column. Gourmet Magazine. August 1950.

This web site generates income from affiliated links and ads at no cost to you to fund continued research · Information on this site is Copyright © 2022· Feel free to cite correctly, but copying whole pages for your website is content theft and will be DCMA'd.
Tagged With: Crustaceans