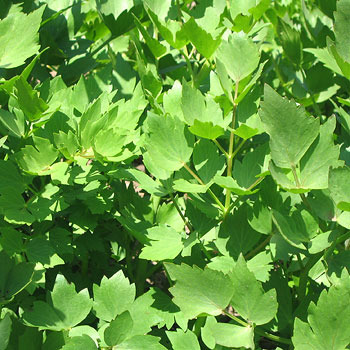 Lovage is a perennial herb that can grow 1 ½ to 1 ¾ metres (5 to 6 feet tall) in a clump. It’s related to carrots, celery and parsley. It produces flowers that look like other members of the family, Queen Anne’s Lace and Cow Parsley, except its flowers are yellow instead of white.

The green leaves and stalks have a flavour that is like that of celery.

The seeds can be used as celery seed in cooking.

Lovage is not really sold anymore, as it is out of fashion. You pretty much have to grow it yourself.

Lovage can be chopped and added fresh to salads, or used in cooked dishes, though add at the last minute, as prolonged cooking destroys the flavour. The stalks will retain their flavour longer in cooking than the leaves will. It has even more of a celery taste than even celery does, so use it sparingly at first till you get used to it.

Some people feel that lovage can be used in cooking to give a flavour similar to what Maggi sauce would.

Does not dry well; freeze instead.

The Romans and Ancient Greeks used Lovage a great deal. They would chew the seeds (they felt the seeds helped them to digest their foods) and candy the stems. The Romans brought it to Britain, where it now grows wild.

Lovage dug up at night on Good Friday would reputedly help ward off either witches or the influence of the Devil.

The Greeks called it “ligustikon”, the Romans called it “Ligusticum” and later “Levisticum”. Levisticum evolved into “luvesche” in Old French, which was borrowed into Middle English as “loveache”, which was re-spelled to become “lovage”. There is, despite all the fond fables and superstitions, no association with the word “love”.

Many European names bear some relation to the Latin “Levisticum”: Levistico (Italian and Spanish); Livèche (French); leuştean (Romanian); lavas (Dutch). The German of “Liebstöckel” (“love stock”) as the same “love” aspect to it as the English name does.

Some people think that lovage is the same plant as smallage, but it is not: smallage is Apium graveolens L.