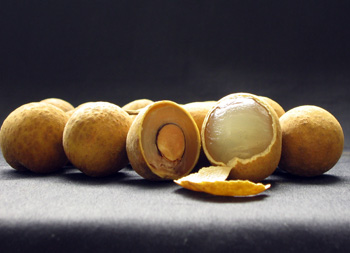 Lychee fruit trees will not reproduce true to seed. They must be propagated by grafting. They grow slowly to a maximum height of about 40 feet (12 metres.) Evergreen, their leathery leaves start off red and turn bright green when the trees are older.

The trees blossom with yellowish green flowers in clusters; fruit is ready to harvest about 140 days after the trees flower.

The fruit is round and plump, though quite small at only about 1 to 1 1/2 inches wide (2.5 to 4 cm.) It has a thin, rough, rind that is brittle though it feels somewhat leathery. It is often referred to as the “shell.” On most varieties the skin is reddish, though on a few varieties it can be greenish-yellow. The rind is not edible.

Inside the fruit, juicy, pale, sweet flesh surrounds a large stone in the middle. The stone is not edible.

The fruit is available fresh in the fall, and canned in syrup or water at other times of the year.

Fresh Lychee Fruit still in their skin will explode if you throw them onto a fire.

Lychee Nut is not the stone inside the fruit; instead, it refers to the whole, dried fruit. The white flesh inside turns chewy brown when dried. Watch out for the inedible stone still inside as you bite into the fruit.

Don’t eat the seed; it contains hypoglycins, which are toxic.

Store fresh Lychees at room temperature for up to 3 days, or in fridge for up to 5 days.

Store dried Lychees at room temperature for up to a year.

Native to Southern China. Brought to Hawaii in 1873, Florida in 1883, California in 1897. Some farmers in Florida switched to growing Lychees after Hurricane Andrew in 1992, with the result that Florida is now (as of 2003) producing about 2 million pounds of Lychees per year.

“The fresh lychee of the Orient is selling by mail, for the first time available to the American public, a rare and luscious surprise. This fruit so highly esteemed by the Chinese is too fragile for import and heretofore it’s come only in the dried state, the so-called lychee nut of the thin, brittle brown shell, the center like a soft prune, with a hard black stone.

The fresh lychee is quite a different treat, one of the most delicious morsels one can conceive when in a perfectly ripe state. Its color, size, and form are like a large red strawberry’s, the thin, tough outer skin can be slipped off between thumb and finger just before eating. A fruit high in sugar, cool-tasting, with a delightful, slightly acid tang. In a word, unique.

The fresh lychee must be cared for like any semiperishable fruit. It is picked tree-ripened and shipped parcel post special delivery to arrive still wearing its strawberry blush, which is held several days before the skin starts to brown. The fruit will keep nicely in the refrigerator for two to three weeks. It grows in clusters on the limb tips of evergreen trees that may reach the height of forty feet, trees indigenous to southeastern China where the climate is very much like that of central and southern Florida. It is only recently that lychee orchards are being started in this country, and the harvest so far is limited. Previously, the small quantity of fruit available has gone to the Chinese in northern cities. Now for the first time, the fruit is offered to the general public in June only.” — Paddleford, Clementine (1898 – 1967). Food Flashes Column. Gourmet Magazine. June 1950.

This web site generates income from affiliated links and ads at no cost to you to fund continued research · Information on this site is Copyright © 2021· Feel free to cite correctly, but copying whole pages for your website is content theft and will be DCMA'd.
Tagged With: Asian Food, Chinese Food