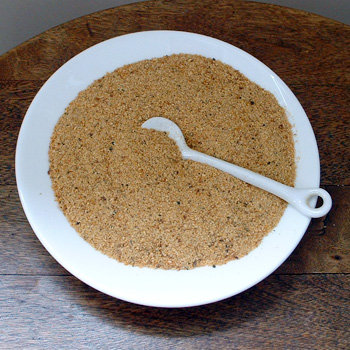 Mace has a flavour like nutmeg, because it is made from the same “seed” or “nut.”

Mace is made from the fibre that coats a nutmeg seed. The fibre is reddish-purple and pliable, but turns brown and brittle when dried. One hundred pounds (45 kg) of “unpeeled” nutmeg seeds will yield only 1 pound of mace (450g.) For this reason, it’s more expensive than nutmeg.

Pieces of Mace are called “blades.” They are usually sold already ground now, because it is very hard to grind them finely at home.

Mace has a more pronounced flavour than nutmeg, and a lighter colour. Owing to its lighter colour, it’s a good way to sneak a nutmeg taste into dishes where you wouldn’t want the dark specks of nutmeg showing.

In the UK, it is often used in potted meats and in sausages.

Here’s an example from 1906 of a blade of mace being used in a pickling mixture:

“During the interval, place over the fire in a saucepan one quart of vinegar, three tablespoonfuls of brown sugar, two cloves of bruised garlic, one bay leaf, one onion cut in slices, one sprig of thyme, one blade of mace, twelve whole cloves and the same of allspice, a tablespoonful of celery seed. Cover the kettle closely and cook for 30 minutes, letting it stand until cold and then straining through a jellybag.” — Making Sweet Pepper Relish. Chicago, Illinois: Prairie Farmer. 20 September 1906. Page 15.