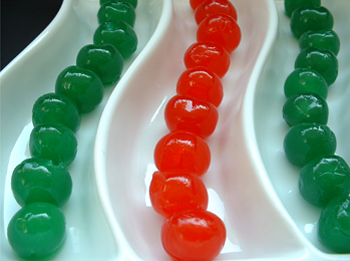 Maraschino cherries are cherries that are dyed a bright red or a bright green, and packed in a syrup of sugar.

To make maraschino cherries, fresh cherries are soaked in brine to firm them up, then soaked in fresh water. After that they are coloured, flavoured, and put into a sugar sauce. Almond flavouring (usually bitter almond oil) is used for the cherries that have been coloured red; mint is sometimes used for the green ones, though almond is used as well. The cherries are generally pasteurized to give them a shelf life of 3 to 5 years.

Maraschinos can be purchased with or without stems. The ones with the stems have usually been hand-picked to preserve the stem, for use in fancy drinks.

Maraschino liqueur is made from marasca cherries. The pits are used as well, to give the liqueur a hint of bitter almond flavour. It is then distilled, mixed with sugar cane syrup, aged and filtered. The finished, clear liqueur is much “drier” than the juice from a bottle of Maraschino Cherries, or other cherry liqueurs.

Before all this processing starts, the maraschino is actually a sour cherry. Most North American maraschino cherries are made from Royal Ann cherries (aka Napoleon Cherries).

Typically you cut maraschino cherries in half for most recipes. Leave them whole for use in cocktails.

You may have heard that the dyes used to make maraschino cherries were harmful: they were, but use of those dyes has now been banned and new ones have been found.

Maraschino cherries originally came only from the area that was formerly Yugoslavia and Northern Italy. The variety used was a sour one called “marasca”, which grows in the Dalmatian mountains. They were preserved in a liqueur called “Maraschino”, which is also made from the same cherry, and dyed a deeper red. When export of these cherries began to the US in the 1890s, they were an expensive delicacy that you would be served in the finest hotels and restaurants.

By the 1920s, savvy American producers had come up with an American version, using different cherries (such as the Royal Ann), and substituting almond oil for the liqueur. They were sold as imitation maraschino cherries, but by the 1940s, the American Food and Drug Administration (FDA) in America had conceded that cherries prepared in this way were now “maraschino cherries” in the minds of American consumers.

This web site generates income from affiliated links and ads at no cost to you to fund continued research · Information on this site is Copyright © 2023· Feel free to cite correctly, but copying whole pages for your website is content theft and will be DCMA'd.
Tagged With: Candied Fruit, Royal Anne Cherries