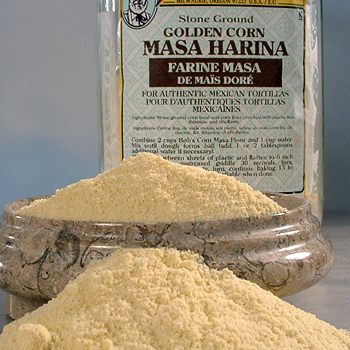 Masa Harina is a Mexican corn flour made from either yellow or white “dent” corn. The name means “dough flour.”

The flour is used to make dough, which the Mexicans call “masa.” In Spanish, “masa” means “dough”, though in Mexican Spanish, it implies “dough made from corn.”

Masa Harina is a fast way of making “masa”, compared to the traditional way has you soaking and grinding corn kernels yourself.

The masa dough, whether made through the flour or from scratch, can be used to make corn tortillas, tamales, chalupas, etc.

Masa Harina is very different from cornmeal. It is much finer, with a very different taste owing to the processing methods. It is what gives corn tortilla chips their distinctive taste.

To make Masa Harina, the corn kernels are removed from the cobs, dried, then are soaked in water with lime (the chemical) or lye until the skins on the kernels loosen and can be easily removed. The kernels are then mashed, dried, and ground into flour.

Many people swear by the brand name of Maseca, and it is commonly used every day by millions of Mexicans. In fact, the Maseca company receives hundreds of millions of dollars every year to keep the price down for consumers from CONASUPO (the Mexican government’s agency in charge of commodity distribution.) It became somewhat of a scandal: some sources maintained that by 1994, Maseca actually got 43% of its revenue from subsidies. 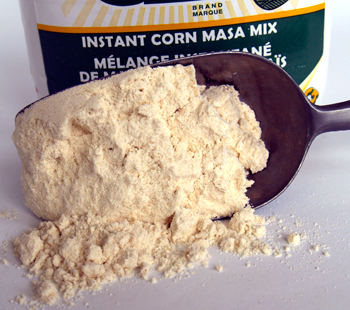 Masa Harina is actually more nutritious than cornmeal because of the corn being treated with lime water. See Nutrition in Corn entry.

This web site generates income from affiliated links and ads at no cost to you to fund continued research · Information on this site is Copyright © 2022· Feel free to cite correctly, but copying whole pages for your website is content theft and will be DCMA'd.
Tagged With: Cornmeal, Mexican Food