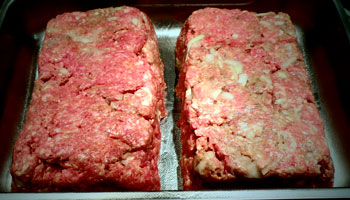 Poor Meatloaves — who ever thinks to take pictures of them? When was the last time you saw one featured in a four-page food magazine spread-out?

Meatloaf is ground meat, with a binder such as egg and a starch such as bread or cracker crumbs, along with chopped vegetable and seasonings, formed into a loaf shape (usually), then baked. Many recipes for Meatloaves can also be fried as meat balls.

Everyone’s idea of Meatloaf is different and there is no one right version. Everyone has a secret to making good Meatloaf, or a tip to give. If you try to advocate a best recipe for it, or a best style for it, you’re asking for trouble. It’s better to treat the word as a “category” of food, just as “pie” is.

Meatloaves are a North American version of European forcemeats, rissoles, polpettone, or pâté de campagne (Country Pate.) The meat and ingredients are left somewhat coarser than they would be for pâtés or forcemeats, nor are they as highly spiced as in pâtés.

They were first popularized in North America, and are now known and made in New Zealand and Australia. It is so at home there that most people there would never think of it as North American. Meatloaf recipes are appearing in the UK, but you will still get people there who just aren’t sure yet exactly what Meatloaf is. There’s actually a recipe called “English Meatloaf”, which would startle them. It’s actually an American recipe, which calls for rice in it (named, no doubt, for the famed rice paddies that surround the Houses of Parliament in London.) The French make something very like a Meatloaf except their version uses veal and only veal (along with sherry, cognac and mushrooms.) It is called “Pain de Veau.” But if any country has wholeheartedly embraced Meatloaf, it is America.

The meat is bound together with eggs and breadcrumbs. Updated recipes replace the breadcrumbs with crushed potato chips, crushed crackers, etc. Meatloaves are actually quite forgiving of almost everything except being overcooked.

It’s very hard to make a Meatloaf for a guest, as they are always going to compare it with their mother’s. So there’s no point in getting too fancy or straying too far from expectations. It’s meant to be comfort food, a food that someone is familiar with. Though no one in the food trade wants to acknowledge it, Meatloaf is still one of the most asked-for foods when people are eating out in North America,.

Meatloaf acquired a very bad reputation in the 1960s and 1970s. It got associated with leftovers and “mystery meat.” Too often, it was served overcooked, dry and grey and tough, with the weight of a brick. Part of the problem is that ground beef was getting leaner, and the older recipes were meant for fattier meat. 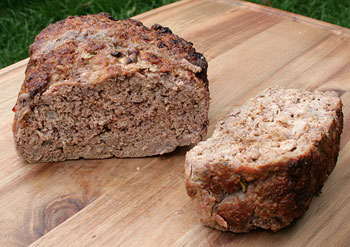 Some people prefer the end pieces, because they are crisper. The ends are best eaten warm, the softer middles are good cold for sandwiches. For many people, the best part of Meatloaf is leftover Meatloaf, that can be eaten the next day, cold and sliced, in sandwiches.

To make individual Meatloaves to freeze for quick meals, bake in muffin tins.

“Stuffed” Meatloaves have a layer of different ingredients in the middle. Vegetarian versions can be made from tofu and/or ground nuts. Kosher versions can also be made that omit any pork or dairy.

Meatloaves are sliced to serve. They are usually served hot with gravy. The gravy can be made from the Meatloaf drippings, from a package mix, or simply be tinned gravy heated and served.

Despite appearing to be a dead-easy meal, many people run into problems. Common problems include the Meatloaf being too greasy, too tough, being too crumbly and falling apart, burning on the bottom and being dry.

It’s a balancing act, though: if the Meatloaf is too moist, the loaf won’t hold together for slicing, it will crumble.

Meatloaf has usually made by most people entirely of ground beef. Ground beef comes in at the right price range for Meatloaf, which is meant on the whole to be an economical dish. Part of what makes a Meatloaf dry and tough, though, is using ground beef that is low in fat. Ground chuck, which is 15 – 20% fat, is considered by some to be the optimum ground beef for Meatloaf. Any leaner and you get a dry loaf, any fatter and you get a greasy loaf. Don’t use ground beef advertised as being extra-lean and expect a moist Meatloaf (unless of course you compensate for the missing fat). If you are baking a Meatloaf made with lean meat packed into a loaf pan, putting a strip of raw bacon in first before you add the meat will help prevent the Meatloaf from sticking to the bottom of the pan during baking.

Good Meatloaves, though, tend to combine at least two types of meat. Supermarkets and markets sell “meat loaf mix”, which is usually ½ lean ground beef, ¼ ground pork, ¼ ground veal. Aficionados recommend ⅓ beef, ⅓ pork, ⅓ veal. There’s nothing, however, to prevent the meat being or partially containing ground pork or turkey. The meat could also be ground veal or ground lamb, but those are more expensive in North America. If you have just read this and just have ground beef on hand, instead of rushing out to buy ground pork to combine with it, if you have any sausages to hand you can just open those up and use the meat inside them.

If you want a finer, denser meat loaf and have a meat grinder at home, pass your ground meat through the grinder to grind it more finely. Or, if you’re grinding your own from scratch, grind it twice.

Overmixing Meatloaf will make it tough. Never use a food processor (too easy to overmix), and don’t even think of using electric beaters: you will burn your engine out. Mix it by hand. The most fun part of making Meatloaf is when you have all the squidgy ingredients in a large bowl, and you get to use you bare hands to moosh and mix it all together. You don’t get to do that anymore at our ages. Mix just until combined.

Overcooking a Meatloaf also makes it tough. Do your Meatloaf a favour, use a meat thermometer and cook it till it’s the right temperature inside. That way, you won’t be tempted to overcook it. The United States Department of Agriculture recommends that beef, lamb, pork and veal mixtures be cooked to 160 F (71 C); turkey and chicken mixtures, to 165 F (74 C).

The traditional way of cooking a Meatloaf in North America has been to pack it into a loaf pan, the same kind of loaf pan as you would use for bread. Many people, though, especially aficionados, prefer free-formed loaves baked on a baking sheet or in a cast iron frying pan, but not touching the sides. This allows a crust to form on the outsides and bottom, which fans call “the bark”. If you want, you can pack it in a loaf pan to shape it, then turn it out onto a baking sheet.

Some people prefer to use special Meatloaf pans with racks in them that let the grease drain away down below. Some Meatloaves can be very greasy and the Meatloaves will swim in grease. In the traditional loaf pan, there is no where for the grease to go, which makes for a very soggy bottom. If you are using such a pan, pour off the grease periodically. Don’t, however, if your family prefers a soft-bottomed or soft-sided Meatloaf.

Cooking a free-formed Meatloaf on a rack, or on an upside down pan on a baking sheet, gives the grease somewhere to go and allows juices to collect to make gravy with.

After a Meatloaf is removed from the oven, don’t serve it right away. It needs to rest for a few minutes. This gives it a chance to reabsorb the juices back in. Let it rest on a rack, so that the juices can be absorbed, while any excess fat drains off. If you don’t give it this time, it will be drier and crumblier. The internal temperature will rise a little bit more as well while resting.

If you cooked your Meatloaf free-form, there will be juices in the pan to make gravy from. To make gravy, pour or syphon off excess grease and the proceed with your favourite way of making gravy.

A grated raw potato in the Meatloaf mixture can serve two purposes: it can be your starch, and it can help add moistness.

If you have Meatloaf sandwich fans in your house, consider doubling the recipe and making a second loaf reserved for sandwiches the next day.

Some people say that Meatloaf tastes better the next day, and not many Meatloaf fans would disagree with them. Overnighting in the fridge gives the flavours a chance to meld. You cook it one day, reheat and serve the next.

This web site generates income from affiliated links and ads at no cost to you to fund continued research · Information on this site is Copyright © 2023· Feel free to cite correctly, but copying whole pages for your website is content theft and will be DCMA'd.
Tagged With: American Food, Meat