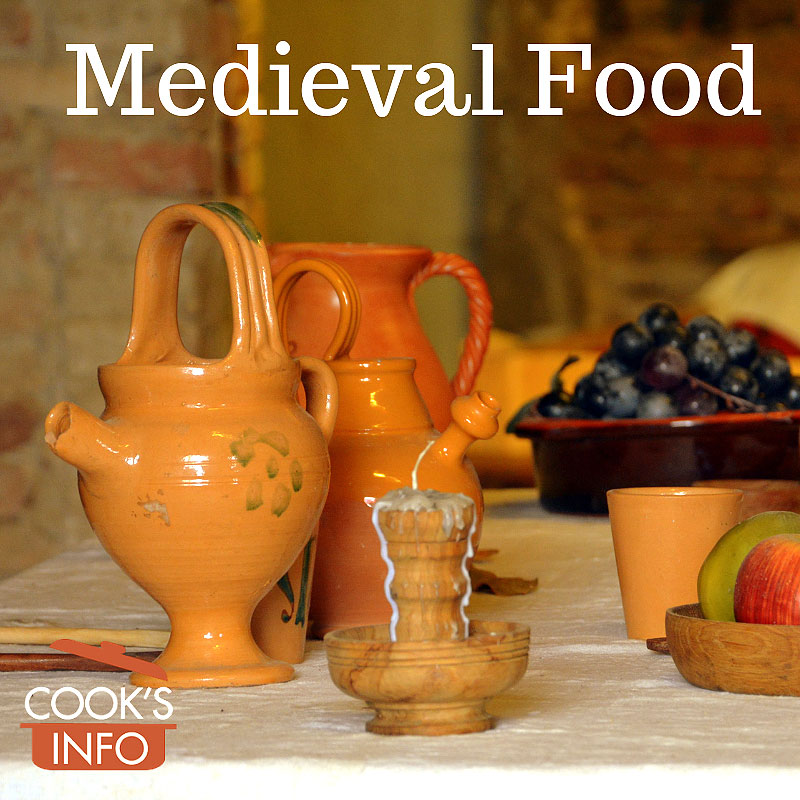 At some point in the early Middle Ages, as Germanic cultures prevailed over southern cultures, the rich abandoned the Greek and Roman custom of lying on sofas at banquets, and sat upright instead. This freed up the other hand for cutting and made more utensils possible. Impressing guests at banquets in the Middle Ages was based on how much food could be served. As the Renaissance began, this slowly changed into how artful the food was presented.

While many Roman citizens could have counted on access to wheat at least occasionally, common access to wheat hadn’t yet returned for ordinary people in the Middle Ages. Almost everyone except the very rich had to rely on barley as their staple grain, which would appear on the table at almost every meal where a grain was called for: in bread, porridge, soup, etc. Ordinary people had almost no diversity in their food. They would eat the same thing, day in and day out. The only variations that occurred would be based on what was available in a particular season. Only as the Middle Ages ended, and the Renaissance began, were new foods introduced for ordinary people: potatoes, tomatoes, corn, peas, artichokes, etc. People, though, were suspicious of these foods. Perhaps because, with many of the foods being completely “new” to the continent, there were no trusted, century-old sources saying how eating them would affect their balance of “humours.” In any event, people were slow to accept the new foods. The Italians were the most adventurous.

There is some debate about whether people did or didn’t drink water as a beverage. Certainly, routine, everyday easy access to known safe water hadn’t yet returned since Rome fell. And in the north of Europe, people drank beer that they made at home; in the south, wine. But a debate is now emerging as to the extent that people would also drink water straight up, by itself, as a beverage.

The medieval concept of healthy food

Medieval Food was obsessed with healthful eating, though the beliefs that guided cooking and eating are very different from the beliefs that underline today’s. The Ancient Greek belief in Dietetics, though it had held some influence in Rome, was zealously revived in the Middle Ages. The belief was that everyone’s body had 4 components (called “humours”), that everyone had a unique balance of these humours, and that what you ate or drank would affect the balance, either throwing off the balance and making you sick, or restoring the balance and making you better. See the Dietetics section in the entry on Ancient Greece for more information.

Rich people would have physicians who prescribed for them personalized, elaborate diets, and many “academics” wrote long tomes about the subject. Even the poor and illiterate, though, had a basic, folk understanding of the basic principles. These rules for healthy cooking dominated everything, and all food was judged within their context. Though the rules are very different from the rules prescribed today for healthy eating, the basic human behaviour is strikingly similar as people today turn away from one food item because authoritative sources say that it will raise cholesterol levels and then turn back to it when the authoritative sources change their minds and say it lowers it. Plus ça change…

In the Medieval understanding of healthy eating, what was good for one person was not necessarily good for another. Today, we have an objective sense, whether it is actually true or not, of certain foods being good for everyone — say, fresh citrus fruit or whole-grain bread (see entry on Whole Wheat Flour to understand why in fact it isn’t always.) In the Middle Ages, it was definitely believed that what might be right for one person — say white wine — would instead be deleterious for another, and that red wine would be better for their “humours.” 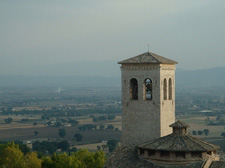 The other defining thing about Medieval Cooking was that, like Chinese cooking today, and Roman cooking before it, it combined sweet, sour, salty and pungent tastes. Like Roman food before it, Medieval Cooking didn’t make the clear distinction that we do now between sweet and savoury dishes. Meat was often mixed in with fruit. Why we don’t do this anymore today in the West, as Asians and Arabs, is because of the French Revolution. No, not the political one: the culinary one.

Though the taste for “sweet and sour” survives in Asian cooking, notably Chinese, the French cooking revolution that began in the 1600s eventually swept it from the kitchens of Europe. In English-speaking kitchens, it only survives in a few combinations such as applesauce with pork, mint sauce with lamb (which horrifies the French), and cranberry sauce with turkey (which some Brits even still look askance at.)

It’s a myth that Medieval food was highly spiced and flavoured to hide the taste and appearance of spoilt meat. The myth arose in the 1800s.

No sauce or spice will hide the taste of meat that has gone bad. Those who think that are the product of a society that has never tasted or smelled bad meat. Nor would people in the Middle Ages have thought of using a sauce for disguising the taste of something: instead, there were strict health rules about which sauces you served with which foods in order to “correct” the foods to be right for your body, according to the Humours theory that they cooked by.

If anyone is likely to have had spoilt meat, it would have been the poor. They wouldn’t have used spices, though: in those days spice were worth at least their weight in gold. Ordinary people couldn’t even afford to have salt in their household. The very rich, who could afford spices, wouldn’t have touched bad meat with a 10 foot pole. And even though the rich could afford spices, why would they have used something worth a king’s ransom on a rotten piece of meat that they could easily replace?

The rich had cooks, of course, and no cook would have wanted to risk his head by making his Lord or Lady sick by feeding them rotten meat. Many recipes surviving from the times, in fact, assumed you were going to kill what you were going to eat just before you cooked it: some recipes even started with directions for killing the chicken or cleaning the fish.

We, in fact, flavour a lot of meat nowadays. We smoke bacon, salt pork, serve fancy fillet steaks with fancy pepper sauces or soak them in marinades, and make corned beef. Someone 500 years from now may well assume that, owing to the primitive refrigeration we had in the 20th and 21st centuries, we did this to disguise the taste of bad meat. Their assumption would be just as logical, and just as flawed, as ours is about the Middle Ages.

We think that the Medieval idea of fresh was far from ours, because food that we would whistle into the refrigerator may have sat out unrefrigerated. You have to remember, though, that their kitchen and larder temperatures, not to mention the house temperatures in general, would have been far lower than ours, and probably very chilly indeed in the winter. Unrefrigerated items would consequently have kept longer than they would now in our overheated homes. And remember, too, that in England it’s still not general practice to refrigerate eggs, while some North Americans might toss out a dozen eggs if they have forgot it on the kitchen counter overnight.

This web site generates income from affiliated links and ads at no cost to you to fund continued research · Information on this site is Copyright © 2022· Feel free to cite correctly, but copying whole pages for your website is content theft and will be DCMA'd.
Tagged With: Medieval Food