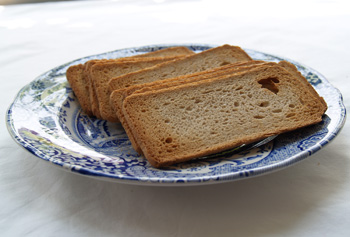 Melba Toast is a piece of bread toasted, then cut in half and toasted again so that it is very thin, brittle and crisp.

Melba Wafers were biscuits made in Australia by Swallow & Ariell in Melbourne Australia. They may no longer be in production.

To make, toast a piece of thin bread lightly. Remove from toaster and while still warm, slice it into two thin halves right down the middle — that is, split the piece of bread in two. With a knife, scrap off and discard all the loose doughy bread on both exposed sides. Toast the two pieces again just until the edges begin to curl. Watch it carefully, as it will burn quickly at this stage.

Melba Toast may have first been called “Toast Marie”. Georges Auguste Escoffier (1846 – 1935), was a friend of César Ritz, the hotel magnate. In the mid to late 1880s, he was chef at the Savoy in London and César Ritz was the manager (Ritz would open the Paris Ritz a year later, in 1898). César’s wife, Marie, was explaining how toast never seemed to be thin enough for her. Escoffier came up with what we now call Melba Toast for her.

In 1897, Nellie Melba was staying at the Savoy Hotel in London. She was apparently not feeling well (a diva’s prerogative, after all) and was on a diet that included toast. Escoffier presented her with “Toast Marie” to tempt the ailing diva to eat something. She loved it, and he renamed it after her. Marie Ritz didn’t appear to mind — after all, like her husband she was a businesswoman, too (she managed the Ritz in Paris after César died in 1918).

Nellie Melba (19 May 1861 – 23 February 1931) was an Australian opera diva. Her real name was Helen Porter Mitchell. She got her stage name of “Melba” from “Melbourne”, her home town in Australia. She was a superstar of her time; many other things were named after her, including Peach Melba. She began studying opera in Paris in 1886 — at a time when she was already married with children. She adopted the stage name a year later, in 1887. She was made Dame Commander of the British Empire in 1918. She died 1931, aged 69, in Sydney, Australia, of septicemia (bacteria in the blood) brought on by an unsuccessful face lift.

The phrase “Melba toast” is often used to describe something bland and uninteresting, owing to the taste of boxed, commercial Melba Toast.

This web site generates income from affiliated links and ads at no cost to you to fund continued research · Information on this site is Copyright © 2022· Feel free to cite correctly, but copying whole pages for your website is content theft and will be DCMA'd.
Tagged With: Australian Food, British Food