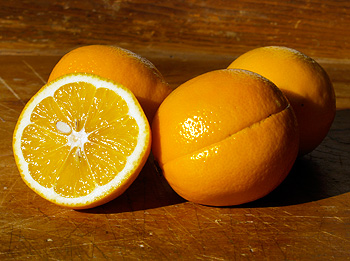 Meyer lemons are a cross between a lemon and a mandarin. At 5 to 8 cm in size (about 2 to 3 inches), they are smaller than other lemons.

They grow on an almost thornless tree. As the lemons mature, they go from greenish to yellow to an almost orangey-yellow. The skin is smooth and thin, with less bitter white pith under it than other lemons.

Meyers are sweeter than other lemons, and much less tart tasting. The aroma is more like orange mixed with lime. These are lemons that you can even eat raw, without a sweetener added, though the downside is that the rind won’t give you the zap that zest from other lemons will. The thin skin is, however, edible raw.

The thin skin makes Meyer lemons tough to ship, store and handle on a commercial scale, like other lemons. Consequently, they are still hard to find commercially, though people are very enthusiastic about them when they do come across them.

Meyer lemons have a pH of around 2.6:

Meyer lemons won’t store as long as other lemons. Put in a plastic bag and refrigerate for up to a few days. 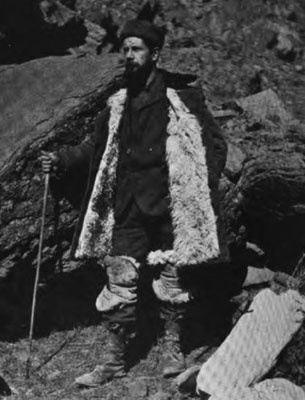 Meyer lemons originated in China. They were grown there for at least a few hundred years prior to being introduced to America in 1908.

They were sent to America by Frank N. Meyer (1875-1918), who worked for the US Department of Agriculture. Meyer was hired in 1905, at the age of 30, to travel parts of Asia to collect and send back plant species. By 1918, he had sent back close to 2,500 species to America. In May 1918, as he was preparing to return to America, he died under mysterious circumstances on the Yangtze river near Shanghai.

Up until the 1980s, the Meyer lemon tree was primarily grown in America as an ornamental or by home gardeners.

Credit is generally given to Alice Waters of Chez Panisse restaurant in Berkeley for popularizing Meyer lemons as a food item after that.