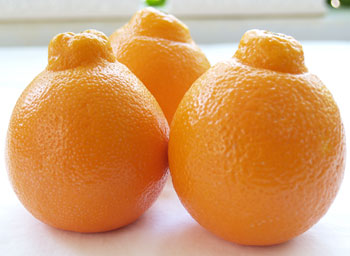 Minneolas are large tangelos with a thin, pockmarked, reddish orange skin that peels easily. They have a stubby neck at the stem end.

Inside, there are 12 segments that separate easily, and few seeds, just 7 to 12. They fruit is sweet and juicy, with just a hint of sourness.

The tree, which has large dark green leaves, is cold hardy, though the fruit is not.

The fruit can be harvested for processing at the end of December, but for the best taste for eating out of hand it should be left on the tree until the end of January or start of February.

Minneola was developed from a cross between Duncan Grapefruit and Dancy Tangerine (as was the Orlando tangelo) by the United States Department of Agriculture Citrus Breeding Programme in Eustis, Florida.

It was released commercially in 1931.

The Minneola is named after Lake Minneola in central Florida. The lake itself was given its name sometime after 1884 by a Canadian emigrant, George W. Hull. Previously the lake had been called “Cow House Lake”, which probably wouldn’t have made such an appealing name for this fruit.

Some think the stubby neck attached to the fruit make it look like a bell, thus one of its synonyms “Honey Bell”, also spelled “Honeybelle”.