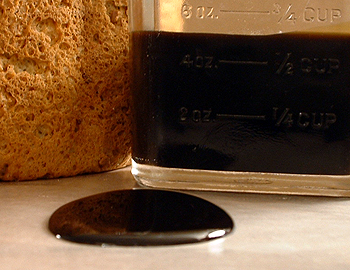 Molasses is a very thick, sticky refined syrup made from what’s left over after sugar is made from sugar cane juice.

In Costa Rica, dirt roads are sprayed with molasses to keep the dust down.

This is the highest grade of molasses. It is made from sugar cane juice that hasn’t had any sugar extracted from it.

Barbados molasses is made from the first boiling of the juice after sugar has been made. It is the lightest colour molasses, as well as the sweetest and mildest tasting.

This is the molasses that you can use at the table, on pancakes or waffles or buttered bread. It is about 65% sucrose. 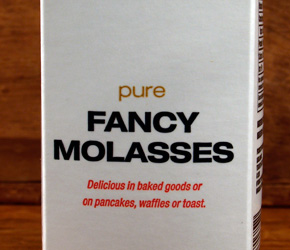 Dark molasses is made from sugar cane juice after it has been boiled a second time to extract yet more sugar. Use in cooking as an ingredient.

This is the molasses that is probably meant if a recipe just says “molasses” without specifying. It is about 60% sucrose. 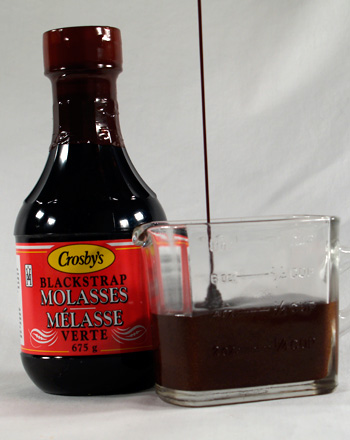 Blackstrap molasses is made from sugar cane juice after it has been boiled a second time to extract yet more sugar. By this point, there isn’t enough sucrose left to make it taste sweet, so it almost tastes bitter. It is very thick, and because the sugar has been carmelized through each successive boiling, it is such a dark brown that it’s almost black. It can be used for cattle feed, making alcohol or rum, or sold to consumers if sweetened with something such as corn syrup. It is the last grade of molasses to be made. It is about 55% sucrose.

This is a product made by some manufacturers. It is a blend of fancy and blackstrap. The blend makes a molasses that has some of the more pronounced flavour and colour of blackstrap, without the bitterness of blackstrap.

Sulphured molasses is not a particular type of Molasses per se, as the ones above are, but rather a category of Molasses that has been treated with sulphur dioxide to help preserve it — it prevents the growth of yeasts and moulds. The downside is that the sulphur also makes the Molasses a bit bitter and stronger tasting. Most Molasses sold to home consumers is unsulphured. Make sure that you’re using unsulphured if you’re putting it into a yeast-risen recipe, because the sulphur will kill the yeast and ruin your recipe. 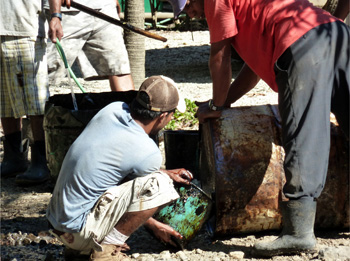 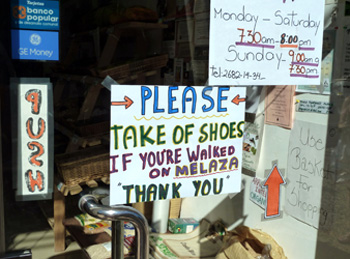 Shoppers requested not to track molasses inside store
© Leclaire & Schenk

Grease or oil your measuring cups or spoons with some of the grease or oil from your recipe before measuring molasses, or it could be as much work persuading it to get out of the measuring cup as it was to get it in. Or dust with flour, depending on what you are making.

Honey or treacle, measure for measure. Do not substitute Blackstrap molasses for another molasses.

There is a nutritional advantage over sugar, but the advantage is so minuscule as to be completely meaningless. Don’t believe the lines such as “high doses of iron” or “excellent source of calcium”. You’d have to eat so much of it, you’d have a completely different health challenge as your teeth would fall out.

If you are watching how much sodium you eat [Ed: the recommended daily is 1500 mg] , note that the lower grades of molasses can contain a great deal more sodium than do the higher grades, and that sodium can vary from brand to brand. Some Blackstrap molasses contain 70 mg or more of sodium per tablespoon; whereas other brands of Blackstrap, or a Fancy Molasses, will contain 0 mg per tablespoon. Check the label if you want to be in charge of adding the salt to your baked beans.

Store 6 months on the shelf, or 1 year in refrigerator. Some manufacturers advise not to refrigerate it, though many people do (in the same way that they also refrigerate Lea & Perrins, etc). Molasses that crystallizes in storage can be restored by a gentle nuke in the microwave.

Molasses used to be far less expensive than sugar, so it appears a lot in older recipes.

Molasses was used a lot in baked goods and confections. It was used in practically every dessert. It was also used for savoury food dishes, particularly baked beans and pork. It was very important in the life of the American colonies.

Its decline in popularity started about 1880, as sugar started to get cheaper. After the First World War, sugar became actually cheaper than Molasses, so the preference for sugar in recipes was complete. The change happened very fast — by 1919, people had basically made the switch.

This web site generates income from affiliated links and ads at no cost to you to fund continued research · Information on this site is Copyright © 2023· Feel free to cite correctly, but copying whole pages for your website is content theft and will be DCMA'd.
Tagged With: Acadian Food