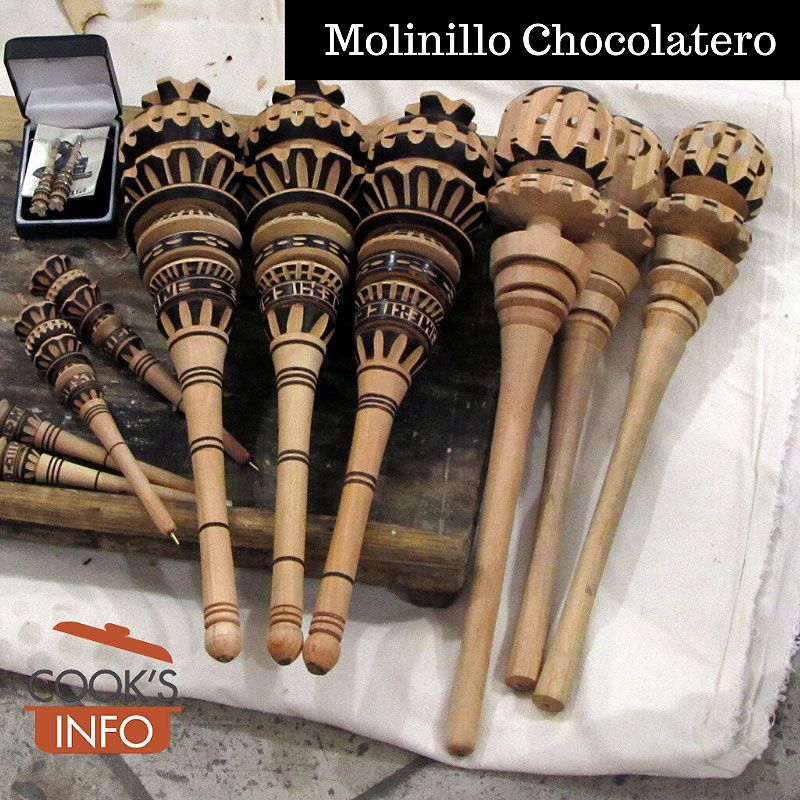 A molinillo chocolatero is a stirring tool used in Mexico to froth up chocolate or coffee drinks, as well as atole and champurrado. It usually has several different rings carved on its business end, which help produce increased froth.

Some translate molinillo chocolatero as a “whisk.” As it doesn’t have any tines, though, as most English-speakers would expect a whisk to have, it’s perhaps best to start describing it as a spinning top attached to a long handle. The “spinning top” part is ridged and / or serrated, either vertically or horizontally. Some more utilitarian ones might put you in mind of a wooden gear piece; some are more elaborately-carved, almost baroque in their design and styling.

In any event, a molinillo chocolatero is used to achieve the same purpose that a whisk would, but in a smaller, more confined space (in a cup.)

Larger ones are available for use in pots.

You put the “whisk” part into the chocolate drink, and rub the handle back and forth between the palms of your hands, causing the business end in the drink to spin about. The spinning motion creates a froth. You need to continue for 2 to 3 minutes to produce enough froth.

Some molinillo chocolateros are part of a covered chocolate pot set, with the pot having a spout and handle for pouring, and a hole in the lid. You pass the molinillo through the hole in the lid, put the lid on, and proceed to spin it. The hole helps to guide it.

Spinning the molinillo is a fun activity for children.

Molinillo chocolateros were invented by Spanish colonists sometime in the 1700s.

A Mexican children’s rhyme is based on using a molinillo. Children will rub their hands in the air while reciting the poem, pretending that they are using a molinillo, and repeat the poem several times, each time faster.

This web site generates income from affiliated links and ads at no cost to you to fund continued research · Information on this site is Copyright © 2023· Feel free to cite correctly, but copying whole pages for your website is content theft and will be DCMA'd.
Tagged With: Mexican Chocolate, Treen, Whisks