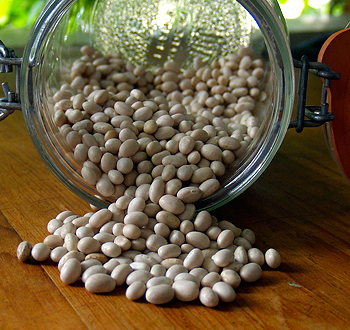 Navy beans are right up there at the top of the list of beans that are “hard to digest”, which is the polite way writers have of saying making you “windy.”

But, they are a staple of many people’s diet in the English-speaking world, because they are the most common bean used to make baked beans, whether at home in the oven, or from the store in a tin.

Soak beans overnight in cold water in a large pot.

In the morning drain in a colander, then tip drained beans back into the pot. Cover VERY generously with fresh water. Put pot on stove, cover, bring to a boil, then reduce to a slow simmer. Let cook for 1 ½ to 2 hours until the beans are soft.

Navy beans must be soft after the initial cooking: they won’t soften up anymore during any second cooking phases with sauces, etc. To test, take a spoonful out, drain, let cool a few minutes, then put them in your mouth: they are ready when you can squish them with your tongue against the roof of your mouth. The skins should have started bursting before they are ready to even test.

In the directions below, the purpose of the cooking oil is to help prevent burst bean skins from clogging the steam-release vent.

Optional to all the below: a bay leaf or two.

Always check and clean the lid and (particularly) the vent of your pressure cooking after cooking beans in it to ensure there are no stuck bean skins anywhere.

Great Northern Beans, but don’t cook those beans for as long as navy beans as they go softer faster.

If your dried navy beans are more than a year old, note that pre-soaking before cooking is highly recommended for them, that cooking times will be longer, and that despite this, they or their skins may still end up a bit tough. (A few people say not to even bother trying to cook them, but most people disregard them.)

At one time, Navy Beans formed part of the standard rations for the U.S. Navy, and it is believed that the name we use for them came from there.