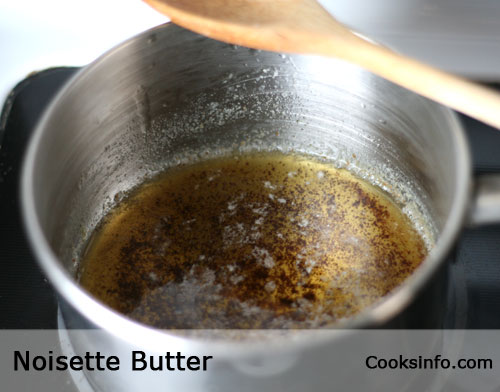 Noisette Butter (meaning “nut butter” in French) is a simple sauce that is made soley from butter.

It is butter that has been melted and cooked until it starts to turn light brown, but not as dark brown as for brown butter.

It is called “nut butter” because the browning gives it a tawny, nut colour, and also gives it a bit of a nutty taste.

It is used as a sauce for brains (calves’ or lambs’), eggs, poached skate or boiled vegetables. Also good with crêpes and financiers.

The butter used is usually unsalted.

If Noisette Butter is being served on its own on the side, some lemon juice is added.

Heat 4 tablespoons of butter over medium heat in a heavy-bottomed saucepan. When several small brown bits start to appear in the bottom of the pan, get it off the heat immediately.

The butter will develop brown bits in it; don’t strain those out, even though a few people might advise to. Those are the flavour bits you are working to develop. In this regard, it’s the opposite of Indian “ghee butter”, where you strain the solids out deliberately so that there are none to brown.

Starting with 4 tablespoons of butter will yield 4 servings of 1 tablespoon each.

This web site generates income from affiliated links and ads at no cost to you to fund continued research · Information on this site is Copyright © 2022· Feel free to cite correctly, but copying whole pages for your website is content theft and will be DCMA'd.
Tagged With: French Sauces