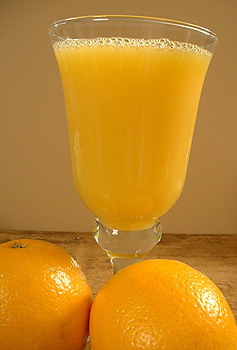 Commercial orange juice tastes orangier than orange juice that you have squeezed yourself from fresh oranges. The reason for this is that oranges meant for juicing can be left on the trees longer to develop fuller flavour.

Before harvesting the fruit, producers will take some sample fruit and juice it for testing. The testers look for acidity and for something they call “brix.” Brix is sugars in the orange. The balance of acidity and brix will determine how good the orange juice will taste.

When they are ready, the oranges are harvested and washed. Machines first prick the skins to let flavourful oils flow out of them. This orange oil is sold separately. The whole oranges then pass into the juicing machines for squeezing.

The peel, pulp and seeds are, obviously, “waste products.” These aren’t thrown out, though. Another machine chops them up, squeezes any remaining liquid out of them (this is made into “citrus molasses”, which can be used as livestock feed, or sold to the brewing industry), then they are dried to become livestock feed.

Alternatively, the peel may be separated out, and processed for making pectin from (orange peel is very high in pectin), or the peel can be sold to another business that makes candied peel or marmalade. The pulp is often separated out as well, then added back into some of the juice batches that will be sold to consumers who prefer some pulp in their juice.

Though 90% of Florida oranges are grown for juice, one half of all the world’s orange juice is produced in Brazil. Most Brazilian orange juice exports are in the form of concentrate. Only 1% of the orange juice that Brazil produces is consumed domestically (2004 figures), as Brazilian consumers still have the habit of squeezing their own orange juice as they need it.

California navel oranges are very juicy, but aren’t often used for juicing as their juice turns bitter unless it is drunk right away.

Orange juice consumption in America is dropping off a bit (as of 2005), owing to competition from other new fruit juices coming on the market (such as cranberry), and owing to orange juice being seen as high in carbohydrates at a time when low-carb diets are popular.

The fruit is juiced. Some water is extracted via heat and vacuum to concentrate the juice. The concentrate is then shipped by tanker to a packager where water is re-added, the juice is pasteurized and then packaged. The concentrate can be sold as frozen, or made into and sold as reconstituted juice.

For Orange Juice to be labelled “fresh” in America, it can’t be made from any concentrate, either dried or frozen. But to really get the point home to consumers, it’s also described as “not from concentrate.” Fresh Orange Juice, as well as Frozen Concentrated Orange Juice, is sold with varying levels of pulp in it.

started to be made in the 1980s, at a time when there was concern that the American public wasn’t getting enough calcium. Calcium is added so that there is more calcium in the Orange Juice than would be naturally present.

When juicing an orange, roll it first on the counter while pressing down on it to loosen the juices, or zap in microwave for 30 seconds, then let stand for a few minutes.

Fresh Orange Juice sold in stores is usually pasteurized before being sold. Pasteurization both gives the product a longer shelf life, and makes it safer — the oranges are pressed in their skins, after all, and the skins could be contaminated with bacteria such as E-coli. The juice is heated very quickly, and pasteurized the same way that some apple cider is, using HTST Pasteurization.

Orange Juice, once squeezed, loses 20 percent of its vitamin C in 8 hours at room temperature, and in 24 hours in the fridge.

Juice in cartons can be frozen if you first pour out of some the juice in it first, enough to allow room for the juice to expand when frozen.

Orange Juice powder was first produced early in 1945 by the National Research Corporation in Boston. A company called the Florida Foods Corporation was created to supply a huge order for powdered Orange Juice for the U.S. Army that same year. Even though the army cancelled its order, owing to the end of the war, and even though the powder creation process proved more difficult than the company had foreseen, the company stayed alive by switching to Frozen Orange Juice Concentrate. A Boston advertising agency came up with the name for their Frozen Orange Juice Concentrate product, and the company switched its name to match that of the product: “Minute Maid”. The “Minute Maid” company was purchased by Coca Cola in 1960.

The Florida Orange Industry has long been on the guard for foreign competition. In 1930, a tariff of 70 cents per gallon was placed on imported citrus juice by the Smoot-Hawley Act. The US was forced to lower that by half to 35 cents by GATT agreements in 1947. When President Kennedy wanted to remove the tariff entirely, they fought and defeated the initiative. Since then, the industry has focussed its efforts on battling Orange Juice from Brazil — not on the basis of quality or other measures, but by trying to make sure that tariffs are kept in place to artificially force up the costs of importing Orange Juice from Brazil.

The tariffs keep the price of Orange Juice in America about 50% higher than it would be without them.

This web site generates income from affiliated links and ads at no cost to you to fund continued research · Information on this site is Copyright © 2023· Feel free to cite correctly, but copying whole pages for your website is content theft and will be DCMA'd.
Tagged With: Juice