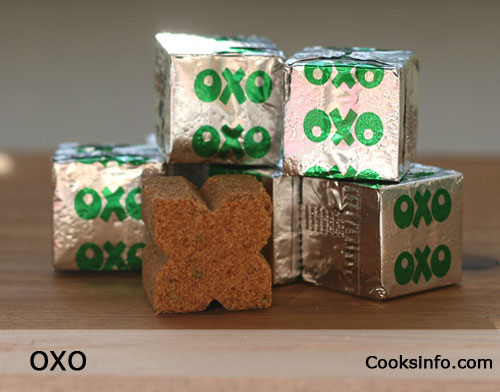 OXO is a cooking ingredient condiment used as a flavour boost to gravies, stocks and stews. It is available in chicken and beef flavours, as well as vegetable and lamb, Beef is the most well known.

It has been sold for most of its product lifespan in small cubes wrapped in foil to help protect them from dampness. It is now also sold as a powder in small sachets for making gravy with, as well as easy-dissolving granules to make a lump-free gravy base.

Some people like mixing OXO up and drinking it straight from a mug.

In spring 2011, Premier Foods, the maker of both OXO and Bisto, announced that both products would become available as premium products, in the form of paste in a squeezy tube. The regular cube form would continue to be available. The price comparison would be 64p for eight OXO cubes, vs double, £1.29 for the equivalent in paste form in a tube. The OXO tube flavours at first would be beef, chicken and vegetable; the Bisto flavours would be beef, chicken and onion.

OXO started life with the name of Liebig’s Meat Extract. The product acquired the name of OXO in 1899. OXO was registered as a trademark in 1899 in Europe; in Great Britain in June 1900.

At first, OXO was sold as a liquid, described on the jar as “fluid beef.” The OXO people started making cubes in 1910. The cubes were easier and cheaper to ship, and more appealing perhaps than the brown liquid. The bottle was also more product than a family would use in a reasonable amount of time. Cubes provided a smaller quantity that could be sold for a lower price, so more people would be inclined to buy it. The cubes were individually wrapped, and then packaged in tins with lids of quantities of 6, 12, 50 or 100. Liquid was still sold, but the cubes proved to be very popular with poorer people.

1911 – The first OXO branded cookbook was published;
1914 – Cubes were part of rations for British troops during World War 1;
1915 – The second OXO branded cookbook was published;
late 1920s – OXO bought a spot on the south side of the Thames in the Blackfriars area of London, the site of a former power station belonging to the General Post Office. They built the OXO tower there. Advertising was restricted along the river, so they had their name OXO spelt out in the pattern of the bricks on the tower.
1929 – OXO reformulated the cubes to make them dissolve more easily;
1955 – The first OXO television advertisement;
2003 – Campbell’s purchased OXO from Unilever.

The company advertised many special OXO-branded product offers over the years, from baby rattles, to lighters for troops in World War I, to dolls and dinky toys. Their trading cards are particularly well known; the trading cards starting back in the 1870s when the product was still called “Liebig’s Extract of Meat.”

No one seems certain where the name OXO comes from, with most food writers repeating the hoary old chestnut of a dock worker having scrolled O X O on the side of a crate of Liebig’s Extract of Meat to distinguish it from crates of other products — though with no explanation of why on earth a simple X wouldn’t have done the job. No one to date seems to have investigated the possibility of a link with the word “ox”.